Why Ukraine Is Dying A Slow Death (Literally) 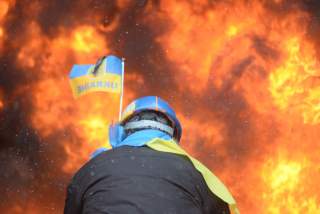 Ukraine’s independence from the Soviet Union in 1991 proved to be an unremitted economic catastrophe, which ultimately made parenthood unaffordable for many Ukrainians.

Ukrainian industrial production reduced by more than half from 1991 to 1996—a bigger drop than what the Soviet Union experienced during World War II when half the country was occupied by Nazi Germany, and 24 million people, both civilians and military, were killed.

With the Soviet Union’s breakup, many Ukrainians saw their life savings basically disappear overnight. Hyperinflation from 1992 to 1994 left about 80 percent of Ukrainians in poverty and roughly one-quarter of the population unemployed.

The economic meltdown dissuaded many Ukrainian families from having children. Consequently, Ukraine’s female fertility rate fell precipitously continuously throughout the 1990s, reaching a low point of 1.1 children per woman in 2000.

By 2016, the fertility rate had slightly recovered back up to 1.5. This is, however, still below the replacement fertility rate of at least 2.1 needed for zero population growth in developed countries.

“Since 1991, there have been always more deaths than births in Ukraine,” Fedets said.

Ukraine’s abortion and marriage rates have both declined since the Soviet Union’s breakup, underscoring Ukrainians’ reluctance to start families and have children.

The reduction in Ukraine’s abortion rate has been more dramatic.

In 1990, according to the World Health Organization, Ukraine registered about 1,550 abortions for every 1,000 births—about 7.8 times higher than the average rate that year among countries that would ultimately comprise the European Union in 1993.

However, by 2013, the last year abortion data for Ukraine was available, the number of Ukrainian abortions per 1,000 births had fallen to 166—which was lower than the EU average of about 220 that year.

According to Ukrainian analysts, the precipitous drop in Ukraine’s abortion rate after 1991 is likely attributable to better family planning education, and the more widespread use of contraceptives.

“Shortages of birth control devices lasted throughout the Soviet era,” Deborah A. Field wrote in her 2007 book “Private Life and Communist Morality in Khrushchev’s Russia.”

“Despite the pleas of doctors and health officials, contraceptive production was never made a national priority, leaving abortion and abstinence as the two forms of birth control available to most women,” Field wrote.

Today, legal abortions in Ukraine cost about $180. But the costs are not limited to the procedure itself. Ukrainian women also have to pay for a three-day hospital stay and a post-abortion treatment protocol, which collectively double the overall cost of the procedure to almost $400.

In a country with an average monthly salary of about $164, abortions are, consequently, cost prohibitive for many Ukrainian women.

In contrast, a month of birth control pills from a pharmacy in Kyiv costs between 150 to 500 hryvnias (about $5.40 to $17.80), depending on the brand and type. A prescription is not needed.

According to UNICEF, 52 percent of Ukrainian women currently use a method of contraception.

Depopulation is a major challenge for Ukraine’s economic and political development. For its part, the Ukrainian government has introduced measures to reverse the trend, such as a financial assistance program for new parents.

While government assistance relieves some of the financial burden of parenthood, reversing Ukraine’s population decline will ultimately depend on the country’s economic and political stability, and an end to the war.

“Ukrainians want to live a peaceful and thriving life in their country and I think it is a reasonable goal,” Fedets said.