Why Ulysses S. Grant Was One of America’s Greatest Leaders 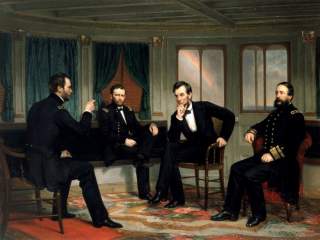 Friends at the Ulysses S. Grant National Historic Site near St. Louis tell me most visitors arrive with little knowledge of Grant—but leave with deep appreciation.

In my biography of Abraham Lincoln, I wrote of Grant, the decorated Civil War general, but I now confess: I did not fully know the man. Grant’s rise to fame has always remained something of a mystery. As I dug deeper, I discovered his intellectual journey was filled with surprises, detours, questions, and insights. His personality is a palette not unlike the rich colors he learned to paint with at West Point.

After growing up on the Ohio frontier, young Ulysses was accepted at West Point, from which he graduated in 1843. He subsequently served with honors in the Mexican War and then returned to marry Julia Dent, who accompanied him to his assignments in New York and Michigan over the next several years.

Forced to leave her behind when he was posted to the Oregon Territory and California between 1852 and 1854, he grew so heartsick that he resigned his commission. And for the next seven years he struggled to make a living for himself, his wife, and his four children, mostly on his pro-slavery father-in-law’s property outside St. Louis.

Then came the Civil War, and everything changed. In a story of transformation, Grant moved in the next seven years from clerk at his father’s leather goods store in Galena, Illinois, to commander of all the Union armies, and finally to being president of the United States. His remarkable rise constitutes one of the greatest stories of American leadership.

Although he was renowned at the time of his death in 1885, it was not long before Grant began to fall from favor. Historians writing under the influence of the Southern “Lost Cause” theory of the war lifted up Robert E. Lee and the Confederacy in “the War of Northern Aggression.”

In their retelling, Grant became the “butcher” who supposedly countenanced the merciless slaughter of his soldiers to overwhelm by sheer numbers the courageous Southern army.

When Grant is remembered, he is too often described as a simple man of action, not of ideas. Pulitzer Prize–winning Grant biographer William S. McFeely declared, “I am convinced that Ulysses Grant had no organic, artistic, or intellectual specialness.” Describing Grant’s midlife crisis: “The only problem was that until he was nearly 40, no job he liked had come his way—and so he became a general and president because he could find nothing better to do.”

No. I believe Grant was an exceptional person and leader. A popular 1870s medallion depicted George Washington, Abraham Lincoln, and Ulysses S. Grant as the three great leaders of the nation.

Lionized as the general who saved the Union, Grant was celebrated in his lifetime as the “hero of Appomattox,” the warrior who offered magnanimous peace terms to Gen. Robert E. Lee. Elected president twice, he would be the only president of the United States to serve two consecutive terms between Lincoln and Woodrow Wilson.

Even with the scandals that tainted his second term, he retained enormous popularity with the American people and probably would have been elected to a third term in 1876 if he had chosen to run. But let’s not get ahead of our story.

The nature of Grant’s greatness is a puzzle with many pieces. Like his namesake, the Greek hero Ulysses, his contemporaries came to know him as a tragic hero who had failed again and again before he succeeded.

The frontier boy who did not like to hunt became the great soldier. His friendship with William Tecumseh Sherman seemed to outsiders like a pairing of opposites. In his transformation through the Civil War, he combined modesty and magnanimity. His quiet strength energized the soldiers who served with him. He could tell a story that often ended with self-deprecating humor. He could be decisive yet understated, strong but gentle. He possessed the trait he most admired, what he regularly called “moral courage.”

Although a good judge of character in the military, Grant sometimes failed in politics to appreciate the motives and morals of those he invited into his administration. His capacity for self-improvement and willingness to confront his mistakes won over leaders such as Hamilton Fish, his eminent secretary of state.

At the end of his life, Grant wrote one of the finest memoirs in American letters, which modern presidents invariably refer to when they write their own. In this last piece of the puzzle, one question must be asked: Accomplishing such a literary feat required extraordinary gifts; did we miss something along the way?

Grant loved his wife, Julia, his four children, horses, the theater, his Missouri farm, painting, travel, Mexico, and novels. A maxim declares: “Good writers are invariably good readers.” What did Grant read? The breadth of his reading, beginning with the long list of novelists he read at West Point, hints at a story of his imaginative depth yet to be told. He was not an eloquent speaker like Lincoln nor a fiery personality like Theodore Roosevelt; his leadership was of a different kind.

In my biography, “American Ulysses,” I bring into conversation elements of Grant overlooked or undervalued. Early on I became convinced I could not understand Ulysses’ story without understanding Julia’s story. Too often discounted or marginalized, she occupies a larger place in my book. Others might describe her as plain, but to Ulysses she was beautiful in ways that counted—in her gentleness, warmth, and joy.

Their young love, more than they initially understood, would be tested by families who vigorously defended opposite sides of the slavery question. All Ulysses’ friends observed his “devotion” to the woman he called “my dear Julia.” She became his anchor in the furor of many storms.