Why a U.S-China War over Taiwan Won't Be Anything Like the Syria Strikes 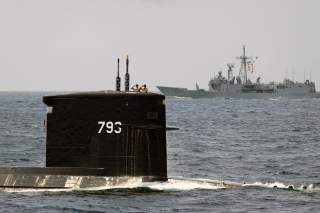 Great powers have a habit of intervening to shield weak allies from rival great powers and advance their own purposes. Last week it was Russia vowing to shoot down American missiles bound for Syrian chemical-weapon sites. Judging from recent Chinese words and deeds, next week could see the U.S. Navy attempting to repulse a Chinese assault on nearby Taiwan.

The Chinese Communist Party depicts the island as a wayward province and has pledged to restore mainland sovereignty there—by force if necessary. As China amasses military power, improving its chances of imposing a solution at manageable cost, it may define necessary more expansively. Power begets ambition.

The prospect of maritime war is nothing new to the Western Pacific. Sometimes the possibility of a U.S.-China war hovers in the background. Sometimes it vaults into the foreground, as in recent days. On Wednesday China’s navy held live-fire drills in the Taiwan Strait at short notice, ostensibly to “deter separatists” and “draw a red line to the U.S. and Taiwan.” The exercise came on the heels of a South China Sea naval parade ballyhooed as China’s biggest in 600 years.

That is, the parade was the biggest since the age of Admiral Zheng He and the Ming Dynasty, when China (briefly) ruled the Asian seas. President-for-Life Xi Jinping likes keeping company with grand figures from China’s past—and using them for branding and messaging in the here and now.

The standard line is that Zheng He reestablished Chinese diplomacy vis-à-vis Southeast and South Asia, and thus scored a triumph of nonviolent naval strategy. And so he did. That’s the smiling visage Beijing likes to put on its regional diplomacy. But Ming benevolence constitutes only part of the tale. Zheng He also crushed a hostile fleet near Malacca, sent troops into combat on the island of Ceylon, and staged shows of force during his voyages.

He prevailed without fighting when possible but fought when need be—at sea or on land. By casting today’s People’s Liberation Army Navy (PLA Navy) as the heir to the Ming admiral’s “treasure fleet,” Xi Jinping puts the region on notice that—now as six centuries ago—a mailed fist nestles within the velvet glove of Chinese diplomacy.

Suppose Taipei and Washington step over Beijing’s red line, setting armed strife in motion. How would a Taiwan Strait clash unfold? Well, since Xi evidently intended the live-fire exercise in part as a rejoinder to American actions against Russian client Syria, let’s compare a hypothetical cross-strait war to the Eastern Mediterranean imbroglio. Three glaring differences leap out. And all three portend ill for America and Taiwan.

First of all, the strategic setting in East Asia is at once more and less permissive for U.S. naval and air forces than in the Eastern Mediterranean. More permissive because the vast emptiness of the Pacific Ocean to Taiwan’s east affords naval task forces ample maneuver space. Denizens of Europe, the Levant, and North Africa who once styled the middle sea the “Great Sea” never got a load of the Pacific.

Off Syria, threats to U.S. forces could emanate from any point of the compass, not to mention the wild blue above and the depths beneath. By contrast, Pacific waters resemble a featureless plain. Navies thrive on the open sea, where they can flit hither and yon. With cunning and some luck, they can elude foes’ efforts to detect, track, and target them. In theory, then, the Western Pacific is a combat theater made for the U.S. Navy.

But in practice the surroundings are far more forbidding than the Mediterranean Sea. Any naval action will take place within reach of PLA Navy ships of war. Chinese commanders will array shore-based firepower—mainly missiles and missile-toting warplanes—to back up the fleet. A detachment of U.S. and allied forces squared off against a Russian detachment in Syria. The encounter was modest in scale. A detachment of U.S. forces will confront the combined might of China’s armed forces in the Pacific. An encounter there could sprawl across East Asia.

Only snake-oil salesmen would prophesy with confidence that a fraction of one armed force—even a stronger one—will vanquish the whole of a near-peer force. It’s even more doubtful when the battle takes place on the latter’s home ground. After all, the pugilist protecting its turf lies close to scenes of action, knows the physical and cultural terrain better than any outsider can, and has the option of hurling the bulk of its forces into the fray to overpower antagonists fighting far from home.

Second, the politics of a cross-strait war is likewise sobering. The great powers that smote Syria—the United States, France, and Great Britain—saw only a limited stake in the action. They only wanted to punish the Assad regime for using chemical arms. They had no desire to overturn the regime. Such a goal would have mandated that they invade Syria in full force, defeat the Syrian military and its Russian protectors, and install a viable replacement regime in Damascus. Judging from hard experience in Afghanistan, Iraq, and Libya, that would be an expensive, open-ended grind fraught with peril.

But that wasn’t the case last week. Almost any measure can qualify as punishment. Western leaders reserved themselves the liberty to order a volley of missiles, halt the action afterward, and declare victory. Even one round on target would let them claim to have meted out retribution.

A cross-strait conflict wouldn’t be such a token affair. The great power that would smite Taiwan—namely China—would set what strategists term an “unlimited” aim. China, that is, would put an end to the Republic of China’s (ROC) political existence. Imposing sovereignty on a self-governing society like Taiwan would involve destroying the ROC armed forces, and then the democratic regime in Taipei. That’s a serious goal and would summon forth maximum resistance from the island’s defenders. In turn Beijing would have to commit as many forces as necessary to the endeavor for as long as it took.

China would have to be all in.

And so would America if it hoped to defeat China. That being the case, the United States must prize Taiwan’s independence at least as much as China prizes extinguishing it. Think about the plight that would have beset Russia had NATO, rather than administer a few strikes, mounted a full-scale assault against the Assad regime last week. That would have pitted Russian forces against a united Western alliance, far from Russian home bases. Preserving the Assad regime against such an onslaught would have demanded that Moscow expend massive financial and military resources.

Whether it would—or could—have done so is doubtful.

Such are the hazards of expeditionary ventures. That thought experiment reveals something about the hardships awaiting the U.S. Navy and affiliated joint forces off Taiwan. Americans must ask themselves whether they want it—it being the independence of a free people on Taiwan—enough to take on China under the mainland’s shadow, and to invest lives, treasure, and military hardware in the enterprise for long enough to beat back a cross-strait offensive.

Upholding the U.S. commitment to Taiwan would not come cheap or easy. If the leadership in Washington finds such an effort is worthwhile, it should start educating the electorate about the issues at stake now—lest Joe Six-Pack be caught-off guard by a Chinese attack, and withhold his support from the endeavor. Any effort will falter without fiery zeal from the American people.

And third, Taipei must take ownership of its own destiny. Geography and politics will be moot if it doesn’t. That’s because the war will be over before U.S. forces can fight their way to the battleground in the face of PLA anti-access and area-denial (A2/AD) defenses. There will be no U.S.-China war—just a China-on-Taiwan brawl in which the mainland is a heavy favorite.

I’ve likened anti-access to China’s offshore “crumple zone.” Rather than a rigid defensive shield, it’s a sacrificial component designed to collapse in a controlled way, much as the engine compartment and trunk in your car are designed to collapse in a controlled way should you get in an accident. These mechanical buffers absorb the shock of a collision, protecting what really matters—you, and any passengers sitting in the cabin with you.

Taiwan and the waters and skies adjoining it are what will really matter to PLA commanders in a cross-strait conflagration. If Chinese warplanes, missiles, surface craft, and submarines can engage U.S. naval forces at long range, they can help absorb the shock from the American offensive—and, if successful, slow it to a halt before it reaches the combat zone. At a minimum A2/AD will grant PLA forces time to subdue the island’s defenders.

Taipei must give U.S. rescuers that time back, and it must help keep American losses down, and fighting strength up. Missile-armed ROC Navy patrol craft can work in concert with shore-based rocketeers to mount a delaying action in the Taiwan Strait. Taiwanese air and sea forces can fan out to the island’s east, helping open a corridor for U.S. reinforcements to steam into the theater. They can keep China from winning quickly—and give the U.S. Navy time to puncture China’s offshore crumple zone.