Why U.S. Sanctions Are Unlikely to Deter North Korea 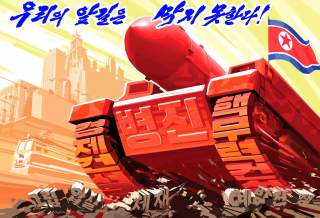 This past weekend, there was good news on the North Korea front. Yes, you heard that right; for a change, we aren’t talking about an underground nuclear test or another intercontinental ballistic missile launch screeching into the waters near Japan, but rather a unified message from the international community that Pyongyang’s antics are making it more enemies by the week.

After a month of negotiations between Washington and Beijing, the UN Security Council passed another resolution against North Korea that U.S. Ambassador Nikki Haley described bombastically as “the most stringent set of sanctions on any country in a generation.” Whether that is an accurate assessment, the Security Council’s most recent sanctions measure against Kim Jong-un, coming a week after he authorized two ICBM tests in three weeks, has the potential to cause a lot of damage to Pyongyang’s pocketbook—if the resolution is implemented stringently. North Korea’s meager exports (pegged at about $3 billion per year) could decrease by a third, a $1 billion decline in export revenue, which means Kim will have $1 billion less to throw at his nuclear and missile programs. Countries will no longer be permitted to import North Korean seafood, iron, iron-ore and coal. Nor will they be allowed to aid in the shipment of those goods if they traveled through North Korean territory on route to their ultimate destination. Equally significant, nations accepting North Korean laborers will be prohibited from accepting more of them onto their territory.

With punishments like these, why wouldn’t the Trump administration celebrate? Even President Trump was pleased about the outcome, tweeting that the “United Nations Resolution is the single largest economic sanctions package ever on North Korea. Over one billion dollars in cost to N.K.”

Politically, the Security Council resolution was a big win for a White House with very little to brag about after its first six months. But in the final analysis, the eighth round of sanctions in response to Pyongyang’s weapons of mass destruction programs will probably be forgotten in a few weeks. The United States—under three presidents and over a span of eleven years—has attempted to starve the North Koreans into abolishing their nuclear and missile capability, as if just piling on more economic restrictions will finally and irrevocably push Kim into disarmament. And yet time and again, Kim has resisted doing so; launches have continued, new missile models have been developed, nukes have been detonated, and Kim hasn’t neglected to remind anybody willing to listen that his glorious nation won’t think twice about raining nuclear hellfire on Washington, Seoul and Tokyo if his regime’s survival is at stake. To believe that last weekend’s measure in the Security Council will be the magic formula and buckle the knees of the North Koreans when seven prior sanctions packages have fallen short is like lending money to a penny-pitching cousin and expecting him to pay you back on time, with interest. It’s nice to imagine it, but reality will eventually slap you out of your daydream.

It’s a well-worn tradition in Washington policy circles to state that a quarter-century of U.S.-North Korea policy has been ineffective. But in this instance, the tradition is right; on North Korea, the United States has pulled out pretty much every tactic from the playbook.

Diplomacy was attempted and partially successful in the Clinton administration, but by George W. Bush's second year on the job, U.S. intelligence officials concluded that Pyongyang was secretly working on a uranium enrichment facility. A combination of carrots and sticks was implemented during the latter years of Bush’s tenure, but the North Koreans were so stingy on accepting strong and independent IAEA inspection protocols that time ran out before Bush could hammer out a deal. The strategic-patience policy of the Obama years was foreign-policy bureaucratese for piling up the economic pressure and waiting for Kim Jong-un to come to the table. The Trump administration, following in the footsteps of its predecessors, is essentially leaning on China to resolve the North Korean nuclear problem for the United States, forgetting—or maybe ignoring—that Beijing’s interests on the Korean Peninsula are not identical to America’s.

But one of the biggest reasons why Kim hasn’t been interested in negotiating is because the international community is demanding much, much more than what the North Koreans would even contemplate. Denuclearization, or what Ambassador Haley has expressed as “a stable Korean peninsula, at peace, without nuclear weapons,” sounds great for Americans, Europeans, and even Chinese, but it doesn’t sound particularly appealing to the North Korean officers goose-stepping in the central square of North Korea’s capital or the senior minister in Kim’s government. For a country with a GDP half the size of Vermont, whose conventional military is antiquated compared to its prosperous and ideological rival to the south, surrounded by much stronger neighbors with dynamic economies, North Korea’s nuclear weapons program is about all Pyongyang can boast about. To any other nation, nukes are a deterrent; to North Korea, it’s a deterrent as well as an integral part of its society—something of such importance that nuclear weapons are codified in the constitution.

Combine the emotional and symbolic impact of nukes and ICBM’s with the paranoia and deep appreciation of history that’s ingrained in the Kim dynasty’s psyche, and one needs to question whether the most generous agreement Washington can offer or the tightest economic embargo that the international community can assemble would even be enough to force Kim to dismantle his programs. We may have reached the precipice where negotiations with the North Korean regime about denuclearization is out of question. Although a cap on Pyonygang’s nuclear arsenal, a suspension of its missile development, and a moratorium on its ballistic missile testing could be within reason, there doesn’t appear to be much hope for dismantling every square inch of North Korea’s enrichment and plutonium facilities and a decommissioning of the nukes it already possesses.

The Trump administration was dealt a terrible hand on the North Korean nuclear problem. But it will only get worse if Trump and his national-security team continue to base their policy on denuclearization, which has gone from a realistic option to a mythical unicorn over the past twenty-five years.