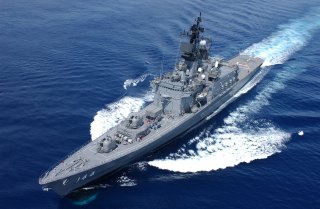 Until recently a naval war between Japan and China was not a serious proposition. As recently as the 1980s, China was a “green water” navy barely capable of protecting its own coastline, let alone projecting naval power several hundred miles away. Japan, on the other hand, had a large force of fully modern destroyers tasked with protecting sea lines of communication out to a thousand miles. As long as it stayed clear of the occasional large antiship cruise missile and volleys of unguided torpedoes, the Japanese navy could easily defeat whatever China threw at it.

That has changed. More than a quarter century of Chinese defense increases have amounted to an overall tenfold increase in military spending. Beijing’s defense spending, both official and unofficial, likely amounts to more than $200 billion—nearly five times as much as Japan’s roughly $43 billion. This has had serious implications for the Japan Maritime Self-Defense Force, as its potential Chinese adversaries are now better armed and trained than ever.

In considering any Japan-China naval war, we should be mindful of their respective naval doctrines. The Maritime Self-Defense Force is an almost purely defensive force, trained to escort convoys to and from Japan, conduct antisubmarine warfare, protect the country from ballistic-missile attack, and conduct humanitarian operations. It is defensively armed, with relatively few antiship missiles and no cruise missiles. Offensive operations, with the exception of amphibious landings to take back national territory, are unheard of. While this is a noble approach to warfare, it also makes it very difficult to terminate a conflict on Japan’s terms.

The People’s Liberation Army Navy (PLAN), on the other hand, is more open-ended in responsibilities. The PLAN has more of an offensive component, its pursuit of aircraft carriers being one obvious example. In addition to the growing number of offensive-minded aircraft carriers, PLAN warships are equipped with silo-launched YJ-18 antiship missiles, a launching scheme that gives Beijing’s fleet flexibility in dividing its ship-mounted missile silos between offensive and defensive roles. The PLAN has also sent the DH-10 cruise missile to sea, giving it a land-attack capability the JMSDF lacks.

As a result, we’ll imagine that in our future conflict both navies are poised against one another, with the Chinese force on the offensive and the Japanese on the defensive. The PLA Navy sends several large surface task forces into the East China Sea, one centered around China’s second aircraft carrier, tentatively known as Type 001A, and two surface action groups centered around Type 052D destroyers. Each will have a complement of Type 052B and 052C destroyers, Type 054A frigates, and even Type 056 corvettes. We’ll also assume several Type 093G cruise missile submarines are part of the battle.

On the Japanese side, we’ll see three similar task groups, one centered around the twenty-seven-thousand-ton “helicopter destroyer” Kaga and two centered around Kongo-class destroyers, with accompanying Takanami- and Akizuki-class general purpose destroyers acting as escorts. Japan will also have a handful of Soryu-class attack submarines in and around the area.

Who wins the matchup? The PLAN, with its ability to carry more antiship missiles, can bring greater offensive firepower to the battle—at the expense of air defense and antisubmarine missiles. PLAN commanders will have to think long and hard what is the greater threat to their ships—Japanese surface ships, submarines, or aircraft—and budget the limited space in their missile silos accordingly. In this case, we’ll assume the PLAN admirals have chosen to be cautious and decided to rely on their carrier and submarines for striking power. The two surface task forces will conduct diversionary operations and launch secondary attacks.

The PLAN task forces still have a number of ways to strike the Japanese. J-15 “Flying Shark” fighters could fly reconnaissance missions to locate MSDF task forces. One located, the Chinese carrier would then launch a full squadron of a dozen or more J-15s, each equipped with antiship missiles, to overwhelm MSDF air defenses. Ideally, this would be timed with attacks by PLAN submarines to hit the Japanese fleet from multiple threat vectors. The PLAN can even bombard Japanese port facilities with DH-10 cruise missiles, preventing the Japanese from refueling and reloading.

The Japanese side isn’t helpless, however. As an antisubmarine destroyer, Kaga holds seven SH-60K Seahawk antisubmarine helicopters, enough to keep PLAN attack boats at bay. The Kongo and similar Atago-class destroyers are very strong in air defense, with ninety and ninety-six Mk. 41 vertical-launch silos, respectively, each carrying SM-2 air defense missiles and ASROC antisubmarine rockets. As a result, there is a strong possibility that Japan’s defense can nullify the Chinese offense.

Offensively, Japan’s options are limited. Most Japanese destroyers are, like their American counterparts, limited to eight Harpoon or indigenous Type 90 antiship missiles. This would give a surface task force of four ships thirty-two antiship missiles—a not inconsiderable force—but would also put Japanese ships in range of the Chinese fleet. A better idea would be to attack the Chinese fleet, particularly the 001A carrier, with Soryu diesel-electric submarines. The PLAN is notoriously weak in antisubmarine operations, and a submarine attack has the best chance of success.

The Japanese/Chinese naval matchup is no longer the one-sided affair it used to be. The two sides are more closely matched at sea than they’ve been in more than a hundred years. Such a battle would also be influenced by factors outside the two fleets, including land-based air power, ballistic missiles, space assets, and even cyber. And of course there is always the U.S. Navy’s powerful Seventh Fleet. But increasingly, China has the ability to take on the Japan Maritime Self-Defense Force. Adding more aircraft carriers, more cruise missile submarines, or better training—all easily achievable conditions—could shift what is now a precarious balance decisively to the Chinese side.