Will Afghanistan’s Air Force Soon be Without Vertical Airlift? 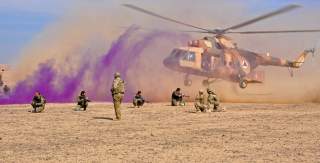 KABUL, AFGHANISTAN—The Afghan Air Force is one focal point in efforts to develop strong Afghan National Defence and Security Forces, with air power one of the major advantages of government forces over the insurgency. However, the attention nearly always lies solely on the Afghan Air Force’s combat capabilities, seemingly neglecting also important airlift, which will most likely pose a significant problem in the near future.

Even though less obvious, airlift is probably at least as – if not even more – important than attack capabilities. Of course, the ability to not only strike insurgents directly from the air, but also to preventively deter them from massing in larger formations is a powerful enabler and should not be underestimated. However, insurgents often don’t present clear targets that can be hit from the air without causing collateral damage that threatens to drive the population towards the insurgency (in fact, civilian casualties caused by airstrikes is a common propaganda narrative of the Taliban). Therefore, it could be argued that tactical vertical airlift which allows to swiftly deploy ground forces even into remote areas to engage and pressure insurgents with less risk of collateral damage would in many situations be more effective. In addition, given Afghanistan’s rugged terrain there are numerous remote outposts that rely on air supply by helicopter. Furthermore, helicopters also evacuate wounded soldiers from otherwise inaccessible fronts, which, if not readily done, can have a devastating effect on the morale of ground forces.

Nonetheless, airlift seems to be neglected as the Afghan Air Force’s vertical airlift fleet of Russian-made Mi-17 transport helicopters is already now strained and – contrary to the combat fleet of recently delivered A-29 light attack aircraft as well as MD 530F light attack helicopters – ageing and will soon reach the end of its lifespan. More specifically, the US Department of Defense in a report from December 2015 stated that „the (Afghan Air Force’s) Mi-17 fleet (…) is still unable to meet the ground forces’ demand“ and clarified in December 2016 that „at the current attrition and flying hour rates, the number of (Afghan Air Force) Mi-17s available for 2017 will be significantly diminished, and the Mi-17 fleet will become unsustainable by mid-2018, virtually eliminating the (Afghan Air Force’s) vertical transport and lift capability“. Further showing the neglect of airlift, the report from December 2016 also notes that the 13 of the total 47 Mi-17s of the Afghan Air Force that have been „configured with a fixed forward firing capability“ are frequently used as gunships, which „limits the (Afghan Air Force’s) ability to employ Mi-17s in support of other mission sets such as (casualty evacuation (CASEVAC)) and aerial resupply“.

Despite this looming elimination of the Afghan Air Force’s vertical airlift capabilities, plans to sustain the transport helicopter fleet were only recently announced and are not definitive yet. According to Adam Stump, a spokesman of the US Department of Defense, „the Department of Defense has determined that procuring U.S.-made helicopters is a more sustainable long-term solution to meet the requirements, given the higher-than-anticipated costs of maintaining Mi-17s, overuse and attrition problems, and legal restrictions on spending (Department of Defense) funds to maintain or buy more Russian helicopters“ and that an upgraded version of the US-made Sikorsky UH-60A BlackHawk medium-lift utility helicopter would be „the best available platform to meet the mission requirements of the Afghan air force“. However, while Mr. Stump added that the US Department of Defense had already requested funding to procure and modify 53 BlackHawks, it is not yet clear, whether or when US Congress will approve this funding.

But even if approved, the United States of America could not provide sufficient BlackHawks to the Afghan Air Force in time. The requested funding will at the best be approved in early 2017 and „the initial fielding of (BlackHawks) is currently projected to be approximately 24 months after funding is available due to the timelines for contracting, production and airworthiness testing“, according to Mr. Stump. Hence, even in the best case the first BlackHawks would not be available in Afghanistan before the 2019 campaign – long after the expected virtual elimination of the Afghan Air Force’s current Mi-17 fleet in mid-2018. This was confirmed by US Army General John W. Nicholson, commander of US Forces – Afghanistan and the NATO-led Resolute Support mission to train, advice and assist Afghan government forces, in a hearing on 9th of February 2017. And given that the BlackHawks would apparently be delivered incrementally, it might take even longer from the first delivery until a sufficient number of BlackHawks will be fielded in Afghanistan; not to mention the possibility of delays that are a common occurrence in such programs.

Although not directly commenting on the above, Mr. Stump assured that the US Department of Defense „will work with the Afghans and coalition partners to mitigate gaps in capability“, but didn’t give any further details. In this regard, Gen Nicholson’s written statement to the US Senate Armed Services Committee from 9th of February 2017 mentioned that „U.S. aviation and authorities (will be required) to bridge the gap“. However, the statement did not elaborate, whether and to what extent this would necessitate additional troops or authorities (which would seem likely though), raising further questions. This is also a new approach as Gen Nicholson previously stated in a press briefing on 2nd of December that „we need to sustain the Mi-17s long enough to bridge this period (…) until the UH-60s are fielded“ and that the United States of America is getting help from allies, such as Australia (which has apparently less legal restrictions in dealing with Russia), to fund maintenance on the Mi-17s. It is unclear, whether this alternative has been dropped by now. In any event, also this option would raise serious questions, as – in view of the US Department of Defense’s very clear statements, in particular in its latest report from December 2016 – it appears doubtful that maintaining a sufficient numbers of Mi-17s until the fielding of BlackHawks would be feasible. Apart from this, the US Department of Defense report from December 2016 hints at efforts to develop soft landing and air drop capabilities for the Afghan Air Force’s C-208s turboprop transport planes to „free Mi-17 helicopters for other mission sets“. While this might be indeed useful, it again seems unlikely that it will be sufficient.

Looking at a wider range of possibilities, the Afghan government could turn to other actors than the United States of America and its allies and, in fact, already did so. However, reports about the possible provision of aircraft by other countries such as Russia or China, even though sometimes apparently confirmed by high-ranking officials, so far all turned out to be incorrect (the exception to this was the delivery of four Mi-24 helicopter gunships (three at the end of December 2015 and the fourth and last reportedly in November 2016) to Afghanistan by India, which did not concern airlift though). Hence, it seems improbable that any other country than the United States of America is willing or able to provide the Afghan Air Force with aircraft on a scale that is large enough to have a significant impact. For example, The Hindu reported in late November 2016 that a discussed trilateral Afghan-Indian-Russo framework might restore currently grounded Afghan aircraft of Russian/Soviet manufacturing and that Indian teams sent to Afghanistan have already assessed the requirements. However, while a source familiar with this effort confirmed that the refurbishment of grounded aircraft is a long standing request from the Afghan side, he also stated that, as of mid-December, no final decision had been taken. The source also clarified that the number of „at least 40-50 helicopters of various types“ that could be restored according to The Hindu, is too high and that it would rather be only around 12 aircraft that could meaningfully be refurbished. This said, even in case such a trilateral effort should materialise, which is not at all clear, the number of restored transport helicopters would most likely be insufficient to close the expected capability gaps.

Given all this, it appears that in spite of the knowledge of the looming lack of Afghan Air Force vertical airlift capabilities, plans to supplant the current fleet of Mi-17s remain uncertain and will likely come too late. Accordingly, it looks like the Afghan Air Force will at least temporarily be without any or only dangerously limited vertical airlift capacities in the near future.