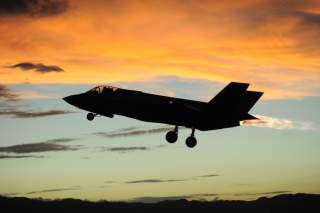 Earlier this week, Canada’s Conservative Party was swept out of office and replaced by a new Liberal government led by incoming Prime Minister Justin Trudeau. The rise of a new government means that Ottawa’s defense and foreign policy posture will change. One immediate casualty could be the Lockheed Martin’s F-35 Joint Strike Fighter.

Stephen Harper’s Conservative government had more or less decided to go ahead and purchase sixty-five of those stealthy single-engine F-35s, but Trudeau ran on a platform that explicitly states that a Liberal government will scrap the F-35 buy. Instead, a Liberal government would buy a cheaper alternative aircraft while strengthening the Royal Canadian Navy—which is in bad shape.

The F-35 program has been mired by controversy in Canada—mostly over cost. The Conservative government had low-balled initial cost estimates for Canada’s sixty-five aircraft buy. Ottawa’s initial estimates stated that the jets would cost $9 billion, but other Canadian government reports—including one from the Parliamentary Budget Officer—estimated the price tag to be much higher. At last report, Canada would be on the hook to pay $45.8 billion for the total cost of ownership for sixty-five F-35s.

For the Trudeau government, that’s a cost that is too high for Canada—which does not have a huge defense budget. Nor is there consensus that the F-35 was ever the right aircraft for Canada’s needs. Indeed, many have questioned if a single-engine stealth fighter would be rugged enough to operate in Canada’s vast, undeveloped and nearly unpopulated north. Airfields are few and far between—and most of those are not exactly the kind of pristine air bases the U.S. Air Force operates out of.

If Canada does ditch the F-35 and opt for a new competition, Boeing’s Super Hornet is the likely beneficiary. While Eurofighter’s Typhoon, Dassault’s Rafale and Saab’s Gripen are all likely to be on offer for a new Canadian tender, Ottawa has never purchased a non-American warplane in recent memory. Seamless interoperability with U.S. forces is always a paramount concern for the Canadian military.

Boeing has the advantage of being the incumbent. The Canadian air force already operates seventy-seven upgraded CF-18 Hornets—which are rapidly nearing the end of their operational life. But the Canadians are familiar with the Hornet and it has a proven track record of being able to operate in Canada’s unforgiving Artic reaches without any problems. It also has two engines—which is a major plus for Canada. While the F/A-18E/F is not the same airframe as the original Hornet, the aircraft offers an easy transition to a much more advanced aircraft. Moreover, it is already flown by the U.S. Navy, which gives Ottawa the interoperability it seeks.

However, Trudeau said that whatever follows the F-35 would be subject to an open competition. There is no reason Lockheed couldn’t bid the F-35 again—indeed Canada’s Seaking helicopter replacement fiasco from the early 1990s shows that even a cancelled program can be resurrected if Ottawa so chooses. Only time will tell if Trudeau will actually terminate the F-35 effort and start anew. It wouldn’t be the first time Ottawa has changed course.