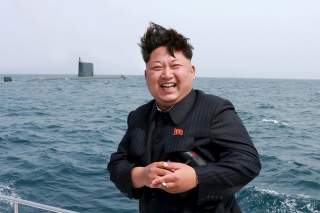 As Washington, Seoul and Tokyo fret about North Korea’s repeated firing of ballistic missiles into the skies of Northeast Asia, another part of Pyongyang’s arsenal has gone largely unnoticed because it’s under the ocean: Submarines.

Of course, submarines aren’t supposed to be noticed, which is what can make them such an effective stealth weapon.

North Korea does possesses a substantial underwater force, according to Terence Roehrig, professor of national security affairs and director of the Asia-Pacific Studies Group at the US Naval War College.

“By last count, they have 73 submarines which makes it one of the largest submarine fleets in the world,” said Roehrig via email.

However, the fleet comprises either diesel-electric mini-subs capable only of coastal patrols or aging Soviet-era submarines. North Korea appears to have one Sinpo-class submarine that is being developed as a ballistic missile platform, said Roehrig.

“North Korea has a long way to before not only developing a ballistic missile submarine and the submarine launched ballistic missiles to go with it, but also the ability/expertise to conduct a deterrence patrol with one of these assets,” said Roehrig.

The vessels are also noisy and easy to track so it’s not clear how capable North Korean submarines are at operating far from their shore, said Roehrig.

Nevertheless, Pyongyang’s goal is to have an effective, secure second strike capability and ballistic submarines add an important element for that, he added. North Korea’s ongoing work on submarines, SLBMs as well as the requisite submarine port facilities is quite visible.

One development that may be of importance relative to North Korea’s submarine fleet is a recent move by China to update its 1984 Maritime Traffic Safety Law.

This suggests China is preparing to exercise its authority and control over a vastly expanded offshore zone. Doing so could lead to more confrontations at sea with the US and its allies in the region.

“As a sovereign State and the biggest coastal State in, for example, the South China Sea, China is entitled to adjust its maritime laws as needed, which will also promote peace and stable development in the waters,” said Wang Xiaopeng, a maritime border expert at the Chinese Academy of Social Sciences, in China’s Global Times.

This raises two scenarios from the North Korean point of view: First, Pyongyang might see this expanded zone as a quasi-sanctuary and thus deploy its submarines there knowing that Chinese vessels and aircraft will provide a screen to restrict the access of US and allied anti-submarine surface ships and aircraft in the process.

Second, China will impose these same rules on North Korean submarines, effectively restricting their operations. Though this involves other complications.

“To agree that China has the right to control this maritime space as suggested to control North Korean activities in the East and South China Seas would undercut the position that these are international waters,” said Roehrig.

“The one exception might be if the operations of a North Korean ballistic missile submarine would fall under any of the prohibitions contained in UN Security Council resolutions. Then, restricting North Korean operations could be included under that authority and not one that provides China with an argument to rewrite maritime laws.”

A broader regional discussion about submarines in general is now underway.

This was based on a projected expansion of the region’s collective submarine fleet to a total of 250 subs by 2030.

The Code for Unplanned Encounters at Sea — established in 2014 — is the primary focus of Lai’s proposal which seeks revisions to the Code in order to reduce the possibility of accidents at sea involving submarines, and any subsequent flare ups resulting from such an accident.

This does open a door for discussion on how China will accommodate and tolerate North Korean submarines on patrol beneath the seas where China says it exercises control.

Clearly, a frank exchange about North Korean ballistic missile submarines and where they are operating is overdue and unavoidable.

Yet another issue is command and control issues that face North Korean leader Kim Jong-un.

To send a submarine to the East or South China Sea will tax the regime’s ability to maintain communication with the boat,” said Roehrig, who wondered if the regime is sufficiently confident that a North Korean submarine commander might not defect.