Will Hamas Accept a Ceasefire? 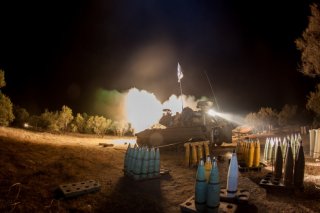 Nearly 800 Palestinian killed; 36 Israelis (the vast majority soldiers) lost in the line of fire; an estimated 150,000 Palestinian civilians in the Gaza Strip scurrying to safer places in order to protect themselves and their families from the fighting; hundreds of homes and buildings destroyed in strikes from the Israeli air force.  Operation Protective Edge, the code name for Israel’s latest military operation against Hamas militants in the sealed-off enclave, is now in its second week of combat.

As of July 24, those are the raw numbers—a set of disturbing figures that will continue to go up if Israeli and Palestinian factions are unable to arrive at an arrangement that would calm the waters, stop the rockets from flying, and cease the pounding that has pummeled Gaza’s already terrible infrastructure for the past two and a half weeks.

After nineteen months in the job, Secretary of State John Kerry has guaranteed himself the label of the planet’s most famous, recognizable, and tireless negotiator.  The discussions over Iran’s nuclear and uranium enrichment programs, Syria’s chemical weapons arsenal, Ukraine’s war against pro-Russian separatists, and the attempt to arrive at an Israeli-Palestinian peace agreement, however different they may appear, have one thing in common: Kerry is the middle of all of them.  The flare-up in violence between Hamas and Israel, however, has stretched Secretary Kerry and the Obama administration’s national security team to a breaking point.  Right now, getting the quiet restored along the Gaza-Israel border—and saving countless Israeli and Palestinian lives in the process—is a foreign policy priority at the very top of the administration’s “to-do” list.

John Kerry and his State Department team have been camped in the region since July 21 and are doing as much as they can to send home the message to Israel and Hamas that a cessation of hostilities is in both of their best interests.  John McCain, Lindsey Graham, Elliot Abrams, and the folks at the American Enterprise Institute may like to remind him of his failures over the past year and a half as America’s top diplomat, but what the critics cannot do is call Kerry passé or lazy.  Indeed, just as he sought earlier in the year to create and push forth a two-state framework that both Israel and the Palestinian Authority could accept (with reservations), Kerry is again choosing to sacrifice more of his diplomatic capital on the Israel/Palestine portfolio.  The only difference this time is that his efforts today are far more immediate and could be the difference between life and death for the tens of thousands of civilians in the middle of the conflict through no fault of their own.

The United States, of course, is not the only powerbroker in these ceasefire discussions.  Qatar, Turkey, the Palestinian Authority, Egypt, the Arab League, and the European Union are all involved and each party is talking with the other for precisely the same objective: a full and immediate stop to the violence.  Qatar and Turkey, two countries that have the best relations with the Muslim Brotherhood to which Hamas is technically a part, will be crucial in getting Khaled Meshal to sign on any dotted line.  The U.S. and Europe will serve the same function for the Israelis.  The Arab League, the United Nations, and Egypt are important as well: for any ceasefire to stick, it will be vital for all three of these actors to endorse the accord in full and provide guarantees that longer-term issues—a loosening of Israeli restrictions in Gaza, demilitarization of the territory, the opening of the Gaza’s borders, post-war economic reconstruction, international investment, political reform, etc.—are addressed to the fullest extent possible.

It reports are accurate that Secretary Kerry has drafted a new ceasefire proposal, the war that has filled the world’s television screens and newspapers for the past two and a half weeks is now at its most dramatic point.  An acceptance to the proposal could pave the way for a difficult but much needed discussion on the grievances that have driven Gaza into war three times over the past five years.  A rejection by Hamas, on the other hand, could persuade Israeli Prime Minister Benjamin Netanyahu and his security cabinet that expanding the Gaza ground operation, deploying more troops into the field, and setting more ambitious goals for the campaign is the only way to deal Hamas a heavy blow over the long-term.

The onus is on Hamas.  John Kerry and the rest of the international community hopes that the group will wise up and make the right decision.