Will Iran's New Parliament Be Better for Rouhani? 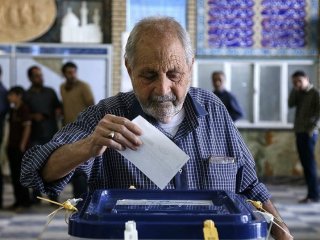 Iranian president Hassan Rouhani is hoping results from Iran’s second round of parliamentary elections on April 29 produce a better political landscape as he looks toward his re-election campaign a year from now.

He needs the good news. The more conservative outgoing parliament pointedly made his life more difficult in this month’s battles over the current budget. That was on top of managing the expectations of the slow-motion impact of sanctions relief from the JCPOA, as well as pressure from reformers who think he is not going far enough. Will the results, as Rouhani claims, enable his administration “to act on the promises it has made to the people?”

That remains to be seen. The elections appear to have given the Rouhani-aligned moderates and reformists a plurality in the new parliament, though they will likely be shy of an actual majority. This is still something of a victory for the president and his allies, such as former president Ali Akbar Hashemi Rafsanjani, considering how few actual reformist candidates were allowed to run in the first place. The results mean, though, that Rouhani will still be restrained as he attempts to get the Islamic Republic’s financial house in order.

First, there are the frustrations with JCPOA implementation. Rouhani and his administration certainly know that the challenge of convincing international banks and firms to conduct business in Iran is mostly of Iran’s own creation. The Iranian negotiators were aware that US sanctions on Iran for support for terrorism and human rights violations would remain. Some German banks report that even though Iranian banks are connected up to SWIFT; the US restrictions on dollar-clearing transactions still make it very difficult for Iran to move money through the system. Rouhani’s own team has also acknowledged the difficulties with bringing the Islamic Republic’s banking practices up to international anticorruption and transparency standards.

Another major burden parliament left Rouhani is unresolved subsidy reforms, essential for any of his economic restructuring. To be fair, this particular headache was bestowed by his predecessor. The Islamic Republic had indirectly subsidized the prices for fuel and many basic food stuffs for years, creating significant economic distortions. Populist-minded former President Mahmoud Ahmadinejad attempted to fix the problem in 2010 by switching the program to simply giving cash to every Iranian household, with the expectation those payments would be reduced over time. That was a time of high oil prices, however, and by Rouhani’s administration the subsidies were crippling the budget. On May 1, the Guardian Council rejected parliament’s budget, objecting to some aspects of subsidy allocation among other issues. Parliament is set to re-review the budget on May 8.

As anyone who deals with entitlement reform knows, reducing direct benefit payments is politically radioactive no matter the financial logic. The government’s first attempt—persuading upper-income households to voluntarily give up their payments—failed as badly as one would expect. A more modest proposal at reducing benefits in this year’s budget was met with a clever retaliatory move by parliament: eliminating the payments for the upper 30 percent of households (nearly twenty-four million individuals) or those making over $990 a month. Rouhani’s opponents could be seen simultaneously as being more fiscally responsible than the president while sticking it to his electoral base of wealthy and upper-middle-class families.

Vice President and key Rouhani economic advisor Mohammad Bagher Nobakht railed against the decision, noting that a monthly income of $990 does not suffice for many Iranians facing everyday demands, including “renting a house” or “educating children.”

Another blow to Rouhani’s agenda came from the parliament’s final defense budget for this year. Rouhani had originally proposed a budget that specifically slashed the Islamic Revolutionary Guards Corps (IRGC) budget by almost 20 percent. Rouhani may have been trying to balance the budget and enact his reforms partly by expecting the IRGC would be reaping increased postsanctions income from their business empires, which control about a quarter of the Iranian economy. The conservative and hardliner dominated parliament rejected Rouhani’s defense plans, though, whatever his reasoning. The body passed a budget increasing IRGC funding by nearly 16 percent and raising official defense spending to $6.8 billion (this does not include other off-the-books funding streams which support the IRGC).

This final slap to Rouhani sets up decisions with major implications for the security concerns of the United States and its allies. The new parliament will likely approve the Islamic Republic’s next Five Year Development Plan. The document will shape Iran’s upcoming economic and security investment, focusing heavily on science and technology, cyberwarfare, and improving the state’s defensive capabilities against subversion, economic coercion, and military threats. Rouhani’s vision has been to strengthen Iran more through economic development and international investment over force projection and internal security. The IRGC and hardliners (and Supreme Leader Ayatollah Ali Khamenei’s) vision has been more on self-sufficiency and military deterrence. The new budget keeps the country on the latter path, raising the risk of rapidly modernizing Iranian conventional and cyber force in the coming years.

The irony is that these machinations from the outgoing parliament may be a blessing in disguise for Rouhani, even if they dishearten his electoral base. The harsh subsidy cuts may give the government some fiscal breathing room and the increased defense spending may help deflect pressure on his reform agenda from conservatives and the IRGC.

What should Washington do to help as the new parliament sits? The idea that the United States is not living up to the spirit of the JCPOA—Khamenei, for example, says the United States is only implementing the deal on paper—is becoming a convenient narrative for pressing Washington for greater concessions. Conciliatory moves by the United States to shore up the “moderates” in the short term may only allow the incoming parliament to delay the most critical fiscal reforms in the long-term. Overtly encouraging Rouhani’s policies risks branding his goals as serving U.S. interests, making him toxic within the Islamic Republic’s power structure.

As Rouhani wages an uphill battle against Iran’s entrenched corruption and financial dysfunction, the best option for the United States may be to do nothing.

Image: A man votes in Ahvaz in the second round of elections for Iran’s Majles. Tasnim News photo by Morteza Jaberian, CC BY 4.0.