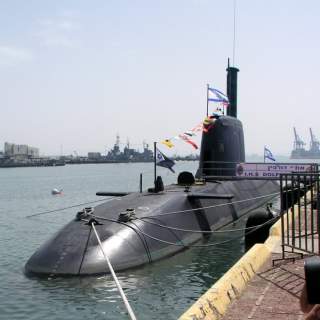 The first of Israel’s new super advanced submarines is about to enter service, according to local news reports.

In recent days, a number of Israeli and other news sources have said that the INS Tanin is nearing the end of its testing, and will soon enter service with the Israeli navy. The Tanin first arrived in Israel from Germany in September of last year. It is the first of three new Dolphin submarines that Tel Aviv is purchasing from Germany.

“Israeli Navy personnel – together with crews from the defense industry – are executing the final sets of tests of the advanced weapons, communications, and intelligence systems added to the sub after its arrival from Germany in September,” YNet news outlet reported last week.

Compared to the three conventional Dolphin submarines Israel already operates, the INS Tanin and its two sister ships hold a number of advantages.

To begin with, the new ships are much larger. Whereas Israel’s existing submarines are just 57 meters (187 feet) long, the new Dolphins measure in at 68 meters (223 feet) in length. This should allow them to carry more torpedoes and missiles.

Most notably, the Tanin and its sister ships are powered by an air-independent propulsion (AIP) system, compared to the Jewish state’s existing submarines, which are conventionally powered. AIP systems allow submarines to operate much longer and in near silence. This should provide Israel with a critical advantage.

As David Salamah, the commander of the Haifa naval base, told Israeli news outlets, the country’s undersea fleet, “operates deep in enemy territory — secretly, efficiently, and lethally.” In this regard, Salamah noted, the AIP Dolphins will be a huge asset. "We are talking about a major upgrade to the navy and the entire IDF, in the face of the challenges posed to the State of Israel.”

Another anonymous Israeli naval officer was even more explicit, stating that the new AIP Dolphins have “extended by several days our ability to operate silently and secretly in enemy territory."

The most critical mission for the new submarines will be to serve as the most survivable leg of the country’s nuclear weapons arsenal. Although cloaked in typically vague language because of military press censorship in Israel and the fact that the country doesn’t admit to having nuclear weapons, YNet reported:

According to foreign reports, the newest set of submarines is the strategic arm of the Israeli military, the country's "second strike" force, meant to retaliate against aggressors in the worst case scenario of a nuclear attack.

The technical crews and engineers have been working overtime to assure all systems are synchronized and operating flawlessly on the IDF's most expensive, and secretive, weapon – with a price tag estimated at half a billion dollars.

The three new AIP Dolphins are built by Germany's Howaldtswerke-Deutsche Werft (HDW). According to Nuclear Threat Initiative, they are being sold to Israel for $1.8 billion, with the German government covering a third of that cost.

The second of the new submarines, INS Rahav, is expected to arrive in Israel sometime later this year, with the third and final one coming sometime in 2018 or 2019.