Will it Take a Calamity for the Navy to fix its Obsolete Helicopter Training Program? 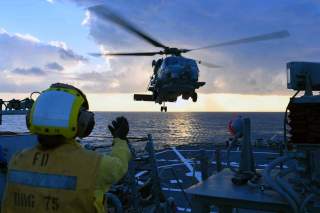 The Navy’s program to train helicopter pilots stands on the precipice of a major technical or human calamity. Because it is operating obsolescent, 35-year-old TH-57 helicopters that are increasingly difficult to maintain, it is only a matter of time before there is a major incident that brings this critical training operation to a standstill. The Navy has been planning to replace this dwindling fleet of helicopters since 2005. It is now 2017 and the Navy is no closer to finding a solution. It is time for a new approach, one that leverages best practices from the commercial world of aircraft fleet management.

Helicopter training for Navy, Marine Corps and Coast Guard personnel is the responsibility of the Chief of Naval Air Training (CNATRA). The man in charge, Rear Admiral Dell D. Bull, has an impossible task. He must take nascent pilots coming off initial training on the modern T-6 trainer aircraft, and then send them back to the future by putting them into a 35-year-old helicopter without up-to-date avionics, safety features or electronic systems in order to prepare them for flying some of the most advanced aircraft in the world, such as the MH-60R, CH-53 and MV-22 Osprey. The Navy is in danger of creating a future in which it has the best operational fleet of helicopters and tiltrotor platforms, but an inadequate supply of fully trained pilots to fly them.

Moreover, the TH-57, a derivative of the Bell 206, is no longer in production. If a helicopter is junked, there is no way to acquire a replacement. This means CNATRA must pay increasingly exorbitant amounts of money to keep the old birds flying. The current maintenance contractor, L-3 Communications, has performed a herculean task keeping these old crates flying. But maintenance demands are cutting into the number of aircraft available on a daily basis. As a result, there are reports that the number of daily training flights is declining below demand, creating a throughput problem that will soon affect the readiness of both the Navy and Marine Corps.

A lack of imagination from its acquisition community has contributed greatly to the Navy’s inability to fix its helicopter training program. Navy acquisition sees the problem as one of buying and maintaining helicopters. So it immediately goes ballistic worrying about the money required to buy a new fleet of training helicopters. Wrong way to think about the problem. CNATRA’s job is producing qualified, capable pilots in sufficient numbers to meet demands. Ownership of equipment is largely irrelevant so long as all the requirements for training are met. Even today, maintenance and support for aircraft, simulators and other equipment is performed by private contractors. On an average day, only the instructor pilot and the trainees are actually Navy personnel. Why, in such an environment, should it matter who owns the helicopters so long as a sufficient number are available on a daily basis to meet demand?

How would a private company reluctant to pay the upfront costs to acquire capital goods handle this problem? It would outsource the job. It would contract with a services provider who would acquire and maintain the necessary fleet of helicopters, simulators and support capabilities to guarantee the required number of training flights per day. The beauty of this is that the contractor would own the aircraft, be responsible for their upkeep and modernization and ensure the smooth flow of trainee pilots through the system.

This is exactly what the Army and Air Force have done. The Army awarded CAE USA a multiyear contract to provide a turnkey comprehensive training program for fixed-wing pilots. The work will be performed at a company-owned and operated training center and academic, simulator, with live flying training on both U.S. Army and CAE-owned aircraft. Similarly, Doss Aviation is responsible for the Air Force’s Initial Flight Training program. This service is provided at the company’s owned and operated facility in Pueblo, Colorado using platforms, curriculum and instructors it provides. The Army and Air Force programs prove that there is no legal, regulatory or contracting barrier to hiring a services contractor to support Navy helicopter pilot training.

The Navy should hold a full and open competition to provide a complete system for training Navy helicopter pilots. The contractor would provide a fleet of appropriate and modern helicopters, simulators, maintenance and support, even curriculum development and classroom instruction, if the Navy so desires. One contract, one contractor; what could be more straightforward and simple to administer? The contractor would get paid based on an agreed level of performance, generally defined as training opportunities. Based on the number of training flights the Navy requires per day, the contractor would ensure that number of aircraft are available. The Navy gets out of ownership of yet another fleet of helicopters as well as the headache of maintaining and upgrading them. The Navy can still control the training curriculum, the number and character of training flights and use its own personnel as trainers. But it gets rid of the costly and burdensome responsibilities for managing the equipment and training systems that support CNATRA’s mission.

Another risk the Navy faces due to its failure to innovate is that when the crisis hits, and it will, the Pentagon will simply shut down the separate Navy program and ship all the responsibility and resources to the Army’s helicopter training program at Fort Rucker. The new Secretary of Defense is already looking to consolidate areas of overlapping activity among the services. Turning Navy/Marine Corps helicopter pilot training over to the Army creates certain challenges given that each service operates differently, but this would still be a better solution than trying to maintain the Navy’s current creaky, inefficient and even dangerous system.