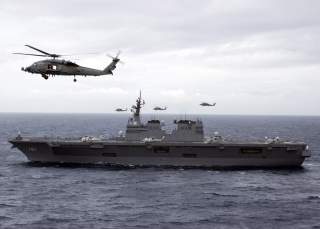 Japan is eyeing a return to the aircraft carrier business, according to a report from Reuters.

This week, Reuters reported, citing three unnamed government officials, that Japan is actively considering refitting its massive Izumo-class helicopter destroyers to carry American stealth fighters. Specifically, the Izumo-class destroyers—of which Japan has two ships—would be able to carry the F-35B, which has a short take-off and vertical landing capability. Other newspapers have since confirmed the report, citing their own sources within the Japanese government.

Following the Reuters report, Japanese Defense Minister Itsunori Onodera issued something of a denial, although hardly a full-throated one. "Regarding our defense posture, we are constantly conducting various examinations. But no concrete examination is under way on the introduction of F-35B or remodeling of Izumo-class destroyers," Onodera said, local media reported. He added, however, that “there is a need to always be considering various alternatives."

This lukewarm denial notwithstanding, the notion of Japan transforming one or both of the ships into an aircraft carrier is hardly outlandish. As the Reuters article notes, they were built with a hanger that can handle aircraft. And, when the first ship was unveiled in 2013, many observers called it an “aircraft carrier in disguise.” It is not difficult to see why. The ship is roughly 250 meters (820 feet) long and displaces 24,000 tons. As I noted back in 2013, the helicopter “destroyers” are "about 50 percent bigger (in terms of displacement) than Japan’s current largest ship, the Hyuga-class helicopter destroyer." Others have pointed out that the ships are actually larger than Spain and Italy’s short take-off and vertical landing (STOVL) aircraft carriers.

According to the sources who spoke to Reuters, the refitting would include “adding a curved ramp at the end of the flight deck, improving the deck's heat resistance against jet burners, and reinforcing the ship's air traffic control capability." That is similar to what experts predicted would be necessary when the first vessel was commissioned. For instance, writing for the Center for International Maritime Security (CIMSEC) in 2016, Matthew Gamble noted that “the potential for operating STOVL aircraft from these vessels is high.” To handle the F-35, for instance, Gamble wrote that the vessel would need Thermion coating to protect it from the extreme heat of the F-35's exhaust. He went on to say that it would most likely also need a ski-jump to help with take-offs.

Before making changes to the ships, however, Japan would first need to purchase the aircraft. Tokyo is already a partner in the Joint Strike Fighter program, having announced plans to procure forty-two F-35s in late 2011. All of these planes will be the F-35A variant that does not have a STOVL capability. There have also been reports in recent months that Tokyo was considering buying more F-35s. In fact, Rep. Ted Yoho (R-FL) told The Washington Examiner in September that there was a letter of intent in place for Tokyo to purchase more F-35s, but did not say how many or what kind. It is possible the letter of intent is for F-35Bs.

The move to fly stealth aircraft from the Izumo helicopter “destroyers” will almost certainly alarm China and possibly other countries in the region. At the time of the Pearl Harbor attacks, Imperial Japan had more aircraft carriers than any country in the world and as well as superb pilots. All of Tokyo’s carriers—except for one—were sunk before the war was over, and postwar Japan has eschewed aircraft carriers as part of its pacifist constitution.

Thus, the mammoth size of the Izumo-class helicopter destroyers immediately sparked alarm in some circles. When the first vessel was launched, it received extensive attention in Chinese state-run media, with China’s Defense Ministry warning: “We are concerned over Japan's constant expansion of its military equipment. Japan's Asian neighbors and the international community need to be highly vigilant about this trend. Japan should learn from history, adhere to its policy of self-defense and abide by its promise to take the road of peaceful development.” Not surprisingly, Chinese officials were quick to warn Japan against refitting the Izumo-class destroyers to carry F-35Bs, with one Chinese Foreign Ministry spokesperson suggesting such a move would violate Japan’s pacifist constitution.

Of course, it is China’s own expanding military power—including building a number of aircraft carriers—that is leading Tokyo to reconsider its defense capabilities. According to the Japanese newspaper Asahi Shimbun, Japanese defense officials believe the refitted Izumo-class destroyers are necessary to defend "outlying islands, such as the disputed Senkaku Islands in the East China Sea." Reuters said that refitting the Izumo-class destroyers would be “aimed at preparing for a scenario in which runways in Japan had been destroyed by missile attacks,” a scenario that I’ve discussed before.

In this sense, the Asahi Shimbun article noted that some officials in the Japanese Defense Ministry are referring to the refitted vessels as “defensive” aircraft carriers and thus not in violation of the constitution. The same report said that a decision on whether to proceed with the refit is expected some time in the middle of 2018.