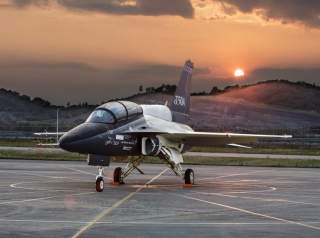 Lockheed Martin is offering its T-50A jet trainer—which was co-developed with South Korea—for the U.S. Air Force’s T-X Advanced Pilot Training program. In preparation for the forthcoming contest, the first of two T-50A prototypes made its first flight on June 2, 2016, in Sacheon, South Korea, with company test pilot Mark Ward at the controls.

“The T-50A is a block upgrade to uniquely tailor that to the U.S Air Force requirements,” Griswold said. “So we’ve taken the basic T-50, we’ve put the fifth-gen cockpit in it similar to the F-35, we’ve added an embedded training system to give it simulated weapons and sensors that are consistent with the requirements for USAF training and we have added an aerial refueling capability.”

Being ultimately derived from the F-16’s technology, the T-50A would bring fighter-level performance to the T-X competition. The Air Force has a threshold requirement for an aircraft that can sustain 6.5G and 20 degrees angle of attack (AOA) with an objective requirement for a jet that can sustain 7.5G and 25 degrees AOA. The T-50A comfortably meets the objective performance requirements for the T-X competition, Griswold said. Indeed, the T-50 is rated for 8G—and as a bonus—can reach speeds of Mach 1.5 even though the Air Force does not require supersonic performance.

The T-50A incorporates the Air Force’s requirement for a simulated radar, a simulated datalink and a real datalink. However, Griswold couldn’t say for competitive reasons if the aircraft will include a simulated targeting pod. But Griswold did say that the avionics suite onboard the T-50A were closely modelled on the company’s F-35 Joint Strike Fighter—which is set to become the dominant fighter in the Air Force fleet. “You’d have to be an expert to tell the difference,” Griswold said. “We did it that way on purpose.”

Lockheed hopes to have flown the first T-50A prototype to the United States before the year is out. As well, the company also hopes to have its T-50A assembly plant in Greenville, South Carolina, ready to go before the end of 2016. While major T-50A structural components would still be built in Korea, the aircraft would be assembled in United States should Lockheed win the contract. Moreover, most of the jets’ avionics and subcomponents—including its 17,700lbs thrust General Electric F404 afterburning turbofan—are domestically sourced products, Griswold said. Indeed, almost all of the technology onboard the aircraft ultimately originates in the United States. “We’re doing everything we can now to be ready so that if we do win the contract, we’ll be ready to start operations there in Greenville literally on Day One of the contract,” Griswold said. “We think we have the lowest risk aircraft today because of our operational experience.”

The Air Force expects to formally release a request for proposals for the T-X this December and make an award one year later in 2017. In addition to Lockheed Martin, Raytheon, Northrop Grumman and Boeing are all competing to fill the 350 aircraft T-X requirement. There is also the expectation that the winning contractor will secure a potential bounty of follow orders from not only the U.S. Air Force, but air forces around the world that will fly the F-35 stealth fighter. “There is a lot of pent up demand around the world for new trainers,” Griswold said. “Everyone is just waiting to see what the U.S. Air Force does.”

Indeed—as the U.S. Air Force requires—the T-50 has considerable margin for growth to include the ability to add new avionics, radar and weapons hardpoints. The Air Force has anticipated that there might be a future need to replace its Northrop Grumman B-2 Spirit and Lockheed Martin F-22 Raptor T-38 companion trainers or to replace its fleet of test and aggressor aircraft. “There is a variant of the T-50 that the Korean Air Force also flies called the F/A-50, which is a light attack version,” Griswold said. “So we designed from the onset for all of those capabilities to give it that fighter-level performance and that will become potentially important in the future.”