Will This New Gun Turn China's Soldiers into Super Killers? 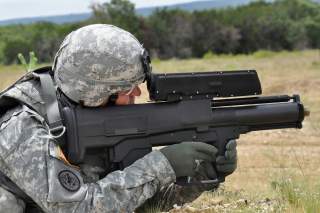 Be wary of such claims. The U.S. version of this weapon from years ago, the OICW, also included a 20-millimeter grenade launcher but the U.S. military found it to be ineffective. A grenade’s lethality primarily comes from shrapnel, but the pieces of flying metal were often too light and often dispersed upwards and away from the target. Ultimately, the U.S. military lost interest, though the OICW did inspire the M320 grenade launcher and the problematic — and now cancelled — XM25 (pictured above).