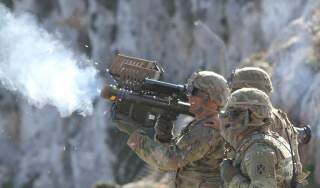 The leadership of the U.S. Army has locked arms and is advancing like the proverbial phalanx on a single objective: to make that service’s acquisition system faster and more effective. Rather than take the usual incremental approach to change, they are going big and bold. Even if only a partial success, the reform effort should produce an Army acquisition system that is speedier, more agile, less costly and more likely to produce better outcomes.

As described by Army Secretary Mark Esper in recent testimony before the Senate Armed Services Committee, the reform effort consists of five interrelated initiatives: establishing a Futures Command; streamlining and improving ongoing acquisition activities such as contracting, sustainment and testing; creating cross functional teams (CFTs) focused on rapidly defining requirements for programs that address the Army’s six modernization priorities; refocusing science and technology priorities and investment; and changing oversight and decision making related to major acquisition programs. The Army hopes that just by using CFTs it can reduce the time needed to develop requirements from 60 or more months to 12 or less. The overall goal, according to Secretary Esper, is to shorten the acquisition cycle to between 5 and 7 years.

But how fast can any acquisition system go when asked to come up with cutting edge capabilities that can operate in any environment, survive combat and last for decades? The history of Army programs shows wide variation in acquisition timelines. A review of successful major acquisition programs over the past half century suggests that they take a minimum of a decade, but more often 15-20 years, to go from concept development to initial operating capability (IOC).

The effort to develop the Abrams main battle tank actually began with the American-German MBT-70 program in the early 1960s. When this collaboration foundered, the Army renamed its effort the Abrams program in 1970 but exploited almost a decade of technology development. The first Abrams was produced in 1979 and IOC was achieved the next year. Total time: 17 years.

The Bradley vehicle began as the MICV-70 program, also a collaboration with Germany in the mid-1960s. A combination of factors including the end of the international program and dissatisfaction with the initial set of prototypes led to the issuance of a new request for proposals in 1972 and an award for what became the Bradley in 1973. Production was approved in 1979 and the vehicle entered service in 1981. Total time: 18 years.

The roots of the AH-64 Apache attack helicopter can be traced back to the AH-56 Cheyenne attack helicopter development program in the early 1960s. This program was cancelled in 1972 and new development contracts awarded in 1973 for what became the Apache. The first helicopter was deployed in 1982 and IOC declared shortly thereafter. Total time: 20 years.

The Patriot surface-to-air missile system began life in 1964 as the SAM-D air defense system. It was renamed Patriot in 1976. Production of Patriot began in 1981 and IOC was achieved in 1984. Total time: 20 years.

The acquisition timeline for the Black Hawk utility helicopter was unique among the Big Five. The program began in 1970. The Sikorsky UH-60 was selected in 1972 after a competitive fly off. Production started in 1978 and the aircraft entered service in 1979. Total time: 10 years.

There have been other successful major acquisition systems with timelines similar to that of the Black Hawk. The M270 Multiple Launch Rocket System (MLRS) began life as the General Support Rocket System (GSRS) program in the mid-1970s. In May 1980, following a five-year competitive development effort, a contract was awarded to Vought Corporation. MLRS achieved its initial operational capability with the U.S. Army in 1984. Total time: 10 years

The Warfighter Information Network-Tactical (WIN-T) began in 2002 for the purpose of providing on-the-move communications to units in the field. An interim capability, the Joint Network Node, was initiated in 2004 and folded into WIN-T as Increment 1 in 2007. Increment 2, which provided the desired on-the-move capability, began fielding in 2013. Of course, now that the Army is halting procurement of Increment 2 and is starting over, one must add a decade or more to the timeline for achieving on-the-move communications. Total time: 11 years for WIN-T Increment 2; for the follow-on system, who knows.

The Future Vertical Lift (FVL) program, with its emphasis on technology maturation and the fielding of prototypes, is often cited by Army leaders as an example of how to do acquisition right. FVL began in 2009 as an initiative to develop relevant technologies. A precursor program, the Joint Multi-Role (JMR) helicopter, began in 2011 for the purpose of informing FVL requirements by developing and flying demonstrator aircraft. However, the two JMR contractors, Sikorsky and Bell, were working on relevant technologies before the FVL program began. The current acquisition plan is to select an FVL contractor in 2024 and begin production in 2030. There is a growing belief that this timeline could be compressed by as much as five years. Total time: officially, 20 plus years; optimistically, 15.

The proposed acquisition reforms are intended to eliminate the false starts and bets on immature technologies that marred a number of Army acquisition programs. But in many cases these errors allowed technologies to mature and requirements to be refined. Prior programs could have been executed more efficiently but not necessarily much faster. The reality is that fielding next generation capabilities inevitably takes a lot of time. The Army has been working on most of its modernization priorities for at least a decade. Even with the use of CFTs and implementation of the other reforms it is unlikely that new capabilities will be fielded in less than another decade.