Will Raytheon's SkyCeptor Save Poland from Russia's Mighty Missiles? 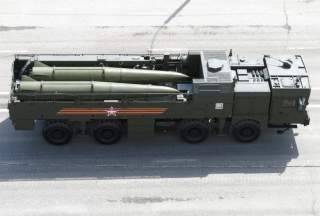 Raytheon is offering to co-develop a new interceptor missile with Poland that would be designed to defeat incoming short and medium range ballistic and cruise missiles.

The weapon—called the SkyCeptor—which would use hit-to-kill technology, could also be used against other air defense threats such as aircraft and would be integrated into the Patriot missile defense system. Warsaw is set to request a sale of the Patriot missile defense system from the United States to counter the threat from neighboring Russia. Moscow regularly rotates 9K720 Iskander-M—also know as the SS-26 Stone—short-range ballistic missile into its Kaliningrad exclave, which borders Eastern European nation.

“Today I have made a decision about the dispatch of a letter of request to the United States Government and the Raytheon company concerning the order of the Patriot missile defense system,” Polish defence minister Antoni Macierewicz told Radio Poland.

According to Raytheon, Warsaw also wants a low-cost interceptor for the Patriot. “We’ve listened to our allies in Poland, and we’re doing everything we can to meet their needs,” said Dr. Mitch Stevison, vice president of Raytheon’s Air and Missile Defense Systems, in a statement. “SkyCeptor will give Polish air defenders a hit-to-kill capability at a fraction of the cost of current options.”

“We’re redefining the price tag on what are traditionally very expensive missile defense capabilities,” said John Baird, vice president of Raytheon’s Poland programs, in a statement.  “SkyCeptor gives Poland a much more cost-effective option to take out the threat.”

According to Macierewicz—as cited by Radio Poland—Warsaw is interested in purchasing eight Patriot batteries. Two of the batteries will be delivered by 2019—assuming Washington approves the sale. The remaining weapons would be delivered after 2020.

However, the Polish missile batteries would be significantly more capable than the existing U.S. Army Patriot systems. Warsaw wants a 360-degree radar coverage capability—which the Patriot currently does not have and will not have for some time to come. Thus, if Poland were to order a customized system separate from the U.S. Army’s Patriot upgrade program, Warsaw could be facing a significant bill for the integration of a new radar and other upgraded systems.

Missile defenses, however, are expensive in the best of times. Often, the defender is placed in the unenviable position of launching interceptor missiles that cost many times as much as an incoming weapon such as a Scud. Integration of the SkyCeptor into the Patriot system might serve to break the cost curve to some degree.

“Missile defense is a complicated challenge because it’s cheap and easy to create threats, but difficult and expensive to defend against them,” said Ralph Acaba, vice president of Raytheon Integrated Air and Missile Defense, in a statement. “Missile defense systems need to become more cost-effective, and integration of SkyCeptor into Poland's Patriot is a step in the right direction.”