Will Russia Nuke ISIS in Syria? 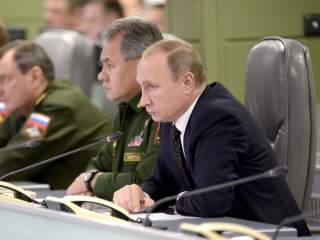 Russian president Vladimir Putin seemed to raise the possibility this week that Moscow might consider using nuclear weapons to combat Daesh terrorists in Syria. But Putin quickly added that he hopes such weapons will never be used and are not needed for use against terrorists.

“We must analyze everything happening on the battlefield, how the weapons operate. The Kalibrs and KH-101 have proved to be modern and highly effective, and now we know it for sure—precision weapons that can be equipped with both conventional and special warheads, which are nuclear,” Putin said during a meeting with Defense Minister Sergey Shoigu, according to Russian television. “Naturally, this is not necessary when fighting terrorists and, I hope, will never be needed.”

Russian military forces have been demonstrating their ability to hit targets at long ranges using cruise missile strikes launched from Tupolev Tu-160 Blackjack supersonic bombers, diesel-electric submarines and even tiny corvette-class ships in the Caspian Sea. Moscow has, in effect, been testing the Russian military’s ability to fight a thoroughly modern war during its campaign in Syria. Some of the latest Russian hardware—including the Su-30SM Flanker, Su-34 Fullback, S-400 missile defense system and the Tu-160 bomber—have made their debut during Moscow’s intervention in the Middle East.

However, Russian forces are still heavily reliant on their formidable nuclear arsenal, which was inherited from the Soviet Union. While Russia has made significant strides in improving its conventional forces since 2008, reforms are incomplete. Moscow still has a long way to go before it can field a completely modern force. As such, Russia has to rely on its nuclear forces to make up for its relative conventional weakness.

While the Soviet Union maintained an explicit “no first use” policy regarding nuclear weapons, Russia today reserves the right to use nuclear weapons first during a conflict. That new doctrine is paradoxically called ‘de-escalation.’ As former Soviet and Russian diplomat Nikolai Sokov, and current senior fellow at the Vienna Center for Disarmament and Non-Proliferation, writes in the Bulletin of the Atomic Scientists:

“If Russia were faced with a large-scale conventional attack that exceeded its capacity for defense, it might respond with a limited nuclear strike. To date, Russia has never publicly invoked the possibility of de-escalation in relation to any specific conflict. But Russia’s policy probably limited the West’s options for responding to the 2008 war in Georgia. And it is probably in the back of Western leaders’ minds today, dictating restraint as they formulate their responses to events in Ukraine.”

The Russian de-escalation doctrine is similar in some ways to the Cold War-era Nuclear Utilization Target Selection theory—with the apt acronym NUTS—which is a doctrine designed to win a limited nuclear war.

“During the Cold War, deterrence involved the threat of inflicting unacceptable damage on an enemy,” Sokov writes. “Russia’s de-escalation strategy provides instead for infliction of “tailored damage,” defined as “damage [that is] subjectively unacceptable to the opponent [and] exceeds the benefits the aggressor expects to gain as a result of the use of military force.”

As such, while Russia might seem more willing to use its nuclear weapons than Western powers, Moscow will likely not use nuclear weapons in Syria. As Putin said in his statement, it is not necessary and Russian forces are in no danger of being overwhelmed. Since 2010, Russia has limited its condition for the use of nuclear weapons to situations where “the very existence of the state is under threat.”