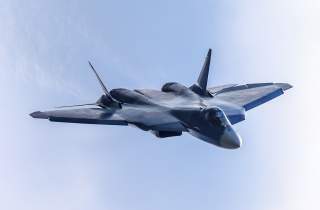 "This is actually a splendid plane and it can embrace both fifth-and sixth-generation features. It has huge modernization potential,” former Russian Aerospace Force commander and current chairman of Russia’s Federation Council Defense and Security Committee Viktor Bondarev told the TASS news agency. “Importantly, it is the best among the existing versions by its stealth characteristics. It incorporates all the best that is available in modern aviation science both in Russia and in the world."

The United States Air Force has already started to look at options for a next-generation successor to the Lockheed Martin F-22 Raptor that is called the Penetrating Counter Air (PCA). However, the U.S. Air Force is very carefully studying exactly what it needs before jumping into a formal program of record. Indeed, while its is likely that the PCA will be a new aircraft of some sort, the service had not committed to developing an entirely new jet fighter. It’s keeping its options open for what might be needed in the post-2030 era.

The U.S. Navy is also conducting an analysis of alternatives to examine exactly what the service needs for its Next Generation Air Dominance—sometime called the F/A-XX—program. Like the U.S. Air Force, the U.S. Navy is looking a broad spectrum of potential options to counter potential threats in the 2030s and beyond. The service has not committed to anything because it doesn’t yet know what capabilities it will need.

Thus, it is unclear how the Russians could have simply decided without any serious analysis exactly what kind of capabilities their air force will need in the far distant future. Certainly, there is very little basis to support the conclusion that the current Su-57 airframe would still be relevant in three decades time as a top-of-the-line air superiority fighter.

It’s likely that Bondarev, who is no longer a serving Russian military officer, was simply expressing his personal opinion. Russian sources indicated that power inside the country rests purely with the executive branch and comments from the legislative branch should not be taken seriously.