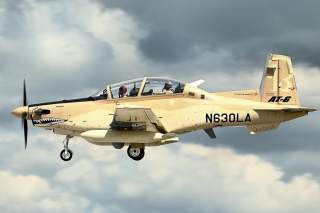 The United States Air Force (USAF) recently announced the next phase of its Light Attack Aircraft (OA-X) experiment. Two aircraft, the Textron AT-6 Wolverine and the Sierra Nevada A-29 Super Tucano will participate in another round of demonstrations between May and July as part of the experiment, which could lead to a decision to buy a new OA-X aircraft. However, the Air Force has made plans to buy an OA-X before, only to backtrack at the last minute. Is the Air Force serious about an OA-X purchase this time?

Air power analysts are divided. Some believe that the service sees value in an aircraft that would help train and season new pilots while simultaneously saving airframe life on expensive fourth and fifth generation fighters. Moreover, an OA-X would greatly save on operating costs for the Air Force. “Performing low threat CAS [close air support] with an OA-X type of aircraft offers advantages in the forms of much lower operating costs and the opportunity to reduce wear and tear on frontline aircraft,” retired Air Force Lt. Col. Michael Buck, notes in a recent Mitchell Institute paper. “For instance, the A-29 Super Tucano turboprop aircraft has an historical operating cost of $1,000 per hour, which is less than 1/20th that of the F-16 and 1/60th that of the F-22.”

Among those who believe the Air Force is sincere in its desire to purchase an OA-X is Mark Gunzinger, a former B-52 pilot and air power analyst at the Center for Strategic and Budgetary Assessments. “Yes, I think they are serious,” Gunzinger told The National Interest. “It makes sense for the missions they would use it for as well as from a cost and force management perspective.  There also appears to be significant support on the Hill, but a never-ending series of CRs [continuing resolutions] could disrupt its timing.... As well as other programs, for that matter.”

An aircraft like the OA-X could take the strain off fighters such as the A-10, F-16, F-15E and F-22, which have been pressed into service against insurgents in the Middle East. “It could help reduce the tempo for some capabilities in some operations,” Gunzinger said. “Light attack in support of CT [counter-terrorism] missions, for example, in permissive environments.”

Richard Aboulafia, vice president of the Teal Group aerospace consultancy, took a different view. “I suspect this is just messaging,” Aboulafia told The National Interest. “The idea of USAF pilots actually taking light turboprop attack aircraft into combat is kind of absurd, and somewhat dangerous.  There are no other developed world air services that use attack aircraft in this class, for the very good reason that the same missions can be accomplished more effectively and with much less risk to pilots using jets.”

That being said, the OA-X could find a niche as an aircraft that the United States supplies to partner air forces. “Of course many U.S. allies in the developing world need planes like these, so OA-X could serve to establish the leading choice there,” Aboulafia said. “But then again the Super Tucano staked out that position years ago.”

Time will tell if the Air Force is genuinely serious about the OA-X.