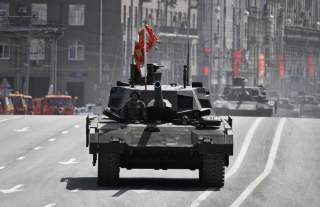 Uralvagonzavod is set to deliver the first batch of 100 operational T-14 Armata main battle tanks to the Russian Ground Forces between 2017 and 2018.

Russian industry officials had earlier indicated that the new tank was already in production—which came as a surprise to many observers who believed that the new armored fighting vehicle would not be ready for production until the early 2020s.

The Russians hope to reduce the cost of the new Armata family—which includes a host of war machines including an infantry-fighting vehicle—by buying large production blocks. Uralvagonzavod will also have to use new manufacturing techniques—such as 3D printing to help reduce production costs.

Halitov told the news agency that the cost of the new tanks “will definitely be adjusted downward.” He added that it would be possible to cut costs with “good batches of 100-150 pieces and streamlined production.”

The Russian army has taken delivery of twenty pre-production versions of the tank for operational testing—which is currently under way just outside Moscow at Kubinka. The first operational T-14 unit is likely to be stood up in Siberia with a unit that performed particularly well during the invasion of Crimea according to a source.

The Russian Ground Forces are expected to take delivery of operational Armatas starting in 2017. However, that might only apply to only the T-14 main battle tank variant. It’s not clear if other Armata variants are also in production.

The Armata Universal Combat Platform consists of the T-14 main battle tank, the T-15 heavy infantry fighting vehicle and the T-16 armored recovery vehicle, among a host of other vehicles.

Another member of the Armata family includes an upgunned heavy assault armored vehicle, which has been dubbed “the Tank Killer” by Russian media. The “Tank Killer” variant seems to incorporate a derivative of the 2S35 Koalitsiya-SV’s 152mm artillery piece into the Armata chassis in a direct fire mounting.

However, while the Moscow continues to make bold proclamations about its grand rearmament plans, it’s not clear how the Kremlin hopes to pay for this vast arsenal given Russia’s faltering economy. It remains to be seen if a division of operational Armata main battle tank emerges before 2020.