Will The U.S. Army Get Serious About Revolutionizing Long Range Fires? 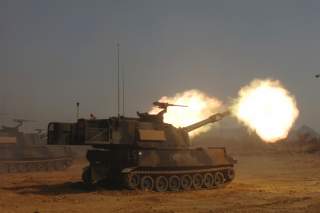 U.S. and North Atlantic Treaty Organization (NATO) forces face two particular challenges from the modernized Russian military in Europe. The first is an increasingly sophisticated air defense network consisting of large numbers of mobile high performance anti-aircraft missiles of varying ranges integrated through an array of radars, airborne surveillance aircraft and other sensor systems. Coupled with new generation air superiority fighters, the Russian air defense network in Europe casts an anti-air umbrella that is hundreds of miles deep, one that is capable of denying the West the ability to conduct effective air operations even over large portions of NATO airspace, the Baltic and Black Seas and the Western regions of Russia.

The second threat is posed by massed, long-range artillery, land and sea-launched cruise missiles and surface-to-surface rocket systems supported by an array of surveillance and targeting systems, including drones. Russian ballistic and cruise missiles can threaten targets at ranges of several hundred miles. According to Dr. Phillip Karber, a long-time observer of the Russian military:

The increased availability of overhead surveillance combined with massed area fires of artillery and the Multiple Launch Rocket System have produced a new level of intensity in modern conventional combat. Data from the Ukraine conflict show that artillery is producing approximately 80 percent of all casualties. Four trends have emerged that are important for U.S. ground forces: – Russia employs a combination of dual-purpose improved conventional munitions, scatterable mines, top-attack munitions and thermobaric warheads that have catastrophic consequences when used in preplanned, massed fire strikes.

The U.S. military has yet to figure out a strategy for countering these two challenges. The total responsibility for rolling back the Russian air defense umbrella will fall on U.S. and NATO air forces which have precious little in the way of capability at present -- fifth-generation aircraft, survivable, penetrating munitions and electronic warfare capabilities -- with which to achieve this mission at acceptable loss levels. In the meantime, Western airpower will be unavailable to theater commanders for use as flying artillery. This leaves the U.S. Army, and its NATO compatriots, at the mercy of Russian long-range fire capabilities which can deliver larger salvoes at longer ranges over wider areas than NATO fire systems.

It has been so long since the U.S. Army faced either a threat from the air or being outgunned by enemy fire systems that it has kind of forgotten what’s important. The characteristics of U.S. fire systems (artillery and rockets) that matter for future high-end conflicts are: greater range, high rates of fire, tailorable effects and affordable munitions.

The U.S. Army can take its usual approach to this problem consisting of a ponderous requirements definition process, ill-informed by the knowledge resident in the defense industrial community, engage in an excessively drawn out series of competitions and then pursue a painfully laborious major program that might produce half of what is needed in twice the time and at higher costs.

Or, the Army can take advantage of innovations already available in the private sector that could revolutionize long-range fires in the next few years.

BAE Systems, for example, has developed a series of new rounds for the standard 5-inch naval guns and Army and Marine Corps 155mm artillery that significantly increases both range and accuracy. The 5-Inch Multi Service-Standard Guided Projectile (SGP) provides accurate fires out to 52 nautical miles to achieve desired effects. The 5-Inch Multi Service-SGP offers rapid time of flight and the capability of in-flight retargeting to address moving targets, changing target conditions and surface threats. A variant of the 5-Inch SGP, one with a sabot, can reach as far out as 70 kilometers.  By use of flight profiling, the 5-Inch Saboted SGP can execute Multiple Rounds Simultaneous Impact (MRSI) missions. Additionally, with in-flight retargeting capability, the 5-Inch Saboted SGP can address moving and relocatable targets.

Lockheed Martin has developed a new extended-range Guided Multiple Rocket Launch System (GMLRS), which has a range of more than 70km. The GMLRS XM30 rocket uses a GPS and inertial guidance package and small canards on the rocket nose to enhance accuracy. The new round can be fired by both the standard MLRS launcher and the very mobile HIMARS platform. Even more important, Lockheed Martin has developed the TACMS, an extremely precise, long-range (300km) guided missile carrying a 500-pound warhead.  Almost 600 TACMS have been fired in combat operations.

Boeing has come up with what might be the most transformational ideas for enhancing Army long-range fires. The Ground Launched Small Diameter Bomb (GLSDB) allows the artillery system to reach targets from significantly longer distances, up to 200km and engage hard-to-reach targets, while maintaining the Small Diameter Bomb’s flight maneuverability and accuracy. The GLSDB combines two highly successful, combat-proven systems, the SDB and M26 rocket, into an effective ground forces offensive capability. The system has been extensively tested overseas and only awaits the opportunity to be tested on an approved Army range.

Boeing also has in development a 155mm ramjet powered projectile with a range of some 200km and twice the speed of a rocket of the same range. This is exactly the kind of round the Army needs in order to conduct effective counterbattery fire against mobile Russian air defense and long-range fire systems.

If Russian integrated air defenses and massed missile and rocket batteries are to be defeated, it will take a new generation of U.S. long-range, high-speed, very precise weapons and projectiles. Systems over 100km are particularly important, as are those which provide a maneuvering warhead capability. One of the first jobs for Army missile and artillery systems deployed in Europe must be a saturation attack on the integrated air defense systems, opening the way for the Air Force and Navy to take the fight to the Russian Army. Remarkably, such systems exist and could be deployed in large number within a few years. That is, if the Army can maneuver around its own acquisition processes.