Will the U.S. Army Tolerate a U.S. Air Force 'Bait And Switch' On J-Stars Replacement? 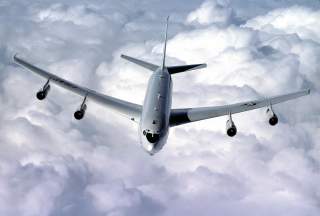 The U.S. military has no sooner unveiled its shiny new operating concept for future joint warfare, called Multi-Domain Battle (MDB), then the wheels seem to be falling off their new, all-purpose construct. As explained by the U.S. Army’s Training and Doctrine Command (TRADOC), the new concept was a necessary response to the U. S. military’s recognition that it was poorly postured, organized and equipped to address emerging high-end military threats. Only by integrating all the capabilities of the future joint force across both the traditional domains of warfare – air, sea and sky – and the newer domains of space and cyber, could these more powerful adversaries with their new capabilities be presented with a series of operational dilemmas too numerous and complex to be successfully countered. According to TRADOC,

U.S. supremacy is increasingly contested in the land, air, maritime, space and cyberspace domains. While the U.S. has been engaged in counter-insurgency operations for the last 15 years, potential adversaries have modernized and studied how we fight, and will seek to threaten our critical capabilities through multiple domains. Multi-Domain Battle is an emerging concept between the Army and Marine Corps, in concert with the Joint Force, to help maintain American military dominance in all five domains - land, air, maritime, space, and cyberspace, and across the electromagnetic spectrum.

For a while, there appeared to be general buy-in for MDB by the services. The Army and Marine Corps are creating an experimental unit called the Multi Domain Task Force under the auspices of U.S. Pacific Command to conduct special exercises. TRADOC, Air Combat Command, the Navy’s Fleet Forces Command and NATO’s Allied Command Transformation are reported to be collaborating on a common concept.

The Chief of Staff of the Air Force, General David Goldfein, seemed to add his support for the MDB concept in a letter to all his airmen titled “Enhancing Multi-Domain Command and Control ... Tying It All Together.” General Goldfein asserts that in order to successfully execute combat operation in the future, all elements of the joint force, but particularly the Air Force, must master multi-domain command and control (MDC2). The critical elements of MDC2 are: situational awareness, rapid decision-making, and the ability to direct forces to achieve commander's intent.

The U.S. Air Force has excelled at MDC2 for decades. It has a sophisticated architecture consisting of specialized platforms and sensors, communications networks, command centers and protocols that has provided not only air units but the joint force with unequal situational awareness.

A perfect example of how the Air Force has pioneered in the mission of providing multi-domain situation awareness to the joint force is the Joint Surveillance and Target Attack Radar System (J-Stars) airborne ground surveillance aircraft. The J-Stars is both a sensor platform and command and control node. Operating tens of thousands of feet in the air, the J-Stars’ radar can surveil an area of 20,000 square miles, watching and tracking hundreds of targets on land and sea simultaneously. It can accomplish this task through clouds, in bad weather and at night. The J-Stars carries up to 18 mission specialists who use onboard intelligence stations to process and disseminate critical battlefield information to ground, naval and air units. Since it was first deployed during the 1991 Persian Gulf War, J-Stars’ airborne ground surveillance has made a major contribution to the U.S. Army and Marine Corps’ attainment of decisive overmatch in multiple conflicts.

Given how much the ground services rely on airborne ground surveillance to achieve superior situational awareness, recapitalizing the aging and difficult to maintain J-Stars platform and enhancing its sensors would seem to make a lot of sense. In fact, after years of development and the expenditure of some $625 million, the Air Force was on the verge of awarding a contract for a new J-Stars that would provide enhanced performance while being cheaper to operate and maintain than the legacy platform.

Suddenly, the Air Force appears to be considering reneging on its commitment to provide U.S. ground forces with high quality airborne ground surveillance. Reports are surfacing that the Air Force is thinking about cancelling the J-Stars recap program. It is concerned about the future threat to large, radiating platforms such as the J-Stars.  Air Force leaders are wondering if the same or better information could be gathered by networking data from a variety of platforms including drones and space-based sensors. Could drones operating at high altitudes create sufficient standoff distance to safely conduct the airborne ground surveillance mission? Might the sensors be deployed in the air but the battle management left on the ground?

The Air Force isn’t proposing a different aircraft, an alternative sensor or a new approach to networking.  Instead, the Air Force wants to start over at square one with an Assessment of Alternatives (AoA) for a new, advanced battle management system. This process alone could take several years. The AoA would be followed by years, even decades, of research and development work on new, possibly classified, platforms and sensor programs and highly distributed sensor networks. All the while, our adversaries will be working on ever more lethal air defense systems and new ways of taking down electronic network.

In the end, the Air Force might not come up with anything better than what is being proposed for the J-Stars recap program. But even if it did, long before a new system or network could be deployed, age and maintenance costs would have mandated the retirement of the existing J-Stars fleet. This outcome would be devastating for the Army, which is currently struggling to develop the means to strike highly mobile targets at long ranges. Situational awareness will be critical to the Army’s strategy for high-end conflict: to fight outnumbered and win. Without the real-time information J-Stars provides, MDB could well be un-executable.