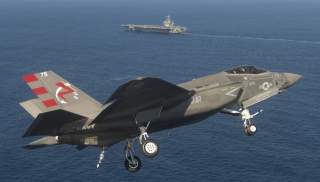 While a new naval future fleet architecture study from the Center for Strategic and Budgetary Assessments (CSBA) suggests that the U.S. Navy should maintain a fleet of 12 full-sized supercarriers, the paper also suggests that the service should develop a new class of light carriers. In the interim, while the new aircraft carriers are being developed, large deck amphibious assault ships could fill the role of the smaller flattops.

“The proposed fleet architecture adds to today’s CVNs smaller conventionally powered CVLs of 40,000 to 60,000 tons that would be incorporated into ARGs [amphibious ready groups] as part of the Deterrence Force,” the CSBA report states. “CVLs would provide power projection and sea control capabilities at the scale needed for day-to-day operations and for SUW, strike, and CAS as part of initial combat, freeing CVNs to focus on high-end integrated multi-carrier operations as part of the Maneuver Force or the Northern Europe Deterrence Force.”

The new conventional carriers would be roughly the same size as the World War II-vintage Midway-class—as they were configured toward the end of their service lives—and would carry a formidable air wing. Initially, the new carrier strike groups would be equipped the Lockheed Martin F-35B, but once the new CVLs are built and are operational, they would be able to embark more capable air wings.

“In the near-term, existing LHA/LHD amphibious assault ships would be employed as CVLs using a loadout of twenty to twenty-five F-35B aircraft. As they reach the end of their service life, LHA/LHD-derived CVLs would be replaced by purpose-built CVLs with a displacement similar to a Cold War-era Midway-class aircraft carrier and equipped with catapults and arresting gear,” the report states. “As a result, CVL air wings would be able to become slightly larger and incorporate airborne electronic attack (AEA) and airborne early warning (AEW) aircraft that are catapult-launched and require an arrested landing.”

The CVL air wing will evolve from today’s Marine air combat elements, if the Navy adopts CSBA’s plan. “CVL air wings will consist of about twenty F-35Bs, which can provide ISR, AEA, and targeting for the small-scale CAS, SUW, and strike attacks it will need to undertake as part of the Deterrence Force,” the report states. “This number of F-35Bs can be supported by the Marine Corps’ planned procurement of F-35Bs. It would impact the number available for shore-based operations under the Unit Deployment Program (UDP), but UDP operations could be supported by ARGs that are in the region, which would also increase the flexibility of the ARG ACE, since it would have multiple airfields ashore from which it could operate. For AEW and C2, LHA/LHD air wings will rely on shore-based maritime patrol aircraft and E-2Ds.”

Eventually, the CLV air wing will add its own organic electronic attack and airborne early warning. “As the Navy builds CVLs with catapults and arresting gear, the CVL air wing will evolve to add one to two UCAVs, one to two utility/tanker unmanned vehicles, one to two AEW aircraft, and AEA aircraft needed for the threat environment,” the report states. “This evolution will require Navy-Marine Corps air wing integration, as is done today in CVN CVWs.”

The U.S. Navy—which commissioned the CSBA report—seems to be embracing the idea. "The Navy is at an inflection point where we are back in competition.  Many of the ideas from these studies will help us win that competition,” chief of naval operations Adm. John Richardson said in an emailed statement.  “To win, our thinking must sharp and these studies help us - they give us exactly what we want...some fresh ideas. Each study provided ideas that in some cases validated and advanced the Navy's current thinking.  Some of the recommendations from the studies are so sound that we will act on them quickly.  Other ideas show promise and we'll study those hard.  The studies will be rolled into our program of analysis, war games, experiments, technology demonstrations, and prototyping."