Women in Combat: Getting the Facts Right First 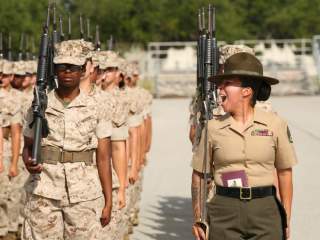 Anyone who hasn’t been trapped under a rock over the past few years has heard innumerable comments on the secretary of defense’s decision to admit women into combat career fields, and the build-up leading to this decision—the Marine Corps’ large-scale integration experiment, the Army’s adventures with females in Ranger training, etc. Most of these commentaries miss the mark in one way or another—some are little more than feelings and prejudice cloaked as professional opinion—and few begin where they should, with first principles and the law. Only with these foundations can we evaluate what the services have done in meeting the requirements laid before them. The Office of the Secretary of Defense (OSD), the services, and Special Operations Command (SOCOM) each funded research under the umbrella of this review. A SOCOM-funded survey showed that more than 80 percent of special operators think women are not strong enough to handle the demands of the job and 64 percent think women are not mentally tough enough. However, there are also supporters who say that for over a decade in Iraq and Afghanistan women have shown they are physically and mentally strong enough.

Given the strong opinions on both sides, are we focused on the right questions? What did the secretary of defense tell the services to do? And have the services adequately addressed the key points? We intend to address these questions with a focus primarily on the physical requirements.

Guiding Principles and the Law

In January 2013, Secretary of Defense Leon Panetta rescinded the Direct Combat Exclusion Rule, the policy that restricted women from serving in units with the primary mission to engage directly in ground combat. To inform policy makers and mitigate possible risks to combat troops such a decision might incur, Secretary Panetta directed the military departments to review occupational standards and related policies for the affected combat specialties, an effort known as the Women in Service Review. The services were given principles to guide their review, specifically:

Gender-neutral is a critical phrase in this guidance, but what does it mean? Here’s a hint: the law explicitly states standards may not be eased to ensure women can pass. But there is more to gender-neutrality than that. In fact, in 1993, Congress established a definition for gender-neutral occupational standards. Such standards:

“- may not use any gender quota, goal, or ceiling except as specifically authorized by law; and

“- may not change an occupational performance standard for the purpose of increasing or decreasing the number of women in that occupational career field.”

“- accurately predict performance of actual, regular, and recurring duties of a military occupation; and

The tests covered by these laws are the qualifying tests that are specific to occupational specialties, and not the annual physical fitness tests taken by all service members to ensure a general level of health and fitness. For example, members of the Air Force pararescue must currently take a test that includes push-ups, pull-ups, sit-ups, a run and a fin swim, in addition to their annual Air Force fitness test (which includes a 1.5 mi run, push-ups, sit-ups, and abdominal circumference).

So What Will Meet the Legal Requirements, Analytically?

There are arguments asserting current standards are time-tested. However, time-tested standards and tests are, in general, no longer suitable, unless they can be shown to meet the law. How then should the review directed by the secretary of defense and required by public law be conducted? First, one must determine the occupationally-specific physical requirements of each combat specialty. These requirements may be different for each career type and must be determined individually. It can be logistically challenging to routinely assess performance on a full array of combat tasks. Instead, the requirements can be linked to a set of physical fitness tests that are predictive of performance. There are many research methodologies that could provide an appropriate response to the Secretary of Defense direction and the services used a few approaches. Consider the Marine Corps, for example, which compared performance of all-male teams to mixed-gender teams in simulated combat situations.

What the Marine Corps study showed is that the average female marine may not be as physically capable as the average male marine. The study also showed that the bottom 25 percent of male marines overlap with the top 25 percent of female marines in terms of physical ability—yet these low-performing male marines are afforded an opportunity denied to comparable women simply because they were born with a Y chromosome. The Marine Corps is the only service to quickly publish such detailed results and ask for an exception to policy. They faced criticism and their request for an exception was ultimately denied. As pointed out by many critics, this approach did not address the real question—describing the physical requirements for the combat specialties under consideration—nor did it establish any criteria for describing physical qualifications for those specialties. In short, without such criteria it did not adhere to the principles or establish all of the requirements laid out in public law. The Secretary of the Navy did not believe the Marine Corps study provided evidence for the need of an exemption to gender integration and found that the study only emphasized the importance of defining physical requirements and developing “gender-neutral, job-specific standards for each combat specialty.”

Conveniently, there is a process to analyze job requirements that is widely accepted in occupational standards literature and has been used extensively by the Canadian and British militaries as well as numerous police and fire departments. In this process, experts are consulted to define the critical physically demanding tasks for their profession. Controlled simulations based upon the critical physical tasks are used to link performance on the simulations to physical fitness tests. Finally, the subset of physical fitness tests and standards that are predictive of performance on task simulations can be determined. As an example, following this process, a requirement for candidates to complete seven pull-ups may be directly and analytically tied to the task of climbing a rope within a specified amount of time. The results from this process are traceable, defensible, and satisfy the legal requirements.

The Navy, Army and Air Force have followed this process, though to different degrees. The Navy evaluated how the current selection and training procedures for SEALs are related to job performance. They used experts to design representative mission scenarios and define the characteristics believed to be needed for successful mission performance. The Army used a job requirements analysis to reduce male-only jobs to the five to seven most physically demanding tasks. These tasks were then translated into simple exercises such as a long jump or a grip test that could be easily performed at a recruiting station. The Air Force has conducted a full and robust study following the described process. Experts scored mission tasks to identify those most critical to operational requirements. Study participants performed fitness tests to assess their physical abilities and operational simulations mimicking the most critical physical tasks. Then performance on these simulations was correlated to performance on fitness data to create a predictive subset of fitness tests.

What Would Occupationally-Specific Tests Mean?

Will the majority of female members of the armed forces be able to pass these predictive fitness tests? Likely not. It is widely accepted that women are on average not as physically capable as men. However, just as Navy Secretary Ray Mabus explained, this is not a question of averages. Even the average male is ill-suited to become a Navy SEAL, and phrasing the question this way is wrong at its foundation. So what is the right question? Can a particular individual pass such a test and be a productive member of a combat specialty? If, for every female, the answer is no, then the exemptions requested by the Marine Corps may be appropriate, but they appear to lack the data to make such a claim. In fact, their data indicate that some women may be physically capable of serving in these specialties.