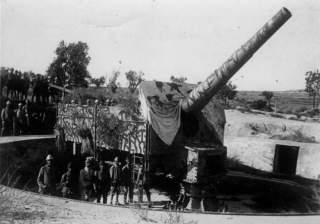 On April 25, 1915, 78,000 British, French, Australian, and New Zealand soldiers stormed ashore the Gallipoli peninsula amid a fury of Ottoman machine guns and shellfire. They struggled up treacherous bluffs wreathed with barbed wire, reading from maps as much as seventy years out of date. This was D-Day fought with the tactics and technology of World War I. The amphibious assault, intended to dismantle the Turkish guns that dotted the straits of the Dardanelles, would fail decisively. Facing hardened trench lines and determined Turkish defenders, the Entente forces would spend eight months and 47,000 lives to advance—at their maximum—four bloody miles. They would never come close to their day-one objective.

How did it go so wrong? There is a tendency, particularly given the centrality of Gallipoli to modern Australian and New Zealand national identities, to say that the operation’s failure was due simply to circumstance—that if the dice had rolled a little differently, the landing might have been a success. In fact, Gallipoli was doomed to fail from the start. It was an operation dictated by political pressures and grounded in a virtually impossible strategic objective. It was hastily conceived, executed by soldiers with virtually no amphibious preparation or training. Today, amid worldwide memorials to the courage of Gallipoli’s combatants, it is worth reflecting on another of its legacies: all military operations require rigorous, objective planning. If the final plan is vague and aspirational, it is worse than having no plan at all.

Seeds of a Catastrophe

The path to Gallipoli began on November 3, 1914, when First Lord of the Admiralty Winston Churchill (essentially a much-empowered U.S. Secretary of the Navy) ordered the bombardment of Turkish forts at the mouth of the Dardanelles in response to the Ottoman Empire’s entry into the war on the side of Germany. This was a feint, comprising only four allied cruisers and twenty minutes of shelling, ordered at Churchill’s own initiative. In a stroke of luck, one shell struck a direct hit on a Turkish magazine; the ensuing explosion disabled roughly a dozen heavy guns.

This early attack had no strategic significance—damage to the Ottoman defenses was quickly repaired. However, it carried two long-lasting consequences.  The first was to accelerate Turkish fortification of the Dardanelles and Gallipoli peninsula, a process that would continue for the next six months. The second was to instill in Churchill an unrealistic expectation about the power of naval bombardment against hardened coastal defenses. He became a vociferous supporter of naval action against the Ottoman Empire, intent on bringing about “the end of the Turkish menace.”

As the Great War ground to bloody stalemate in France, British and French military planners desperately sought ways to open a new front against Germany and relieve their beleaguered Russian allies. As time passed, Churchill’s proposal became more attractive. A naval action to “force the straits” of the Dardanelles, the thinking went, would clear a path through to the Black Sea, aiding Russia and opening a new front against Germany. By placing Istanbul under threat of direct attack, the Entente could even coerce the Ottomans into a separate peace.

It mattered little that the Royal Navy had never before operated in waters so narrow and contested: ringed by heavy guns, peppered with submerged mines, and supplemented by dozens of mobile mortar batteries. It was equally unimportant that a central assumption of the whole effort—that the Turks would surrender the moment their capital came under fire—was entirely unsubstantiated.  Indeed, as the catastrophic bombing campaigns of World War II would show, the destruction of cities was only very loosely correlated with the imposition of peace. The strategic thinking behind Gallipoli was built on a foundation of sand.

In the end, Churchill’s lobbying won out; these crucial details were ignored. A massive naval operation was authorized, with preparations for a possible amphibious landing. Remarkably, seeking to shed excess inventory, military planners instructed that old and obsolete battleships should make up the majority of the fleet—small comfort for those ordered to sail them.

It was a vast armada of sixteen battleships, numerous destroyers and cruisers, and a swarm of minesweepers that sailed into the Dardanelles on March 18, 1915, a month into the campaign. This was the largest fleet the region had ever seen. The ships made slow and steady progress, blasting away coastal defenses on either side of the straits until they drifted into an undetected column of mines. Three battleships were sunk; several others damaged. 700 sailors drowned. It was the worst loss for the Royal Navy in over a century. Churchill and his planners resolved to try again—this time with ground forces.

The commander of this newly inaugurated Mediterranean Expeditionary Force (MEF) was General Ian Hamilton, a well regarded combat veteran who had been previously tasked with defending the British home islands. Hamilton, given charge of 78,000 British, French, Australian, and New Zealand infantrymen, received only the vaguest of instruction. He only knew that he had to act quickly. As then-Marine Corps Major C.R. Spofford wrote in his 1994 study of Gallipoli’s planning:

Hamilton…departed the next day for the Eastern Mediterranean, accompanied only by his undermanned and largely inexperienced General Staff… Remarkably, forty-three days later, he would lead an amphibious assault on a scale never witnessed before. In this short time, he had organized, equipped, and trained his multinational forces for an amphibious assault against a prepared, numerically superior enemy…Yet, just seven months later, he would be relieved of command.

Although Hamilton energetically marshalled his forces and coordinated the loading and embarkation of 78,000 soldiers from four countries in roughly 200 ships (an extraordinary feat under any circumstances, much less when limited to WWI-era technology), he evidenced significant failings as a commander. Pressured by politics and the expectations of his superiors, he was loathe to request more time or resources, much less accurately report the situation on the ground. In a burst of temper, he even denied an administrative staff tasked to help him, arguing that they had come too late to do any good.

Ironically, Hamilton became so consumed by planning the landings at Gallipoli—coordinating a logistical ballet of 200 ships, inventing new and untried amphibious tactics—that he had little time to anticipate the actual battle. He had virtually no knowledge of the terrain of Gallipoli, nor the number of Turkish defenders. Some of his operational maps dated to the Crimean War. The enemy scarcely received any attention at all; it was simply assumed that the Turks would turn tail and flee at first contact. This was a terrible mistake. At Gallipoli, soldiers of the Entente faced some of the best-trained and best-led infantry divisions in the Ottoman Army.

Most damningly, Hamilton planned almost exclusively for mission success, with only one rough, alternative plan, titled “Suggested Action in event of Failure.” There was no middle ground; no serious thought given to the possibility of stalemate or enemy counterattack. Hamilton’s soldiers would pay the price.

Gallipoli’s preceding strategic and operational failures exacted a heavy toll on the men who reached the peninsula’s rocky shoreline (many by rowboat) on the morning of April 25, 1915. Landing on five separate beaches, the Entente offensive was immediately beset by uncertainty and poor coordination. The soldiers of the Australian and New Zealand Army Corps (ANZAC), drifting a mile off course, were surrounded by steep cliffs on three sides, layered with Turkish trench lines and machine gun nests.  Although initially disorganized, the Turks quickly rallied and began laying crippling fire on the allies’ exposed beachheads. John Keegan describes one such opposed landing in The First World War:

As the River Clyde grounded and the Hampshires and Munster Fusiliers struggled to find a way out of the ship and on to the gangplanks that were to lead them ashore, four Turkish machine guns opened fire. They had already raked the tows which beached first. The columns on the gangplanks, packed like cattle ranked for slaughter in an abattoir, tumbled one after another to fall bleeding into the sea, there to drown at once or struggle to their death in the shallows.

Logistical troubles struck almost immediately. In order to avoid having to land supplies too early, Hamilton’s staff had determined that every man should carry three days’ worth of rations and water in addition to their combat kit. Accordingly, leaping from exposed boats into waters too deep and far from the shore, soldiers had to choose between abandoning their packs or drowning under their weight. Even worse, the waiting British hospital ships, expecting 500 day-one casualties, were soon swamped by ten times that number. Thousands of wounded men were made to lie, dying, on the overcrowded beaches, raked by Turkish machine guns and artillery.

By the close of the first day, the forces of the Entente were nowhere close to where Hamilton’s plan said they should be. With Ottoman soldiers beginning to press the counterattack, any remaining momentum among the allies was lost. As days turned into weeks, both sides burrowed deeper into Gallipioli’s treacherous cliffsides. The offensive—intended to swiftly disable Ottoman coastal defenses in support of the Royal Navy—had instead devolved into another version of the trench warfare characteristic of the Western Front.