World War III Question: Could Russia or China Beat the F-22 Raptor in a Fight? 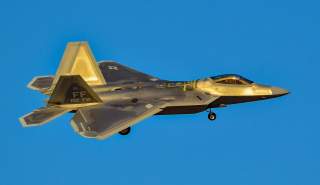