Would America Back India in a War? 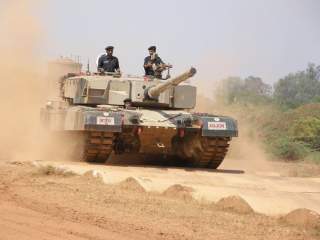 Last month, I had the privilege of taking part in a Track 1.5 strategic dialogue on Indo-U.S. relations. Held in New Delhi, the gathering was an unabashed success, and the richness and candor of the discussions aptly reflected the renewed momentum of the bilateral relationship. Over the course of the event, much mention was made of Obama’s recent visit, and of one document in particular: the U.S. India Joint Strategic Vision for the Asia-Pacific and Indian Ocean Region.

Shortly after having completed my presentation on Indo-U.S. cooperation in the Indian Ocean, I was asked a pointed question by a retired Indian Navy Admiral. Should India, queried the Admiral, read more deeply into both governments’ decision to jointly reference the importance of freedom of navigation in the South China Sea? More specifically, did this mean that the United States would provide military assistance to India in the event of a Sino-Indian naval confrontation in maritime Southeast Asia?

As the distinguished veteran concluded his remarks, I could almost hear the sighs of relief emanating from some of the U.S. government participants. Thank God, they were no doubt thinking, that this question was addressed to a non-government employee. I found myself compelled, however, to give the vague and somewhat bureaucratic response that any U.S. official would have made.

Much would depend, naturally, on the circumstances of the incident, and whether China was clearly perceived as the aggressor. But, I added, one must not forget that while India was a valued strategic partner of the United States, it was not an ally. Strategic partnerships, however tight and wide-ranging they may appear, do not come with the binding security guarantees that traditionally characterize alliance structures.

And therein lies the rub. Even though the Indo-U.S. entente is perhaps this century’s single most important bilateral relationship, with the greatest potential to positively shape the Asian security environment, it is not-nor will it ever be-a formalized alliance. The reasons for this singular state of affairs are well known.

Indeed, since independence, New Delhi’s grand strategy has always been coterminous with a quest for greater strategic autonomy, and with a solid aversion for any form of partnership that could lead to entanglement. This autonomy is perceived as a key enabler, allowing India to practice a “multi-vectored” diplomacy that maximizes freedom of maneuver, while minimizing the risks of friction that could flow from more solidified alignments.

Historical studies have pointed to the inherent plasticity of any successful grand strategy. This is something that India’s foremost strategists have fully interiorized, with a much-discussed-and unfairly lampooned-2012 study placing a strong emphasis on subtlety over “narrow linear narratives about what serves our (India’s) national interest,” in a world which is described as both fragmented and in flux. India’s grand strategy, the authors pursue, “will require a skillful management of complicated coalitions and opportunities in environments that may be inherently unstable and volatile rather than structurally settled.”

As India’s growth in wealth, influence and power becomes more manifest, it has presented the United States with a unique form of diplomatic challenge. While Chinese nationalists have argued in favor of a “new model of great power relations,” India’s political leadership seeks, first and foremost, a new model of strategic partnership. This partnership may come to yield a number of rich dividends in the defense realm, in terms of technology and intelligence sharing, joint training, or arms sales. Yet singularly absent are the most important components of any alliance—a clear strategic direction, and a sense of reciprocal security commitments and/or guarantees.

(Recommended: If America and China Went to War: Would India Join the Fight?)​

India may, according to some reports, hold more joint military exercises with the United States than any other country, but nobody quite knows the conditions under which Indian jawans and U.S. grunts would find themselves crouching in the same foxhole.

Similarly, both countries’ defense communities may be moving toward cooperating on issues as sensitive and as critical as aircraft carrier design, but it remains uncertain whether the U.S. Navy would intervene were the INS Vikramaditya to find itself crippled by a Chinese torpedo.

To be fair, neither country expects the other to automatically intervene in the event of conflict. Indian security managers have long grappled with the grim prospect of fighting a two-front war alone, although the rapid growth in Chinese military strength and steady hemorrhaging of India’s fighter squadrons have begun to raise serious questions over the continued viability of this posture. American planners, for their part, rarely factor Indian military forces into their wargaming scenarios for the Indo-Pacific. Influential champions of the Indo-U.S. relationship, such as Ashley Tellis, have rightly observed that it does not require clearly defined mutual security commitments in order to be transformational, and that it is in the U.S. interests to bolster Indian power regardless. By virtue of its sheer size, geographical position, and latent capabilities, there is a certain degree of automaticity to India’s emergence as a major balancing power in Asia.

Nevertheless, it would no doubt behoove security communities in both countries to more frequently discuss and game out black swan scenarios that could, depending on how they are managed (or mismanaged), either irreparably damage, or durably reinforce the Indo-U.S. security relationship.

The most oft cited, and perhaps most likely, scenario is another major terrorist attack in India, with origins that clearly trace back to elements within Pakistan’s byzantine security apparatus.  The government of Prime Minister Manmohan Singh was widely lauded by the international community for its measured response following the Mumbai attacks of 2008. Few analysts believe that the current Indian government would-or could-exert such restraint. Modi’s forceful response to recent disturbances along the Indo-Pakistani border, when viewed in combination with the Indian National Security Advisor’s recent statements on the need for India to adopt a more “offensive form of defense,” should act as clear signals to American observers that India cannot-and will not-simply absorb another Mumbai.

There would be enormous public pressure within India for the government to act, and a roster of punitive actions would no doubt be considered. These options might range from the establishment of a maritime exclusion zone off Pakistan’s Makran coast, to cross-border special forces raids, to standoff missile and airstrikes against terrorist training camps, with the last option being the most likely. As people such as George Perkovich have thoughtfully demonstrated, all of these options are fraught with risk, and have the potential for grave escalation. Yet if military inaction on the part of the Indian government is no longer conceivable, they will all need to be considered—especially if the only alternative is a large-scale mobilization of ground forces in the vein of Operation Parakram.

If India were to engage in a military riposte against terrorist or hybrid elements on Pakistani soil, what should be the position of the U.S. government? Should the U.S. publicly support India’s actions, or should it remain silent? It is highly unlikely that the Indo-U.S. relationship could recover were Washington to choose the latter. Perhaps more importantly, should the U.S. go beyond publicly supporting to enabling certain Indian cross-border strikes, by providing actionable intelligence? One could imagine that in some cases, providing a more accurate picture of the situation might in fact help mitigate escalation and reduce casualties, either by helping India discriminate in-between terrorist actors and civilians co-located within dense urban environments, or by helping Indian military planners more effectively tailor their response. So might the emergency provision of certain forms of military equipment, ranging from precision munitions to night vision equipment for India’s special forces. U.S. policymakers would need to carefully balance these considerations against their longstanding concerns over the risks of irredeemably alienating Pakistan’s men in khaki.  These decisions would naturally be heavily influenced by a number of other externalities, such as the state of domestic and international opinion, the number and nationality of the terrorists’ victims, and the importance attached by the U.S. administration to its respective ties with each country.

If, God forbid, the crisis were to evolve into something far more serious, and U.S. intelligence officials were to get wind of the imminent deployment within Pakistan of tactical nuclear weapons, should they alert their Indian counterparts? Choosing to do so would almost certainly be viewed by the Pakistanis as an act of brazen hostility, but opting for silence might be perceived by New Delhi (were its intelligence services to subsequently find out), as an equally unmentionable betrayal.

The tense situation along the Sino-Indian border and how it might pertain to the future of the U.S.-India security relationship also warrants greater scrutiny. In the event of a Sino-Indian border war, would decision-makers in New Delhi once again turn in desperation to the United States for assistance, as they did during the 1962 war? And if they did, would an increasingly cautious and war-weary United States respond with the same vigor of the Kennedy administration? What form could U.S. assistance take? Might the United States, for example, be able to provide vital non-kinetic assistance in the form of cyber attacks against Chinese battle networks? Could the U.S. work behind the scenes to provide Indian forces with more robust space-based surveillance intelligence and better real-time targeting information? Would such forms of covert assistance be considered less escalatory than providing India with direct military support? Or would the White House, echoing its current ambivalence to the arming of forces in Ukraine, prevaricate and/or refuse to come to India’s aid? These questions could also apply to India’s stance in the event of a Sino-U.S. war in Northeast Asia. Would New Delhi remain on the sidelines while conflict raged in-between its foremost geopolitical rival and its most powerful democratic partner? Might such an event be viewed by India as a welcome opportunity to consolidate its own position along the Sino-Indian border? Could India provide the United States and its allies with intelligence on Chinese subsurface and surface deployments in the Indian Ocean? If conflict were to spill out of the Malacca Strait and into the Indian Ocean, how would the Indian Navy and Air Force respond?