Would America Have Been Able to Shoot down North Korea's Missile? 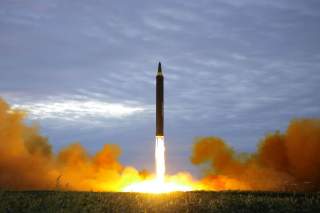 North Korea tested an intermediate range ballistic missile on August 28 during Pyongyang’s latest provocation against the United States and its allies.

During this latest missile test, the weapon overflew Japan. But did the United States or Tokyo have the option to shoot down the North Korean missile? Analysts are not certain, but the answer is likely: No.

"The U.S. Department of Defense detected and tracked what we assess was a single North Korean ballistic missile launch at 4:57 p.m. Eastern time Aug. 28.  Initial assessment indicates the launch of an intermediate range ballistic missile,” reads a statement from the U.S. Pacific Command (PACOM). “The launch occurred in the vicinity of Sunan Air Base, North Korea and flew east.  The ballistic missile overflew the territory of northern Japan before landing in the Pacific Ocean approximately 500 nautical miles east of Japan. We are working with our interagency partners on a more detailed assessment and we will provide a public update if warranted."

The Pacific Command statement also reinforced America’s commitment to defending its allies. "Our commitment to the defense of our allies, including the Republic of Korea and Japan, in the face of these threats, remains ironclad,” the PACOM statement reads. “We remain prepared to defend ourselves and our allies from any attack or provocation."

But what can the United States and Japan do to defeat incoming North Korean ballistic missiles? The answer there is: probably not a lot. “It's not clear whether they had any shot at the missile, since it passed through space over Japan,” Joshua H. Pollack, editor of the The Nonproliferation Review and a senior research associate at the James Martin Center for Nonproliferation Studies. “Aegis is capable, but that doesn't mean it can catch a missile while it's rising. My understanding is that Aegis operators generally try to park their boats between launchers and targets, but closer to the targets, in order to catch the attack late in flight. So they are probably present in the Sea of Japan more than in the Pacific Ocean at most times.”

Arms control expert Joseph Cirincione, president of the Ploughshares Fund, however, is adamant that there is no way Japan could have shot down the North Korean missile. “ No,” Cirincione said. “Patriots are point defense for short-range missiles. Aegis on the cruisers and destroyers are the same. The THAAD units in South Korea are too far away. None of the missiles defense units in place could have intercepted that test even if they worked perfectly, which they do not.”

Moreover, even if Japan invested more in additional missile defense systems, it is highly unlikely it would have been able to intercept the North Korea IRBM test. “Even if Japan bought THAAD it would have to place it in Sapporo (on Hokkaido) to have any chance of hitting a test missile flown that far north,” Cirincione said.

Moreover, in the event of a real attack, it is unlikely that any missile defense system would provide Japan with a reliable defense. “There is not a missile defense weapon in existence that could offer a reliable protection against a determined North Korean attack with multiple missiles, countermeasures and efforts to suppress the defenses,” Cirincione said.

Pollack also added that defensive interceptors are both expensive and scarce—it is not wise to waste the weapons in a vain attempt to thwart a North Korean missile test. “Even if they did have a shot, why would they take it? The missile was headed into open waters,” Pollack said. “Basically, defensive assets are scarce, and there's every reason to concentrate them on defending the country. That's what they're for.”

As for resolving the impasse with North Korea—analysts are pessimistic. “I don't know if there is any mutually acceptable resolution anymore,” Pollack said. “I would be happier if we at least had a crisis-management mechanism, some kind of military-to-military hotline to avoid serious miscommunications.”

Cirincione said that the only possible solution—and it’s stopgap at best—is to try to negotiate a testing freeze. “The only solution is the one experts and former officials such as Bill Perry have been urging for the past few years: combine tough, multilateral sanctions with creative diplomacy to negotiate limits in the program, starting with a testing freeze,” Cirincione said. “It might not work, but it is the only option that might work and the only solution that has worked in the past. We should immediately begin a dialogue with North Korea to explore the feasibility of new, formal negotiate.”

Ultimately, the fact is that North Korea is now a nuclear power with long-range missile capability. The United States will essentially have to learn to live with a nuclear-armed Pyongyang—there is no putting the genie back in the bottle.