Would America's B-2 Stealth Bombers Work During a Nuclear War? 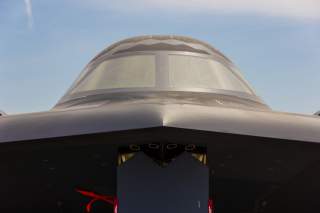 The Air Force is upgrading computer and communications technology for its B-2 stealth bomber so the aircraft is prepared to execute attack missions in the event of nuclear war.

The service is integrating more resilient receivers, processors and waveforms better able to function in an environment where there has been a nuclear detonation - a circumstance called high-altitude electro-magnetic pulse environment.

A B-2 crew, for instance, may need to execute mission orders from the President and receive crucial details of enormous consequence, should a nuclear weapons confrontation take place. For this reason, making sure lines of communication are “hardened,” or sufficiently durable to operate in such an extreme nuclear environment, would be of utmost importance in a highly compromised combat communications scenario.

The Air Force will add a Common Very Low Frequency Receiver to improve communication in the event of a nuclear detonation.

“We are working on technical maturation and risk reduction. One of the areas we are invested in is nuclear command and control communication,” Lt. Gen. Arnold Bunch, Military Deputy, Office of the Assistant Secretary of the Air Force for Acquisition told Scout Warrior in an interview.

The connection with the new receiver uses the Very Low/Low Frequency, or VLF/LF, waveform. It is secure and beyond line of sight, Air Force developers said.

However, the B-2 cannot transmit VLF/LF data -- it can only receive data. Once fielded, B-2 aircrew could receive targeting instructions from the President, but would not be able to transmit information.

There are only two waveforms that would be survivable in this kind of scenario – one of them is Extremely High Frequency, or EHF, which relies upon the AEHF satellite constellation, and the other is VLF, service acquisition experts explained.

The new receiver will be added onto the B-2’s existing communications infrastructure, called the Adaptable Communications Suite, which has provided Command and Control capabilities to the jet since 1998.

Hardware for the new B-2 VLF/LF receiver system is on contract, with installations starting next year, Air Force officials told Scout Warrior.

The Air Force has also been working on adding the Family of Advanced Beyond Line-of-Sight Terminals and a low observable antenna to support EHF and Advanced EHF communications connectivity. Later stages of the upgrade provided full software integration of the B-2 EHF SATCOM upgrade, including Global Information Grid connectivity, the Pentagon report said.

As a key portion of the air component to the nuclear triad, the B-2’s nuclear weapons capability is intended to function as a deterrent by holding potential enemies at risk of attack or retaliation, should that be required.

In coming years, the B-2 will be armed with next generation digital nuclear weapons such as the B-61 Mod 12 with a tail kit and a Long Range Stand-Off weapon or, LRSO, an air-launched, guided nuclear cruise missile, service officials said. The LRSO will replace the Air Launched Cruise Missile, or ALCM, which right now is carried by the B-52 bomber, officials said.

The B-2 can also carry a 30,000-pound conventional bomb known as the Massive Ordnance Penetrator.