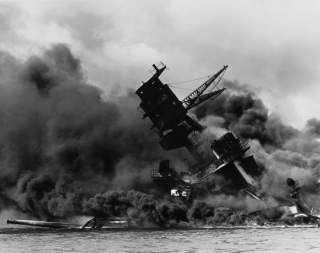 If Imperial Japan’s past turns out to be a Rising China’s prologue, Beijing could well order a Pearl Harbor-style attack on America, possibly within a decade.  Potential targets range from American aircraft carriers in the Taiwan Strait and bombers on the runways of Okinawa and Guam to the military satellite network serving as the eyes and ears of the U.S. high command.  Even civilian infrastructure like America’s electricity grid may be at risk.

If you believe that prediction to be alarmist, consider these historical parallels with another rising Asian power during the early 20th century.

Imperial Japan claimed much of Asia by “divine right” and saw the region as a strategic source of food, natural resources, and markets. By December 7th, 1941, it occupied large swaths of China and French Indochina; all of Korea and Taiwan; and its highly capable military was primed to drive the British out of Borneo, Burma, Hong Kong, Singapore, and Malaya; the US out of the Philippines; and the Dutch from Indonesia.

Rising China similarly claims great chunks of Asia by “historical right” and likewise sees the resources and markets of Asia as vital to its growth. It already exercises great influence over Burma, Cambodia, and Laos to North Korea even as it subjugates Tibet and zealously asserts its sovereign right to the “renegade province” of Taiwan – one of Asia’s most vibrant democracies and home to more than 20 million people.

Rising China also asserts de jure sovereignty over 80% of the South China Sea – through which more than one third of global trade passes – and even claims the entire Indian state of Arunachal Pradesh as “Southern Tibet.” Perhaps most dangerous, Beijing’s government-controlled press has whipped its populace into a nationalist frenzy over Japanese control of the Senkaku Islands, which China calls the Diaoyu.

As with Imperial Japan, the only force standing in China’s expansionist way is an America committed to democracy, the rule of law, freedom of the seas, and defense of its Asian allies. Beijing’s clear fear is that America will do what it once did to Imperial Japan – impose a punishing naval embargo on its oil imports and global trade.

Here, it is well worth remembering America’s embargo of Imperial Japan did not result in the retreat of Japanese occupation forces as the U.S. demanded.  Rather, Tojo’s bombers simply – and infamously – struck Pearl Harbor. That Pentagon analysts openly talk today of “economic strangulation” should a belligerent China move on Taiwan, the Senkakus, or some other revanchist target only stokes Beijing’s fear.

Given Rising China’s revanchist dreams and U.S. embargo nightmare, it is hardly surprising the People’s Liberation Army is strategically designing its capabilities – so-called “anti-access, area denial” weapons – to push U.S. forces out of the Western Pacific. On this point too, history is likewise instructive.

Imperial Japan’s metamorphosis from an autarkic and backward kingdom to a global trading nation and world power began with the Meiji Restoration in 1860, which centralized the Japanese state even as it opened Japan’s military to an infusion of foreign technology.  As early as 1880, British and French shipyards began to churn out modern Japanese warships for what would become the most powerful fleet in Asia.

Rising China is likewise constructing one of the world’s finest navies with considerable foreign assistance. French diesel engines run many of its ships. German air-independent propulsion systems make Chinese subs some of the most stealthy in the world, and China’s fleet of Australian-designed fast attack catamarans threaten U.S. aircraft carrier strike groups with cruise-missile salvos.

The catalyst for the modernization of China’s navy was its own version of a Meiji restoration, Deng Xiaoping’s opening of the Chinese economy to global trade in 1979. Just as Imperial Japan saw the need to transform its navy from a coastal defense force, Deng’s right hand man Admiral Liu Huaqing saw China’s need to morph from a continental to maritime power.

Today, China has the world’s fastest growing fleet of submarines, its own aircraft carrier, the world’s most diverse missile arsenal and “5th generation” stealth jet fighters – built with stolen American designs – capable in the near-future of challenging for air dominance over Asian waters. Add to this impressive arsenal cyber and space warfare capabilities that pose a significant threat to America’s perennial command of the strategic high ground, and you have all the makings of a superpower challenge to U.S. dominance of the Asia-Pacific region.

Despite China’s rapidly expanding military capabilities, many analysts and pundits continue to insist it remains decades behind in its military development – much as their 20th century counterparts vastly under-estimated Imperial Japan.  It wasn’t until Japan’s navy destroyed Imperial China’s vaunted Beiyang Fleet in 1894 and then summarily defeated Imperial Russia in 1905 that the world awakened to the fact of Japan as a rising Asia-Pacific power.

How Imperial Japan sought to strategically defend its empire from U.S. intervention likewise offers an interesting parallel to Rising China.  In Japan’s version of anti-access, area denial, it sought to keep the U.S. Navy out of Asian waters by building a defensive perimeter along the so-called First and Second Island Chains and far out into the Pacific. The island fortresses Imperial Japan would string together along these twin perimeters would, of course, become some of the fiercest battlegrounds of World War II – hallowed ground with names like Tarawa, Kwajalein, Okinawa, Guadalcanal, and Guam.

In Rising China’s version of anti-access, area denial, it seeks to drive U.S. forces from its forward bases in Asia and out beyond the First and Second Island Chains – and eventually all the way back to Hawaii and Pearl Harbor. To achieve this goal, Rising China even shares an obsessive focus with Imperial Japan on designing weapons explicitly to sink American aircraft carrier strike groups.

The weapon of choice for Imperial Japan was its Long Lance torpedo.  It could be launched from cruisers and destroyers from distances well outside the range of U.S. artillery and competing torpedoes.  For Rising China, its anti-ship ballistic missile – the Chinese openly call it a “carrier killer” – can be fired from over a thousand miles away and hit an American aircraft carrier traveling at speeds of up to 30 knots.

At the geopolitical level, there is even this “axis of evil” parallel: While Imperial Japan and Nazi Germany entered into an uneasy but expedient alliance, there is today a far more comfortable authoritarian bond growing between Xi Jinping’s China and Putin’s Russia.  This Sino-Russian axis will likely be far more dangerous because it unites the massive work force and weapons factories of China with the world’s largest repository of natural resources and Russia’s vaunted air and missile defense systems.

Ultimately, it may be the one big difference between Imperial Japan and Rising China that will turn out to be of the greatest strategic significance. This key difference is rooted in Josef Stalin’s famous dictum “quantity has a quality of its own.”

As a small island nation, Imperial Japan clearly understood America’s manufacturing might would always give it the “quantity” edge in weapons and that the key to any victory was to beat America on the “quality” front.  To that end, Japan engineered leading edge weapons like its vaunted Mitsubishi A6M Zero fighter aircraft.

As the world’s “factory floor,” and with highly regarded schools churning out up to 10X the number of scientists and engineers as the U.S., China faces no such quantity limits –  even as it pushes the boundaries on innovative military tech. The sobering Clausewitzian “War By Algebra” reality here is that China will be able to build many more ships and planes than an America constrained by budget issues and with a work force but one-fifth the size of China’s.

This, then, is a very sobering chessboard for America to contemplate almost 75 years after Japan’s attack on Pearl Harbor.  However, if this nation has learned anything from that infamous attack, it is this: Never again should America be taken by surprise by a rising power in Asia that may well mean to do our country harm.

To avoid any such surprise – and to avert any such harm – we must not be complacent in the face of an increasingly aggressive Beijing. Nor should we assume – as a naïve Europe did on the eve of World War I – that strong economic ties between strategic rivals will always be enough to avert conflict.

Rather, we must acknowledge today’s chessboard, rebuild our military, broaden and deepen our technology base, and reinvigorate an economy and manufacturing base upon which our national security so thoroughly depends. The 2016 presidential candidate who best articulates exactly how to do that will likely win a race over which a Rising China now casts an increasingly long and darkening shadow.

Peter Navarro is a business professor at the University of California-Irvine and author of Crouching Tiger: What China’s Militarism Means for the World (Prometheus Books).

AUTHOR’S NOTE: You are cordially invited to join Peter Navarro, who will speak on this issue on December 7th at a noon luncheon in Washington, D.C. at the Center for a New American Security.  Contact Phoebe Benich at [email protected]. Seating is limited.