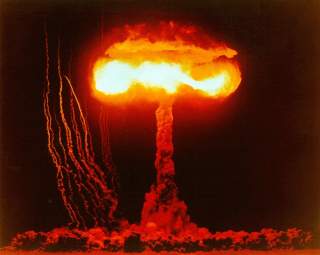 I’ve read with interest Andy Nikolic’s recent articles about the need to address the threat posed by an Iranian nuclear capability. In October he wrote that “the threat of a nuclear-armed Iran would dwarf that which is posed by ISIL,” and this week he reminded us that:

“the threat now posed by a nuclear malevolent Iran is emphatically much worse. As the crow—or more aptly, the missile—flies, the distance between Tehran and Tel Aviv is just under 1600 kilometres (approximately 1000 miles). Hence, the time from launch to impact is brief; potentially mere minutes to Armageddon.”

The language is dramatic but the posts lack much by the way of reasoned argument. Don’t get me wrong, I’m a devoted counter-proliferator and think that a nuclear-armed Iran should be stopped simply to avoid other states seeking to do the same. But I disagree with the view advocated by Andy Nikolic and others that a nuclear-armed Iran will seek to use those weapons to become more regionally influential or to launch them against Israel.

The main reason I oppose such views is because they lack intellectual rigour. Firstly, simply having nuclear weapons doesn’t make anyone more influential. Pakistan and India are no more influential following their acquisition of a nuclear capability than they were before it. Influence comes through a range of media, and Iran has always understood that in many ways it’s an outsider in the region—ethnically, linguistically and religiously different from its Arab and Turkic neighbours. Hence its reliance on allies and proxies to exert influence—and that wouldn’t change if it became a nuclear-capable country.

Second, Andy’s argument is predicated on Iran’s seeing a nuclear weapon as simply an offensive weapon. The reality is that nuclear weapons are often the ultimate defensive weapon. Tehran could look east and see how Islamabad’s nuclear capability has stopped it from going to war with India, and it could look west and see how Tel Aviv’s undeclared capability has deterred its neighbours from invading it. Its nuclear capability hasn’t stopped conflict or guaranteed military success for Israel, as it has faced two intifadas, invaded Gaza, had to withdraw from southern Lebanon and fought a short but bloody war against Hizbullah in 2006. But none of those have been existential threats.

The argument follows that Tehran sees a nuclear capability as the ultimate shield, rather than as a potential sword. Having been invaded by the British and the Soviets in World War II, and then suffering through eight years of a war with Iraq backed by its Arab neighbours and some in the West that cost hundreds of thousands of lives, it’s easy to see the logic of Tehran viewing a nuclear weapon as the ultimate shield.

In order to protect the Islamic Revolution the leadership seeks to guarantee its survival from external attack first and foremost and a nuclear weapon would do that. Any preemptive use of such weapons would be nearly guaranteed to receive more in return and hence end the rule of those charged with ruling in accordance with God’s will. Again, there seems to be no reason why the Supreme Leader would seek to do such a thing. Some have argued that a strain of Shi’a millenarianism would see Iran loose off volleys of nuclear weapons in order to set the conditions to hasten the arrival of the Awaited Imam. There’s no explanation of how that would follow, nor evidence of any support for such a concept by the Supreme Leader, who is in charge of Iran’s nuclear file.

Andy claims that Iran exhibits “a determination to leverage the anticipated benefits of that [nuclear] investment” and that it seeks a nuclear capability “because of the prestige, power and authority which Iran believes such weapons would give it, both regionally and beyond.” What he doesn’t do is explain exactly what he sees those benefits to be, nor how he sees Tehran achieving power and authority as a nuclear state. I agree that Tehran seeks regional influence commensurate with how it views its rightful place in the international system. But I don’t see how having a nuclear capability achieves that other than by safeguarding it from existential threats. Rather, I’d argue that Iranian national power, and hence that of the Islamic Revolution, will be furthered by leveraging its enormous potential economic and human capabilities. In many ways that’s what its Gulf neighbours truly fear.

Rodger Shanahan is at ANU’s National Security College and is a non-resident fellow at the Lowy Institute for International Policy. This piece first appeared in ASPI's The Strategist here.