Would Navy Aircraft Carriers Be Useless in a War Against Russia? 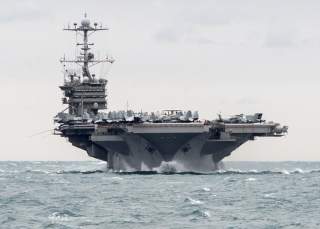 While BALTOPS has been an annual exercise since 1972 in the middle of the Cold War, what is remarkable about this year’s war games is that Harry S. Truman was sailing in the Adriatic Sea—off the coast of Italy—during the exercise. That means that U.S. Navy aircraft—assigned to Carrier Air Wing One (CVW) 1—flew north across the width of the European continent to participate in the Baltic Sea exercise. Indeed, as the Navy itself notes, this was the first instance of American carrier-based assets participating in BALTOPS since its inception.

“The ability to operate in the Adriatic and support allies in the Baltic region demonstrates that we have the capabilities to match our resolve,” Rear Adm. Gene Black, commander of Carrier Strike Group 8, said in a statement released earlier this month. “It is further proof of the flexibility and agility we bring to the fight, and reaffirms our commitment to regional security and cooperation to our partners and allies.”

However, while the participation of carrier-based air power in the Baltics region from the opposite side of the continent is an impressive feat, it also highlights a fundamental limitation of the Navy’s carriers in the European theatre. The fact of the matter is that a one-hundred-thousand-ton Nimitz or Ford-class carrier is too large and too vulnerable to operate in the confined space of the Baltic Sea. Moreover, advanced Russian shore and sea-based anti-ship cruise missiles pose a very real threat to the Navy’s aircraft carriers. It is telling that, by the Navy’s own admission, this is the first time the service’s carrier-based combat aircraft have participated in the forty-six-year-old exercise.

Russian forces armed with the NPO Mashinostroyeniya P-800 Oniks—which comes in air, ship, submarine and land-based variants—have the range to effectively hit any surface ship operating in the Baltic Sea from the Kaliningrad exclave to the Swedish coast. That is assuming a range of 300 kilometers or 186 miles for the export variant of the Russian Bastion-P coastal defense system that is armed with two Mach 2.5 capable P-800 anti-ship cruise missiles. Some Russian domestic versions of the P-800 are thought to have to a range of roughly 370 miles or just under 600 kilometers, which means that much of the Baltic Sea can be covered by Russian shore-based weapons.

Moreover, while the Russian Baltic fleet largely consists of older dilapidated vessels, whatever submarines, surface ships and combat aircraft Moscow does have in the region are equipped with formidable anti-ship weapons. Moreover, the region is heavily defended by other Russian weapons systems including the S-300V4 and S-400, which will pose a challenge for any American forces operating in the region during a conflict.

“Russia’s Baltic Fleet is not much of a naval force, but it can blockade Baltic ports for a while, mine them, and effect sea denial. Of course, the other problem is that all of U.S. forces will be within the arcs of Russia’s long-range air defense, operating at the mercy of Russian cruise missiles, artillery, and an initial air attack,” as Center for Naval Analyses research scientist Michael Kofman wrote for War on the Rocks. “One thing AirLand Battle didn’t have to deal with is S-400 air defense systems with 250 kilometer ranges, 350 kilometer-range Iskander-M tactical missiles, or 300 kilometer-range Bastion-P coastal missile defenses.”

The implications for the U.S. Navy is that not only are its carriers and surface ships vulnerable in the confined waters of the Baltics—save for the Lockheed Martin F-35C Joint Strike Fighter when it becomes operational—the service’s strike fighters are vulnerable to attack both in the air or even if they are operating from shore bases as they were in BALTOPS 2018. Russia has the capability to attack both carriers and land bases with long-range precision guided weapons, which is increasingly a problem for allied forces in Europe.

A potential solution to the Navy’s problem is to keep the aircraft carrier at standoff range—assuming that it is even necessary to use naval aviation in this theatre—and use aerial refueling tankers to extend the range of the F/A-18E/F—paired with stand-off weapons—EA-18G and the F-35C. That means that the Navy should continue work on the MQ-25 carrier-based unmanned tanker program, even if one could argue that the service could rely on the U.S. Air Force’s big-wing tankers in the European theatre. The fact is, during an all-out war with Moscow, Russian forces will likely target those Air Force tankers and their bases, which means the carrier air wing might have to rely on organic aerial refueling at least some of the time. But even then, a very capable enemy such as Russia might be able to intercept the MQ-25—which might mean that machine might also require some level of stealth in the future.