Would Russia Attack & Invade the Baltics? (And Could America's Military Stop Them?) 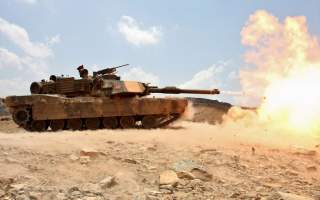 The current NATO force structure in Eastern Europe would be unable to withstand a Russian invasion into neighboring Latvia, Lithuania and Estonia, a new think tank study has concluded.

Latvia, Lithuania and Estonia could be likely Russian targets because all three countries are in close proximity to Russia and spent many years as part of the former Soviet Union

While the Pentagon’s European Reassurance Initiative calls for additional funds, forces and force rotations through Europe in coming years, it is unclear whether their ultimate troop increases will come anywhere near what Rand recommends.  Pentagon officials would not, at the moment, speculate as to whether thoughts and considerations were being given to raising forces levels beyond what is called for in the initiative.

"We are currently planning the future rotations of units through Europe. The heel-to-toe concept will increase how often they're here for the Armored BCT mission, but it won't increase how many are here at once -- that will remain just one at a time. We currently have some aviation assets on a rotation here but plans aren't yet firm on what that looks like going forward. We've requested additional funding for National Guard and Reserve manpower which may come in the form of full or partial units or even individuals," Cathy Brown Vandermaarel, spokeswoman for U.S. Army Europe told Scout Warrior in a statement.

Increased solidarity exercises would be designed to further deter Russia by showing allies cooperation along with an ability to quickly deploy and move mechanized forces across the European continent, Vandermaarel added.

Russia’s military maneuvers and annexation of the Crimean peninsula have many Pentagon analysts likely wondering about and assessing the relative condition of the former Cold War military giant’s forces, platforms and weaponry.

Russia’s economic pressures have not slowed the countries’ commitment to rapid military modernization and the increase of defense budgets, despite the fact that the country’s military is a fraction of what it was during the height of the Cold War in the 1980s.

While the former Cold War giant’s territories and outer most borders are sizably less than they were in the 1980s, Russia’s conventional land, air and sea forces are trying to expand quickly, transition into the higher-tech information age and steadily pursue next generation platforms.

Russia’s conventional and nuclear arsenal is a small piece of what it was during the Cold War, however the country is pursuing a new class of air-independent submarines, a T-50 stealth fighter jet, next-generation missiles and high-tech gear for individual ground soldiers.

During the Cold War, the Russian defense budget amounted to nearly half of the country’s overall expenditures, analysts have said.