Would Russia Really Sell the Deadly S-400 to Turkey? 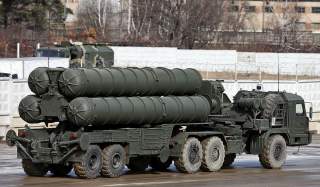 Russia is negotiating with Turkey to sell Ankara the advanced S-400 air and missile defense system. If the sale goes through, Turkey would be the first NATO member to operate the powerful Russian air defense system.

"The talks are continuing on the S-400,” Ibrahim Kalin, a spokesman for the Turkish government told the TRT channel in Russia according to TASS. “The defense industry’s secretariat and the president are receiving information about that. We are closely watching the negotiations. I don’t know whether we’ll have enough time to deal with this issue before a session of the High-Level Russian-Turkish Cooperation Council that will be held in Russia. But, of course, this theme will be raised at the level of the leaders."

The possibility of Turkey purchasing a Russian system has dawn mixed responses from analysts.

“I think this could be a genuine effort,” said Sam Bendett, a researcher specializing in Russian military affairs at CNA Corp. “It certainly makes the U.S., NATO and Israel take notice.”

Other experts such as Mike Kofman, a fellow specializing in Russian military affairs at the Wilson Center, are not convinced. “This is all a political leverage game,” he said. “Turkey is up to the same game as they were with China.”

Turkey had selected the Chinese-built HQ-9 air defense system in 2013 for a similar tender, but that effort was seen by many analysts as an effort to spur Western technology transfers. “It was a cheap Turkish attempt to get better terms from Western producers that would include some kind of technology transfer," Kofman said. “They are now trying the same tactic with Russia. As though Russia would transfer technology to them, helping to make the Turkish defense industry a stronger competitor—or as a secondary issue—sell its best air defense to a NATO country. Turkey is again using these talks to try and blackmail NATO countries into air defense sales.”

Bendett, however, believes that the Turkish effort to buy the S-400 could be genuine. “Turkey doesn't have a missile defense system that the S-400 would represent. At the same time, Turkey must have been paying very close attention to threats posed to Saudi Arabia by Houthi rebels and their sophisticated array of technologies that can directly threaten the Saudi homeland.”

Bendett said that the drive to acquire the S-400 is part of an overall Turkish drive to modernize their forces and achieve technological independence from the West. “This purchase is in line with Turkey's continued drive for military modernization that will have them designing, building and fielding a wide range of state-of-the-art land, air and sea-based weapons,” Bendett said. “This drive for military-technological independence is not complete without sophisticated long-range air missile defense system that S-400 represents.”

Kofman is skeptical about the prospects that Russia would sell Turkey an advanced weapon system like the S-400. “Why would Russia sell it to them? Especially given that they have contingencies with Turkey—as in they are always thinking about the fact that they may have a military incident with Turkey,” Kofman said.

Bendett, however, said that an S-400 sale would represent an opening for Russian industry in Turkey that Moscow has long coveted. “It represents Moscow's entry into a relatively closed-off Turkish military market that until recently was fielding exclusively NATO hardware, Bendett said. “As far as the shooting of a Russian Su-24 fighter-bomber by the Turks, it’s a safe bet that such confrontation is a thing of the past and an aberration in bilateral relations between Moscow and Ankara - both are interested in securing air and land space in and around Turkey.”