WWII Sherman Tanks: Back in Action in 2016 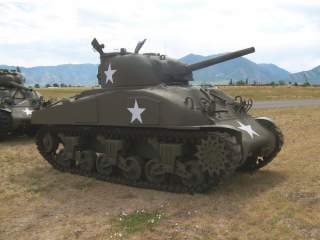 Paraguay is putting World War II-era M3 Stuarts and M4 Sherman tanks back into service. The country is thought to have three Shermans medium tanks and up to fourteen Stuart light tanks in its inventory.

The venerable tanks—which are now over seventy-five years old—were originally designed to fight the German Wehrmacht and Waffen-SS in Europe. Neither tank proved to be a match for the Nazi panzers on a one-for-one basis. But the combined Allied effort prevailed, and the Sherman would nonetheless continue to serve around the world for decades to come.

Paraguay decided to re-activate its M3 fleet in 2014, sources told IHS Jane’s, mostly for operational training purposes. Ten of the vehicles were overhauled with refurbished engines and received M2 .50-calibre machine-guns in place of the original Browning .30-calibre. Four tanks remain in storage, with one other machine being used as a gate guard. There are no further details about the status of the Shermans—which are still serving with Paraguay’s Presidential Escort Regiment.

The Shermans—which were delivered in 1980 from Argentina—and the Stuarts—which were donated by Brazil in the 1970s—have been hopelessly obsolete for decades. One could argue that the Sherman was already obsolete during World War II, where it was no match for the Wehrmacht’s Panthers or Tigers. But it was cheap and could be readily mass produced, which enabled the U.S. Army to overwhelm the Germans—especially with the aid of air power.

For a country such as Paraguay, the Sherman and Stuart are mostly for show. In a world where the leading ground forces are introducing or developing new armored fighting vehicles like the U.S. Army’s latest M1A2 SEP V3 Abrams, Russia’s T-14 Armata or Germany’s developmental Leopard 3 main battle tank, neither antique vehicle offers any relevant combat capability. Moreover, any training value is very limited. Modern tanks are very different in terms of fire control and other systems compared to a World War II-era antique.

Even the context of South America—where military technology is a generation or two behind the state-of-the art—the two tanks are better suited for display in a museum. In any case, Paraguay doesn’t have an immediate need for cutting-edge vehicles. The landlocked country is on friendly terms with its largest neighbors Argentina and Brazil. Meanwhile an old border dispute with Bolivia was settled in 2009, leaving the country with no real threats.