Yes, Now You Can Purchase Your Very Own Russian T-72 Tank or Air Defense System 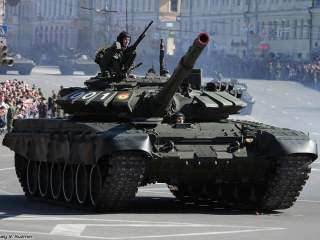 Do you need a Soviet-designed surface-to-air missile defense system to deter your neighbors? If so, a small U.S.-based arms broker named the Redfish Trading Company is offering to sell a complete Buk-MB complex—a Belarusian modification of the original Soviet-era SA-11 Gadfly air defense system—to a paying customer. The emailed sales pitch came with a detailed brochure outlining the technical characteristics of the weapon and an animation from Almaz-Antey showing off the capabilities of Russia’s layered integrated air defense system.

“In case you are interested or know of someone, we have the BUK complex ready for export,” wrote Jesse Clements, managing director of the San Antonio, Texas, based company, in a July 9 email. “It was designed for [the] MoD [Ministry of Defense] for a country but they could not obtain the financing. It was made 2 years ago. We do require USA State Dept. approval.”

Clements added that Redfish also has an inventory of over 100 upgraded T-72 main battle tanks to sell to a paying customer. “We also have over 100 units of T72 w/ upgrade/modification to T73 B3 <sic>,” Clements wrote.

While Redfish’s claim that it is offering the B3 version of the T-72 drew skepticism (indeed, one prominent expert on Russian military affairs noted that Moscow does not export the T-72B3 variant—which is reserved for Russian forces), such arms deals are not as uncommon as one might imagine. The U.S. government has procedures to allow for the export of such items—including high-grade military hardware—to third parties, according to experts.

One example is Century Arms—which was falsely accused of supplying weapons to the terrorists who perpetrated the Paris attacks in November 2015. Century Arms’ business model is to import Soviet-era weapons and then resell those weapons to both American and overseas buyers. While Century Arms mostly deals in small arms, it’s not unheard of for private companies to sell higher-end equipment such as older combat aircraft types to third parties. However, sales of modern top-of-the-line military equipment are much more rare.

“There are U.S. companies that export foreign-supplied arms from the U.S. I believe they purchase, store them here and then re-export,” said William Hartung, director of the arms and security project at the Center for International Policy. “What I'm less sure of is whether a U.S.-based firm would need a license for coordinating a deal where the equipment never touches U.S soil.”

Nonetheless, according to Redfish’s website, the company is diligent with securing U.S. government approvals for all of the myriad products that it offers. These products span the spectrum of military hardware from small arms, to tanks and artillery, to ships and fighter aircraft to entire air defense complexes and even satellites.

Redfish is but one company in a galaxy of entrepreneurial firms who sell military hardware across the globe in the murky world of arms dealers. While most deal in small arms, there are those operations like Redfish that export larger items such as tanks and combat aircraft. But while Redfish claims to play strictly by the rules, the sector includes many other firms that might be less than diligent.

Indeed, some of the experts I spoke to questioned how legitimate the Redfish company might be. “Seems odd that he would send out a note on this in a group email, as indicated by the  ‘Hello friends and associates’ greeting.  Quite an amazing web site though, including a listing of the categories covered by the U.S. munitions list—a suggestion that they are knowledgeable about the arms import and export laws and regulations,” Hartung said.

While it is difficult to gauge the legitimacy of Redfish and its sales pitch, this is a small glimpse into a usually shadowy world.