Yes, the U.S. Military Is Developing an 'Iron Man' Suit 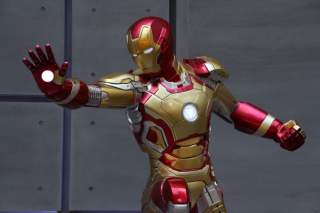 "The ultimate purpose of the TALOS project is to produce a prototype in 2018. That prototype will then be evaluated for operational impact,” Lt. Cmdr. Matt Allen, SOCOM spokesman, told Scout Warrior.

Industry teams have been making steady progress on the technologies since the effort was expanded in 2013 by Adm. William McCraven, former head of SOCOM.

Defense industry, academic and entrepreneurial participants are currently progressing with the multi-faceted effort.

It “transforms from liquid to solid in milliseconds when a magnetic field or electrical current is applied,” the Army website said.

“The idea is to help maintain the survivability of operators as they enter that first breach through the door,” Allen added.