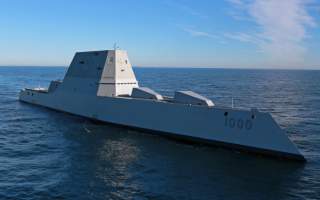 The Navy's new "first-of-its-kind," high-tech stealthy destroyer, armed with the most lethal weapons ever engineered onto a surface ship, is slated for commissioning on Saturday Oct. 15, in Baltimore, Md.

The ship will soon go to San Diego, Calif., where it will go through what’s called “ship activation" - a process of integrating the major systems and technologies on the ship leading up to an eventual live-fire exercise of its guns and missiles.

As part of this process, the Navy will eventually fire long-range precision guns and missiles from its lethal, stealthy new destroyer -- in anticipation of its ultimate deployment on the open seas, service and industry officials explained.

The new Destroyer, called DDG 1000 or the future USS Zumwalt, is a 610-foot land and surface warfare attack ship designed with a stealthy, wave-piercing “tumblehome” hull.

On Friday May 20, 2016,  the new ship was formally delivered to the Navy at Bath Iron Works in Portland, Maine.

"The U.S. Navy accepted delivery of the most technically complex and advanced warship the world has ever seen," Rear Adm. (select) James Downey, DDG 1000 Program Manager, said in a written statement.

“In the next phase, the Navy will be driving, connecting, integrating and proving the functionality of the ship systems such as the radar, sonar and gun. The Navy will test out the basics make sure the ship can work then by testing those components of the ship that actually make it a warship,” Wade Knudson, DDG 1000 Program Manager, Raytheon, told Scout Warrior in an interview.

The ship is slated to be commissioned in Baltimore, Maryland Oct. 15.

“Zumwalt's crew has diligently trained for months in preparation of this day and they are ready and excited to take charge of this ship on behalf of the U.S. Navy," Capt. James Kirk, commanding officer of the future Zumwalt, said in a written statement.

As the first Zumwalt-class destroyer is delivered to the Navy, construction of the second is already underway at Bath Iron Works, Portland, Maine. The DDG 1001, the Michael Monsoor, is already more than 75-percent complete and fabrication of DDG 1002, the future Lyndon B. Johnson, is already underway, Navy officials said.