The Kilo-Class Submarine: Why Russia's Enemies Fear "The Black Hole" 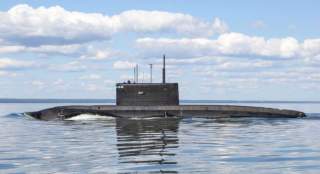