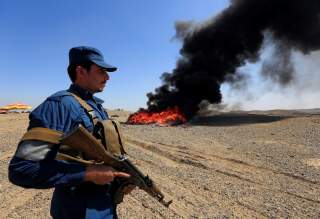 As the dust settles after the latest string of ghastly bombings in Kabul that took nearly 150 lives, including foreigners, the failure to prevent the attacks should be debated through one important prism: fixing the Afghan intelligence.

By any measure, the new wave of violence across Afghanistan is a forceful response by the Taliban—and, arguably, by Pakistan—to President Donald Trump’s new Afghanistan strategy, indicating that any American attempt to pressure them is not only ill-advised but it would fail. For Afghanistan, the recent spate of violence signifies important intelligence failures.

The events came amid a new push by the United States to nudge the Taliban to come to the table to negotiate peace, albeit with no results. This follows Trump’s public rebuke of Pakistan for its lies, deceit and support to terrorist groups. Since then, Taliban’s battlefield tactics have shifted to targeting urban areas and “softer” civilian targets.

The objective is clear: stoke fear through violence, humiliate and erode public confidence in the Afghan government, undercut the morale of Afghan forces, and fuel more tensions among the dysfunctional Afghan political class. For the Taliban, their new tactics have started to bear fruit as Afghans begin to point fingers at their security institutions for failing to protect them.

Unfortunately, such coordinated Taliban violence will recur unless a critical blind spot in Afghan security apparatus is addressed: poor intelligence. Afghanistan’s National Directorate of Security (NDS), the country’s principal spy service, bears responsibility for failing to preempt the Taliban assaults. The NDS has also been unsuccessful in the past to detect and thwart several large-scale attacks, both in Kabul and other major cities where Afghan intelligence maintains a sizeable presence.

To take one example, last April the Taliban evaded multiple layers of security before entering one of the six Afghan army combat corps that host over twenty thousand Afghan troops, killing over 140 soldiers. In May, the Taliban exploded a massive 1.5-ton truck bomb outside the German embassy in Kabul’s Green Zone, killing dozens of civilians. These and other incidents have left ordinary Afghans to become mere statistics. Data by the United Nations shows that every day on average eleven civilians and nearly twenty-one Afghan security forces have been killed since early 2017.

Unfortunately, the NDS, enabled by U.S. money and technology, faces crucial gaps in intelligence collection and analysis, as well as a strong leadership to proactively confront the Taliban’s new tactics. The agency’s human-intelligence presence across Afghanistan is insufficient and weak, its surveillance and reconnaissance capabilities are deficient, and its sabotage activities are negligible. In fact, the Taliban’s network of informants in many provinces is arguably stronger and more credible than that of the NDS, all while the insurgency miraculously manages to maintain its operational security.

At the same time, Afghan intelligence and security operations are often not in sync, and tactical operations typically lack intelligence-gathering components that produce information for future operations. Afghan forces have been trained as operators, not intelligence collectors, so they rely on NDS for information.

Crucial pieces of information are often missing, however, mainly because the NDS places little attention to its analytical functions to efficiently process and analyze intelligence collection. At times, the security directorate’s sources and ownership of information and its reliability have been dubious.

The directorate’s primary sources of information in the field tend to be local commanders, militia leaders, strongmen, and tribal elders who often provide erroneous or biased information to advance their own agendas, including settling personal vendettas. In other cases, NDS officers collect unreliable, low-quality intelligence from local villagers, shopkeepers and farmers that is often difficult to validate.

Corruption is also a problem. The spy service has been accused of nepotism and ethnic favoritism and has increasingly become politicized and factional. A large number of the agency’s personnel are recruited through political connections, rather than professional channels. Many NDS personnel maintain loyalty to their ethnic leaders rather than the agency and tend to act more like political leaders than spies. Few are trained in the arts of intelligence to effectively manage sources, recruit assets, analyze large volumes of information, and write time-urgent assessment reports. Few are properly vetted to handle classified information. In one past instance, a local militia leader was put in-charge of running the security directorate’s provincial office in Kandahar, the Taliban’s heartland. Meanwhile, the service suffers from mismanagement, lack of discipline and accountability in the chain of command, with several key roles left undefined and, in some cases, efforts are duplicated.

At the same time, endless meddling by Afghan political mafia, strongmen, and former intelligence chiefs in the agency’s internal affairs has resulted in significant leakages in the past, often compromising operational security. Senior Afghan officials have repeatedly claimed that Taliban forces and their patrons have cultivated a roster of insiders and informants in several Afghan civilian and military institutions, who feed critical information to the insurgency. In contrast, despite internal rifts in the insurgency, the NDS has done a poor job penetrating the Taliban ranks. One of security directorate’s effective wings is its special forces contingent, a small paramilitary element that conducts targeted counterterrorism operations, but its size and capabilities are limited and its grasp stretched thin.

It is therefore imperative to introduce necessary measures to reform the Afghan intelligence structure, especially professionalizing and depoliticizing its recruitment process. Serious measures should also include overhauling the directorate’s leadership edifice, both in Kabul and in the provinces, a modest surge in the agency’s human-intelligence assets in the field, bolstering its collection and analytical capabilities, and increasing its surveillance activities. What’s more, at least 50 percent of new recruits to the service should come from Afghan security institutions, especially the ministry of defense, and undergo a strong vetting process. Future training of Afghan forces should also include robust information collection requirements, enabling Afghan forces to assume dual roles as operators and collectors of intelligence. Meanwhile, the Afghan government should establish a special task force on intelligence and counterterrorism under the National Security Council’s umbrella and engage a small roster of experts, particularly red-teams, to special review and countervail directorate’s analytical products for clarity and credibility.

For now, it seems the Taliban is neither interested in peace nor a serious peace partner. The Afghan war has largely become an intelligence war and while it is unlikely the Taliban would stop its killing spree, given their string of successes, the role of Afghan intelligence as the first line of defense is paramount. The United States needs an honest reassessment of Afghanistan’s defense capabilities, particularly the NDS as the point of the spear, as it ramps up its combat-training role. It is convenient after attacks to point fingers or blame Pakistan. But this ignores the machinery of Afghan spy service, which if it were more competent and efficient would be able to detect, thwart and minimize future attacks. Otherwise, there will be more big surprises and Afghans deserve better.

Javid Ahmad, a nonresident fellow at West Point’s Modern War Institute, is a fellow at the Atlantic Council. The view expressed here are his own. On Twitter: @ahmadjavid.