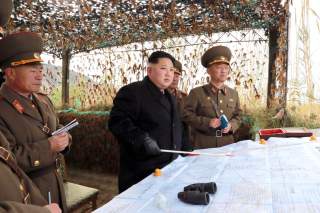 The diplomatic events of the decade are rapidly approaching. Later this week, President Moon Jae-in of South Korea will meet with Kim Jong-un at Panmunjom for the first inter-Korean summit since 2007. Shortly thereafter Kim will have a summit with President Donald Trump—the first such meeting between the sitting leaders of North Korea and the United States.

A steady stream of news and speculation has preceded the summits. Over the course of three days last week, Trump revealed that CIA director Mike Pompeo made a secret visit to North Korea around Easter to speak with Kim about the upcoming U.S. summit, South Korea announced that it is working to negotiate a peace treaty to officially end the Korean War, and Moon suggested that Kim would not demand the removal of U.S. troops from South Korea in return for denuclearization. For analysts and lay observers alike these developments raise some big questions that need to be answered in the two upcoming summits.

What Is Kim Jong-un Prepared to Give Up?

The most important issue up for discussion at the two summits is the denuclearization of North Korea. Kim indicated a general willingness to discuss denuclearization in talks with South Korean officials after the Pyeongchang Winter Olympics, but he has not provided many details about what denuclearization means for the North in the context of the upcoming summits. Getting more details from Kim about what he is willing to give up should be Moon and Trump’s first priority.

Nuclear weapons are Pyongyang’s ultimate insurance against regime change, and it is difficult to imagine Kim agreeing to dismantle his nuclear program without significant concessions and assurances from Washington and Seoul. Despite recent reports suggesting North Korea could accept a U.S. troop presence on the peninsula, effective reassurance will likely require some reduction in American military posture in South Korea.

A recent report in the South Korean press said that Pyongyang asked for a withdrawal of U.S. “nuclear and strategic assets” from the peninsula. Keeping nuclear weapons out of South Korea is an easy demand to satisfy since the United States withdrew the last of its forward-deployed nuclear weapons from South Korea in 1991. However, the withdrawal of “strategic assets” is a thornier issue because the North has not publicly provided any details about what capabilities fall under this category. The United States currently has two types of fighter aircraft capable of carrying the B61 nuclear gravity bomb (the F-16 and F-15E) and the F-35A is expected to be nuclear-capable as well. Would these aircraft be considered “strategic assets” even if there were no nuclear weapons in South Korea for them to carry?

Will Trump’s Unorthodox Approach Pay Off?

When the news of the Trump-Kim summit was first announced in early March many experts noted the oddity of a summit to begin a negotiating process. Traditionally, lower-level officials hammer out the particular of deals or agreements before leaders meet at a high-profile summit to resolve any lingering disagreements and announce a finished deal. Trump has turned this process on its head by agreeing to a summit with Kim at the start of a larger negotiation rather than at the end.

On the one hand, Trump’s unorthodox approach to diplomacy is risky. If the summit fails a peaceful resolution to the Korean nuclear crisis will be practically impossible. Trump is essentially making a double-or-nothing bet by having such a high level summit at the outset of negotiations. The bet could pay off, but a failure would most likely take future lower-level talks off the table for the rest of Trump’s time in office. Victor Cha of Georgetown University summarized the cost of failure on Twitter, “If it fails? The only thing after a summit is a cliff.”

On the other hand, the United States has tried the orthodox approach toward North Korea with little to show for it. While Trump’s approach has risks, it could also create opportunities that past attempts at diplomacy have missed.

Will Washington Feel Bound by the Results of the Inter-Korean Summit?

A final important issue to consider is the impact of the inter-Korean summit on the subsequent Trump-Kim summit. Moon has pushed very hard for diplomacy with North Korea since the Winter Olympics, which shouldn’t come as a surprise given his political record. There is a very good chance that the inter-Korean summit will be a success and produce some sort of framework for improved relations between the two Koreas. Indeed, Trump gave his “blessing” to the two Koreas to work on a peace plan for resolving the Korean War.

However, a successful inter-Korean summit offers no guarantee that the Trump-Kim meeting will go well. Most U.S. presidents would probably feel pressure to hew closely to an ally’s position, but Trump has not shied away from policies that strain the U.S.-South Korea relationship. The need to cooperatively apply pressure against Pyongyang has not stopped Trump from pressing Moon on free-trade negotiations and alliance burden-sharing issues. There is a real possibility of diverging summits wherein the inter-Korean summit is successful, but the Trump-Kim summit is not.

The upcoming inter-Korea and Trump-Kim summits will provide answers to these three questions. Hopefully both summits will be successful and the parties can begin the long and difficult work of resolving this crisis and achieving lasting peace in Northeast Asia, but success is not a foregone conclusion.