3 Reasons Russia's Bombers in Iran Were a Big Deal 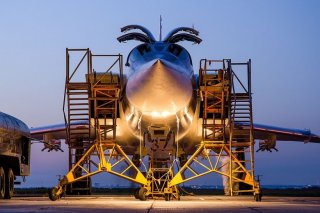 What are we to make of the Russian military's use of an Iranian air base last week as a staging point for airstrikes in Syria? U.S. intelligence officials have been working on this question and the U.S. State Department was caught flat-footed by the development. “[W]e’re trying to get a better assessment of what’s going on,” State Department spokesman Mark Toner told reporters in a briefing on August 17, but “fundamentally this isn’t helpful.”

On that last point, Toner is absolutely correct. From Washington's standpoint, theoretically still pushing for Syrian President Bashar al-Assad to leave (five years after President Obama made that declaration), a closer relationship between Moscow and Tehran means greater violence on the ground in Syria, more civilian casualties, more health centers and hospitals destroyed, and more time for Assad to consolidate his territorial gains, press his offensive in Aleppo, and make U.N. special envoy Staffan de Mistura's life even more miserable. Gen. David Barno, who once commanded coalition troops in Afghanistan from 2003-2005, called Russia's activity inside Iranian borders the quintessential Vladimir Putin move: “It reminds us again that [Russian president Vladimir] Putin wants Russia to be seen once more as a major military power—and one that will not be shy about poking the United States and its friends in the eye at every opportunity .”

Iran has downplayed Russia's use of one of its own airbases, calling it an extension of an intimate defense partnership against jihadist groups in Syria. And yet the decision to invite the Russians in was still so controversial that Iran's defense minister chided Moscow for bragging about the arrangement. The two sides may now be backing off the basing arrangement, so it would be tempting to treat it as a one-off event. In fact, it’s a big deal, both on the direction of Syria's war and on the broader political dynamic.

1. With a temporary presence inside western Iran, Russia's Tu-22M long-range bombers don't need as much fuel as their previous Russia-to-Syria journey. Less fuel translates into more weight available for the incendiary weapons that Russian pilots have been using to strike neighborhoods full of civilians. The fact that a lower amount of fuel is burned in transit to the bombing target provides more time for Russian aircraft to hover over the target or engage in repeated bombing runs. Taking off from Iran also makes the journey easier in terms of sovereignty concerns; Russian pilots no longer have to worry about crossing, say, Turkish airspace on their way to bombing missions in Syria. The alternative route through Iraq, a country that doesn't yet possess the capability to police its airspace, is safer for the pilots and less costly for the Russian government. Russian military officials will remember all of these factors when the time comes for Moscow to ask the Iranians to serve as hosts again—that is, if the Iranians will accept the request.

2. Gen. Barno's quip about “poking the United States...in the eye” is probably a big part of the equation too. Although the Hamedan air base is owned and operated by the Iranians and the Russians were only considered temporary guests, Moscow's use of the facility is one more way Putin can publicly embarrass President Obama and demonstrate how convoluted and shaky America's policy in Syria is. The Russians know what they want in Syria—the government in Damascus is their client state, and they will use military resources to prop up the regime and strengthen their position. That clears the way for getting the best possible deal when negotiations are back on. The United States, by contrast, is all over the place; to Washington, Assad is a cancer that enables terrorist groups like the Islamic State to survive, but he's not so cancerous as to risk a U.S. military engagement that could very well last longer and cost more than anticipated.

3. By inviting Russian bombers in, the Iranians have made history. Keeping Bashar al-Assad in his Damascus palace is important enough for Iran's foreign-policy interests in the region to break with thirty-five years of precedent—a precedent that included not inviting foreign military forces onto Iranian soil. But closer Iranian-Russian cooperation on Syria also puts to rest the optimism from some in the Obama administration that Tehran would partially moderate its behavior in the region after the signing of the nuclear agreement last summer. A compromise over Tehran's nuclear-enrichment capability and more frequent contact between U.S. and Iranian diplomats notwithstanding, the United States and Iran are still on the opposite sides of the Middle East's biggest conflicts.

There is one bright spot for the United States: inviting the Russians in was so sensitive in Iranian politics that Tehran pulled the plug when the noise got too loud. Iranian defense minister Hossein Dehghan assured the Iranian public that there was no written agreement with Moscow that would codify the short-term military arrangement. Iranian officials were clearly angry that the Russians drew so much public attention to cooperation that should have been kept under wraps. Whether this will discourage the Iranians from offering Russia use of its facilities in the future remains to be seen. What is crystal clear, however, is that Moscow is continuing to use Syria's conflict as a way to show off its strength.