A 3-Step Strategy for Trump on Ukraine 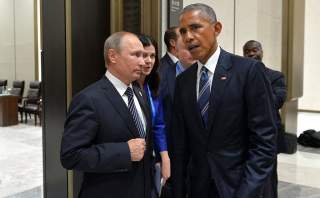 There are few higher foreign policy priorities for the new Trump Administration than addressing the highly disruptive and potentially catastrophic conflict brewing sinisterly in Ukraine. The annexation of Crimea, as well as Russia’s continuing military initiatives in the eastern Ukrainian Donbas region, represent egregious violations of international law. These actions have had a devastating impact on U.S.-Russian relations which have reverted to Cold War levels, undermining all constructive discourse.

Trump’s election campaign promised that, as President, he would initiate an entirely new approach to Russia, and deal with Putin and his inner circle by relying on his negotiating skills honed during his career in business. We believe that now is the time for Trump to take advantage of the opening afforded by his stunning election, and to approach Putin with a game changing proposal to deescalate the Ukrainian crisis, as well as to lay the foundation for a constructive program of reconciliation between the United States and Russia. The alternative — a continuation of the current policy — will only lead to further destabilizing rhetoric, a costly and dangerous arms build-up on both sides, and escalating military confrontations between NATO members and Russia.

The new Trump Administration can legitimately disavow prior U.S. policies which have so antagonized Putin, and which have been construed by Putin and his cohorts as threatening Russia’s vital national security interests. These include, in particular, NATO’s substantial eastern expansion since the end of the Cold War — increasing from 16 nations to 29 — as well as the foreign policy initiatives of the United States under the Clinton, Bush II and Obama Administrations. Actions in Serbia/Kosovo in 1999, in Iraq beginning in 2003, and in Libya in 2011, together with the “color revolutions” in former Soviet republics have been perceived by Putin as intended, directly or indirectly, to destabilize the current regime in Moscow. The prospect of Ukraine joining NATO was especially unsettling. Putin's address to the Russian Parliament on March 19, 2014, justifying the Crimean annexation, explained: “It would have meant that NATO's navy would be right there in this city [Sevastopol] of Russia's military glory and this would have created not an illusory, but a perfectly real threat to the whole of southern Russia.”

During the campaign, President-Elect Trump described the U.S. policies referenced above as deeply flawed, and he is ideally positioned to construct an entirely new U.S.-Russian relationship. The first order of business: Ukraine. In that regard, we suggest the following three-step strategy to begin the process of reframing relations:

1. First, Russia and the West should accommodate themselves to “agreeing to disagree” on the status of Crimea for the indefinite future. This was essentially the way in which the three Baltic countries were viewed diplomatically from 1940 through the demise of the USSR. It is hardly an elegant or an even satisfactory solution, but, at least, it is a doable one, justified by the on-the-ground reality.

2. Second, the parties must agree to maintain the status quo of Donbas as part of Ukraine, with an effectively enforced cease-fire.

3. Third, the United States, Europe, Russia and Ukraine should jointly evaluate and create a total aid package to achieve economic recovery in Ukraine. This should occur at the foreign affairs/secretary of state level. The premise is that the creation of an economically and politically viable Ukraine is in the long-term interest of all parties, including Russia. Addressing the “details” of formulating such an aid package may provide a framework for the parties’ resolution of underlying, and admittedly complicated, political issues. This initiative should come from the new Administration, as an early signal that Putin is not being ignored, and that the President-Elect wishes to work with him to restore the U.S.-Russia relationship to a constructive one.

Billions of dollars will be required for meaningful economic assistance for Ukraine, the distribution of which must be strictly monitored. This includes (a) monies for the restoration of infrastructure services; and (b) funds to compensate the tens of thousands of refugees and civilians still in their homes for their financial losses and injuries sustained.

Among the merits of this approach is that each party can devise its own formula, and articulated justification, for its share of the necessary monies to fund various projects. That is, each party can define “success.”

Ukraine may characterize monies originating from Russia as an indirect “reparation” or its equivalent for the annexation of Crimea and the destruction wrought in eastern Ukraine. Russia, however, can view such funding as payments to create a reliable trading partner for Russia and/or to compensate Ukraine for foregoing special trade concessions offered from Europe. The ultimate status of Ukraine vis-a-vis the European Union can await later developments.

The current leaderships of Russia and the United States have very differing perspectives of their own national interests. That was also true during the Cold War period. After President-Elect Trump assumes office in January 2017, the proposed initiative outlined here, or some variation thereof, may provide a beginning for a path out of the ominous political quagmire, which now entraps both nations, and which poses an existential threat to the entire world.

Jeffrey Burt, James Hitch and Peter Pettibone served as partners of prominent international laws firms, heading the Soviet and Russian practices of Arnold & Porter LLP, Baker & McKenzie, and Hogan Lovells, respectively. Thomas Shillinglaw was the lawyer for Corning Inc.’s projects in that part of the world. The authors spent decades negotiating transactions and resolving disputes in the USSR, Russia, and Ukraine involving their clients and government officials and state and privatized enterprises at local and national levels. They have served on many inter-governmental advisory committees, as well as in various leadership positions for the American Bar Association and international trade and arbitration organizations relating to those countries.