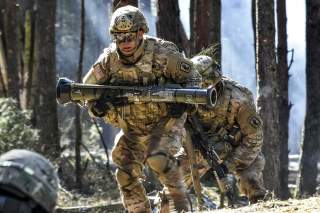 When President Donald Trump signed the massive omnibus spending bill last month, he did so fleetingly and reluctantly. He called it a “ridiculous” piece of legislation that made a mockery of Congress as an institution, and he sternly made a promise: "I will never sign another bill like this again.”

The only reason Trump swallowed his disgust for the bill was because the U.S. military received a substantial windfall of cash courtesy of the American taxpayer. The 2018 omnibus threw $700 billion into the military’s coffers, a mountain of a figure that the bureaucrats and pencil pushers in the Pentagon never had to work with before.

Much of that money would be put aside for the purchase of new F-35 fighter aircraft, a slight increase in active-duty personnel and a desperately needed refurbishment of the U.S. Air Force’s munitions stockpile. Yet a significant share of the defense budget will go towards active-duty operations that the U.S. military continues to conduct around the world, many of which have been going on for well over a decade and tertiary to core U.S. national security interests; and others that have evolved into a never-ending game of whack-a-mole with no discernible or attainable objective.

Eight months after President Donald Trump unveiled his new South Asia strategy, the seventeen year of the war in Afghanistan is as stalemated and convoluted as it was before the White House authorized more than 3,000 additional U.S. troops into the fight. The administration’s new strategy for Afghanistan is not so much new as it is the continuation of an old plan with a few more resources and indefinite timetable. The only thing different between then and now is a lot more Taliban targets have been blown up by the U.S. Air Force, a fact that the commanders managing the war effort are keen to point out during every press briefing. Indeed, the Pentagon is making a concerted effort to sway folks at home that the ongoing war strategy is not only new, but also improved. "With the conditions-based strategy now, the Taliban is looking at perpetual war that they cannot win,” declared Chairman of the Joint Chiefs Gen. Joe Dunford after a recent trip to the war zone last month.

True enough. But the flip side is also true. Despite 15,000 American soldiers, the Pentagon’s new Security Force Assistance Brigades doing the training and advising, a $45 billion a year price tag and backup from the best air force in the world, the United States and the Afghan government cannot win either. The war is a hopelessly intractable situation in a fractured, poor, corrupt and mind-bogglingly complicated country that has not seen peace in nearly forty years. Taliban strength—estimated at around 60,000 by those who track the group—is large enough to pose an existential threat to the government in Kabul for years to come. And as long as Pakistan continues to act more as an adversary than a friend on Afghanistan, no amount of bombing from the air will compel the Taliban insurgency to participate in a credible peace process or reconcile with a corrupt Afghan national authority. U.S. troops are being placed in a dubious situation, forced to provide military and financial support to keep the government in Kabul from falling apart.

The U.S. Air Force has served as Saudi Arabia’s gas station in the sky for the last three years. Saudi Arabia, of course, is bombarding Yemen with an extreme amount of explosive ordinance, betting that enough bombing, starvation, and disease will force the Houthi rebellion—now controlling the Yemeni capital and much of western Yemen—to rush to the negotiating table. When Riyadh first launched its military campaign, Saudi generals predicted a short war of at most a few months before the Houthis collapsed and withdrew back to their caves in the Yemeni highlands. The assessment was always unimaginable, but the Saudis seemed to genuinely believed it.

The conflict in Yemen has just passed its three-year mark, so clearly predictions of a swift victory have proven to be wildly off the mark. The war, meanwhile, has only gotten worse. Yemen is now a nation-state only in the strictest meaning of the term. A little under 80 percent of the population requires some quantity of humanitarian assistance; at least half of the nation’s hospitals have been destroyed or rendered inoperable; and over seven million Yemenis are straddling famine.

It has always been a mystery why the United States would stick its nose in this internal conflict (after striking a nuclear deal with Iran that the Saudis never supported, backing up Riyadh in Yemen may have been seen as some sort of compensation). Yemen is an insignificant player in the Middle East, and U.S. foreign policy in the region will go on as it has regardless of which armed faction happens to sit in Sanaa at any given time. Catering to Crown Prince Mohammed bin Salman is not a good enough reason to taint America’s moral status by getting dragged into the gutter of this man-made humanitarian catastrophe.

The fight against the Islamic State is almost over. The caliphate is gone. Its ranks have been cut down to a few thousand fighters in the Middle Euphrates Valley and along the sparse desert border with Iraq. President Trump wants to withdraw U.S. troops as soon as his generals can report to him that the objective of annihilating ISIS is complete. While Trump has reportedly agreed to maintaining a U.S. troop presence in Syria for the time being, one adviser commented that the president has no intention or desire in keeping American troops in Syria over the long or even medium-term. As one official told Reuters this week, "He’s not going to tolerate several years to a half decade.”

The president should go a big step further. Several years should be out of the question, but so should the remainder of the year. It is simply not the U.S. military's responsibility to perform “stabilization,” a word that connotes a permanent military deployment dangerously skewing the lines towards peace-building and peacekeeping. This is essentially what U.S. troops are doing in the northern Syrian city of Manbij right now, where Americans are riding in combat vehicles and constructing checkpoints to keep Syrian Kurdish factions and Turkish troops from going to war with one another. The longer the United States is in Syria, the greater the likelihood Washington will conduct missions that are completely tangential to the original task at hand. The solution to Syria’s political fissures are in the hands of Syrians and Syria’s neighbors, not a foreign power like the United States.