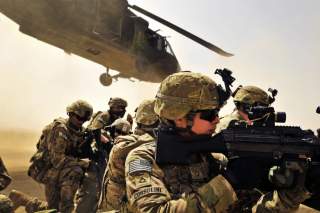 I’ve often railed against the foreign policy elite in this country and the often illogical and ineffective plans they support. But it occurs to me there is a much bigger problem at play. It’s not merely a matter of a flawed policy here or a bad decision there. The heart of the problem is much deeper. The majority of America’s increasingly defective foreign policies grow out of an unsustainable and flawed worldview.

Many on both the right and left in the United States believe America has an obligation and a responsibility to help those who want democracy to have it. There are some major problems with this belief.

On the first point is the very definition of democracy itself. When we say it is a universal human desire to live free, we subconsciously mean freedom in the American style. Thus, we believe that all who live under any other type of government are oppressed and in need of deliverance. That is one of the key beliefs that have underpinned our support of regime change as enduring American policy.

We claimed the people of Iraq deserved liberation from Saddam Hussein, even aside from the weapons of mass destruction claim. Libya was suffering under a totalitarian rule, and we supported the downfall of Qaddafi. We currently believe that Assad in Syria and the ayatollah in Iran don’t deserve to rule and should be overthrown or replaced. We celebrated the Arab Spring when many “threw off the shackles” of oppression, and we rejoiced during the Color Revolutions that took place in Europe following the dissolution of the Soviet Union.

Yet not a single one of those countries is better off today than they were before the regimes fell or governments upended. In the aftermath, some are muddling through while struggling to keep things together. Others are flatly worse off and a few—like Iraq, Libya and Afghanistan after their leaders were removed by the application of lethal military power by the United States—have been unmitigated disasters. We supported, encouraged or directly overthrew the existing governments in each of those nations (and in a few cases covertly aided in the upheaval), yet our avowed goal of giving the people more freedom and a better life has not been realized in a single case.

We Americans must face this unpleasant truth: the actions we’ve taken as a nation in the belief that our country has a moral obligation to use our power to help others have utterly backfired, resulting in the deterioration in the quality of life in the very places we’ve tried to help. Changes, therefore, are mandatory.

First and foremost, our foreign-policy elite must recognize that America is not a magician, and accept that sometimes our desires can’t be translated into reality; there is limit to power.

Secondly, there needs to be a humble recognition that our chosen methods to help have failed far more often than they’ve succeeded; no one benefits if our tactics ultimately worsen conditions.

Fourth, we must reestablish diplomacy to primacy and return military force to a subordinate role in the conduct of foreign relations; we presently have an unhealthy addiction to the use of lethal force to get our way.

Fifth, reorienting our military from one whose primary purpose is to intervene in and occupy other nations to one designed to guarantee the security of the American homeland, airspace, cyberspace and coastal regions. Our military power has been severely weakened over the past few decades by its dissipation in occupation duty and endless counterinsurgency fights. The security of the United States is weaker as a result. We must return the primary focus of the Department of Defense to countering existential threats, while maintaining a strong secondary focus on countering terror threats.

Elevating diplomacy while reorienting and rebuilding the military will allow policymakers to more effectively husband limited U.S. resources and find better economic opportunities for American companies. This reordering of national priorities will include robust engagement with the rest of the world, help us more effectively promote freedom and opportunity and create a more stable global security environment. Ultimately, Washington will be more effective in helping those in other states by reducing military intervention while increasing its diplomatic and economic engagement with the rest of the world.

America is a great and powerful nation because a can-do attitude is imprinted on our DNA. Our people in the main are kind and generous. We don’t let difficulties and challenges dissuade us, often relishing those times we turn the impossible into reality. The downside to that mindset is that sometimes we believe we can always make the impossible happen. Fortunately, another of America’s positive attributes is the possession of common sense. We may stubbornly beat our head into a brick wall, but eventually we’ll recognize doing so is unprofitable and we’ll make necessary adjustments.