After Mosul, Rebuilding Iraq Will Be Just as Painful This Time Around 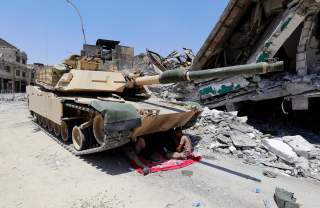 Editor's Note: In our latest Facebook Live interview (please like our Facebook page to see more of these events) Harry Kazianis, Director of Defense studies at the Center for the National Interest, sat down with Lt. Col. Daniel L. Davis (Ret.), a senior fellow at Defense Priorities, to discuss what is next for Iraq

Daniel Davis recently visited Iraq and interviewed residents of Mosul. An excerpt of the article can be found below:

Image: A tank of Iraqi security forces is seen during fighting between Iraqi forces and Islamic State militants in the Old City of Mosul, Iraq July 6, 2017. REUTERS/Ahmed Saad.