America Can't Afford to Keep Losing the War in Afghanistan 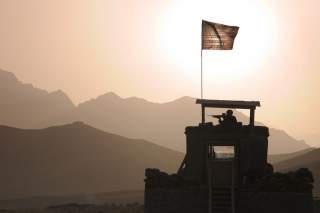 The Taliban raised their white flag in parts of Baghlan Province in Afghanistan on April 7, just one month after Afghan forces had recaptured the Baghlan’s Tala wa Barfak District from the terror group. Like in Baghlan, the Taliban seek to extend their influence in provinces where they already have a presence. As the Taliban launch their spring offensive, the Trump administration has yet to announce its strategy for the war in Afghanistan.

Gen. John Nicholson, the top U.S. commander in Afghanistan, told the Senate Armed Services Committee in February that the security situation in Afghanistan was at a stalemate. He estimated that an additional several thousand troops would be needed to reverse that stalemate. Gen. Jospeh Votel, commander of the U.S Central Command, made a similar assertion to the committee in March.

We have already had more than three troop surges in the country.

In the first year of the Obama administration, Gen. Stanley McChrystal requested the deployment of forty thousand troops to Afghanistan to reverse the momentum of the Taliban. He warned of a “mission failure” without the troop surge. Obama approved the initial deployment of thirty thousand troops and gradually increased it. In 2010, at the peak of the surge, one hundred thousand U.S. soldiers were deployed in Afghanistan. That is more than ten times the number of present troop levels in Afghanistan. However, the increase in troop levels did not defeat nor reverse the momentum of the Taliban insurgency. In fact, the Taliban grew stronger.

Since the NATO mission began, the Afghan National Army has significantly developed its counterinsurgency capabilities. Still, the casualties inflicted by the Taliban increases yearly at unprecedented rates. Within the first eight months of 2016, the Afghan forces suffered fifteen thousand casualties. Although, the current level of recruitment in the army replaces the number of losses they are suffering, those losses demonstrate that the Taliban insurgency is not getting any weaker. Despite the counterinsurgency efforts by the United States and NATO, the Taliban continues to challenge the Afghan government.

Academic research has shown that foreign safe havens, financial support and training camps are conditions that sustain an insurgency. Such conditions fuel the Taliban insurgency. Since 1993, Pakistan’s Inter-Services Intelligence has been training, harboring and funding the Taliban to undermine the Afghan government. Pakistan uses the Taliban as a proxy to exert influence in Afghanistan.

Defeating the Taliban is not possible without eliminating its safe havens in Pakistan. The Taliban uses the Federally Administered Tribal Areas in Pakistan to recruit, train and arm militants. Like in Baghlan, the military gains by the Afghan army outside urban areas are not sustainable in the long-term because of the influx of new Taliban fighters from Pakistan’s tribal areas that challenge the gains of the Afghan army.

Last year, Mullah Rahmatullah Kakazada, a key member of the Taliban movement, told the Guardian that if Pakistan did not give them safe havens, their insurgency would not last a week inside of Afghanistan. Similarly, last September, Richard Olson, former U.S. Special Representative for Afghanistan and Pakistan, testified before the Senate Foreign Relations Committee that “one of the conditions that would be most helpful for getting the Taliban to come to the table would be if they felt greater insecurity about their safe havens in Pakistan.” The safe havens in Pakistan are—and will continue to be—the source of the insurgency.

Likewise, in an interview with PBS in 2006, Peter Tomsen, the U.S. Ambassador and Special Envoy to Afghanistan from 1989 to 1999, was asked whether there could be success in Afghanistan without addressing the question of the sanctuaries in Pakistan. He said, “I don’t think so . . . as long as the situation is like it is today, where the Taliban . . . are able to use Pakistani territory to mount attacks into Afghanistan, it’s going to destabilize the already fragile situation in the country . . . Five years from now, we will be at the same position we are today, or it will be worse. So if we want to reverse this plateau situation or a negative trend that’s under way in terms of security, certainly, inside Afghanistan, we have to start with Pakistan.”

While generals are trained to think militarily to resolve conflicts, a political solution is required to eliminate the Taliban’s safe havens in Pakistan. To end the Taliban insurgency, the Trump administration needs a diplomatic solution that would raise Pakistan’s cost for supporting the Taliban instead of expending U.S. efforts in Afghanistan.

Experimenting with another troop surge will not reverse the stalemate in Afghanistan. Despite the changes in troop levels throughout the war in Afghanistan, whether it was one hundred thousand troops in 2010 or the current 8,400 troops, the Taliban continues to run its brutal insurgency.

The failure to defeat the Taliban militarily in the past fifteen years should argue against another troop surge.