America Can't Afford to Support an Independent Kurdistan or Taiwan 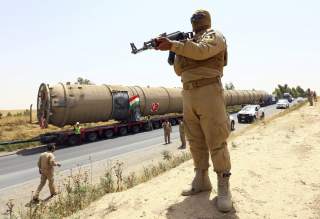 Iraqi Kurdistan’s just-completed referendum regarding independence from Iraq has provoked an overwhelmingly negative response in the Middle East and beyond. There is no question that most Kurds support transforming their highly autonomous region in northern Iraq into an internationally recognized independent state. The “yes” vote in the referendum was a whopping 92 percent.

However, the Baghdad government understandably regards the move as a threat to Iraq’s territorial integrity. Neighboring countries, especially Turkey, Syria and Iran, which have sizable Kurdish minorities, similarly view the referendum and what it symbolizes as a menace. Tensions are spiking, and a military crisis may be brewing. Baghdad and Ankara already have threatened joint economic retaliation—and perhaps even military measures—in response to the pro-independence vote.

On the other side of the world, a similar situation is simmering with respect to Taiwan. Although a crisis there is not as imminent as the Kurdish confrontation, growing tensions between Taipei and Beijing are reaching alarming levels. The vitriol that Chinese officials are directing at the Taiwanese government of Tsai Ing-wen, which include highly personal attacks on Tsai, has spiked dramatically over the past eighteen months.

Both situations illustrate an irreconcilable tension between abstract concepts of justice and geopolitical realities. A solid case can be made that both the Kurds and Taiwanese constitute distinct nations and cultures deserving their own independent states. The victorious allies in World War I promised the Kurds that they would establish a separate Kurdish homeland. Fulfilling that commitment, though, would have greatly antagonized the much stronger and more numerous Turkish and Arab populations. The European colonial powers, therefore, reneged on their promise and parceled out the Kurds to the successor of the defunct Ottoman Empire (Turkey), Persia (Iran) and the newly created entities of Syria and Iraq.

Restless Kurds have tried to reverse that decision throughout the subsequent decades. They exploited an opportunity to take the first step when the United States led the assault to overthrow Saddam Hussein’s regime. The Kurds created an independent state in all but name in northern Iraq, establishing a separate flag, currency and army, and thwarting Baghdad from having any meaningful control over the region’s economic policies.

Kurdish fighters in neighboring Syria similarly have exploited the unraveling of that country to gain control over a wide swath of territory in the north. Although not officially recognized by the international community, there is now a Kurdish-governed region there similar to the situation in northern Iraq. It is likely just a matter of time before activists attempt to link the two territories.

Taiwan has been even more successful in controlling its own affairs. The population has moved far beyond the situation that existed when Chiang Kai-shek’s Nationalist Chinese regime fled the mainland in 1949 and relocated to Taiwan. As the decades passed, a new generation of Taiwanese leaders (increasingly native-born) consolidated and intensified the island’s de facto independence. Today, Taiwan is a first-rate economic power and a vibrant democracy. A solid majority of the population identifies as Taiwanese, not Chinese. There is very little sentiment for political reunification with the mainland, especially when a communist dictatorship rules that territory. Indeed, the Democratic Progressive Party, which now controls both the presidency and the legislature in Taipei, has long been committed to the goal of Taiwan’s formal independence.

In terms of fairness and justice, both the Taiwanese and the Kurds deserve to have independent countries. They have distinctive languages, cultures and histories. In Taiwan’s case, it has been governed from the mainland just four of the past 122 years. From 1895 to 1945, it was a Japanese colony, and from 1949 to the present, the island has had a government separate from and hostile to the communist regime in Beijing. Taiwan’s political, economic and social development has been very different from that of the mainland.

The Kurdish case is a little less clear cut, but there is still a credible basis for an independent homeland. Kurds have a language and culture quite distinct from Arabs or Persians, and they have a history of being mistreated by both. Saddam’s brutal rule was undoubtedly the worst, culminating in the 1988 poison gas attack that killed thousands of Kurdish civilians. But the Turkish government’s conduct over the decades has been harsh, and Iran’s behavior, especially during the Shah’s reign, has been little better.

However, the world is not fair and just, and powerful geopolitical realities argue against either population’s achieving its goal. Indeed, attaining independence would lead to major regional disruptions and the likelihood of catastrophic wars. Even a geographically limited Kurdish state would redraw the map of the Middle East, fragmenting both Iraq and Syria, with unpredictable consequences. A comprehensive Kurdish homeland would have to include most of southeastern Turkey, since roughly 50 percent of all Kurds reside there. That development would truncate Turkey, thereby greatly reducing the viability and influence of a major U.S. NATO partner. The existing countries are unlikely to accept either version of a Kurdish homeland without a fight.

The consequences of the push for an independent Taiwan could be even worse. Chinese leaders are implacable in opposing such an outcome, and there are indications that their patience with Taiwan’s continued unwillingness to negotiate an agreement for reunification is wearing thin. The Taiwanese themselves see evidence that Beijing is setting an implicit deadline of 2020 or 2021 to resolve the island’s political status to China’s satisfaction or use of force to do so will be a viable option. An outbreak of war in the Taiwan Strait would be calamitous for both the security of East Asia and the global economy.

Both Kurdish and Taiwanese political ambitions put the United States in an awkward and potentially dangerous position. Washington regards Kurdish fighters in Iraq and Syria as capable, reliable allies against ISIS, and both the Obama and Trump administrations provided material assistance to those forces. The nature of the dilemmas for U.S. policy, though, is evident as Turkey’s military has repeatedly attacked those same Kurdish units. U.S. officials are caught in a severe bind. Despite substantial domestic admiration (especially among neoconservatives) for the Kurdish war effort, and for the overall Kurdish political agenda, two key U.S. allies, Iraq and Turkey, adopt the opposite stance. The Trump administration desperately tries to square the circle—continuing to support Kurdish anti-ISIS actions but opposing the independence referendum and the agenda of an independent Kurdistan. It may well prove to be a stance that satisfies no one.

Washington’s plight with respect to Taiwan has the potential to be even worse. Under the 1979 Taiwan Relations Act, the United States is obliged to regard any Chinese attempt to coerce the island as a grave threat to the peace of East Asia. Washington is also committed to continue selling Taiwan weapons “of a defensive nature.” Beijing objects strongly to both provisions as unacceptable interference in China’s internal affairs. The stage is set for a U.S.-China military showdown at some point. It is hard to see how the impasse between Taiwan’s insistence on maintaining at least de facto independence and China’s insistence that the Taiwanese commit to reunification can turn out well.

U.S. leaders need to put America’s interests first regarding both of these situations. One can legitimately empathize with the goals of both the Kurds and the Taiwanese. But the United States should not risk becoming entangled in armed conflicts to support those objectives. Instead, we need a prompt strategy to reduce our risk exposure.

Image: A member of the Kurdish security forces takes up position with his weapon as he guards a section of an oil refinery, which is being brought on a truck to Kalak refinery in the outskirts of Arbil, in Iraq's Kurdistan region, July 14, 2014. REUTERS/Stringer