America Has Nothing to Lose in Talking to North Korea 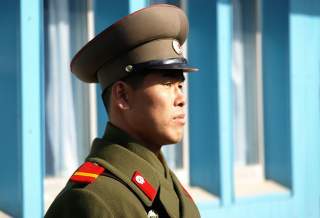 If Iran’s ballistic missile launch two weeks ago was a prime opportunity for President Donald Trump to sound tough and resolute, North Korea’s testing of an intermediate range missile over the weekend was the first time that the forty-fifth president had to deal with a crisis during the late hours of the night—at his vacation home, no less. Indeed, Pyongyang’s test occurred about a week after Defense Secretary James Mattis visited South Korea and Japan during his first overseas trip, and on the same night that Trump was hosting Japanese prime minister Shinzo Abe at his palatial Palm Beach resort, Mar-a-Lago. The message from Kim Jong-un seemed to be crystal clear: we don’t care about your Twitter posts, and we’re going to keep developing our missile capability as long as Washington continues its “hostile policy” towards North Korea.

Like clockwork, the foreign-policy establishment in Washington responded to Kim’s latest act of belligerence with the usual recommendations. Sen. Cory Gardner, a member of the Foreign Relations Committee, pressed for additional economic sanctions “to send a message to Kim Jon un that we remain committed to deterring the North Korean threat.” The U.S., South Korean and Japanese delegations called for an emergency UN Security Council meeting on North Korea for Monday, which will supposedly culminate in yet another statement denouncing yet another North Korean missile test as a violation of countless Security Council resolutions. We can expect more poking and prodding of the Chinese in the hope that Xi Jinping will see the wisdom of pressuring his frenemy across the border to give up his nuclear weapons and ballistic missiles unconditionally, without reservation. The result of all of this will likely be the same: more missile tests from Pyongyang, more talk about tweaking or refining the sanctions to make them more effective, and more griping directed Beijing’s way for being a Kim enabler.

North Korea is the problem that withstands the test of time. It goes without saying that successive U.S. presidents, Democrats and Republicans alike, have been unable to resolve it. Bill Clinton tried the negotiating track, which culminated in the Agreed Framework, a deal that at least temporarily suspended Pyongyang’s plutonium program before the Bush administration scrapped it. Bush eventually saw the wisdom of striking an agreement with Kim Jong-il, but not before placing it in the “axis of evil” camp, which all but shut the door to serious interactions between the two countries until the end of Bush’s second term. Barack Obama’s strategic-patience policy, which in effect was a combination of increasing the U.S. deterrent, throwing more sanctions at the problem and containing the Kim dynasty’s nuclear program, did nothing but make the problem an even more potent one for his successor.

By the end of his first term, Trump could be confronting a North Korea that possesses the capability of striking the U.S. homeland with an intercontinental ballistic missile. And yet, despite the urgency of the problem that the Trump administration now faces, Trump is being asked by the same people to consider the same policies that helped bring us to this situation—policies that over the long term haven’t been particularly successful in derailing Pyongyang’s nuclear or missile progress, let alone resolving it.

Over the short term, we can expect tactical moves by the United States. Washington will inevitably press the Security Council for even more stringent sanctions, not knowing of course whether China would be at all interested in risking the Kim regime’s stability in order to do America’s bidding. The deployment of the Terminal High Altitude Area Defense (THAAD) antimissile system will be sped up, partly as an assurance to the South Koreans that the Trump administration is just as committed to the U.S.–South Korea alliance as previous U.S. administrations have been. All of these decisions, however, will largely be geared towards short-term aspirations and won’t do much—if anything—to tackle the North Korean problem at its core.

That will only come, if this scenario is still possible, after comprehensive bilateral negotiations between the United States and North Korea—the kind of diplomacy that the establishment in Washington would consider naïveté at best and appeasement at worst (there is very little Republicans and Democrats agree on these days, but punishing North Korea brings everybody together). Negotiations, naturally, are more unlikely than not to succeed in anything tangible. The North Koreans will ask for the moon and more, and it will be difficult for U.S. diplomats not to laugh when they hear their North Korean counterparts demand ridiculous concessions during the opening round, like a decrease in U.S. troop levels on the Korean Peninsula, an end to U.S.-South Korea military drills and a termination of America’s “hostile policy.”

But history has proven that diplomacy with Pyongyang isn’t the disaster that its critics often proclaim it to be. For all its faults, the 1994 Agreed Framework that was struck during the Clinton administration wasn’t Munich II, as John Bolton always claimed it to be: as Jeffrey Lewis of the Monterrey Institute has written, that agreement shut down Pyongyang’s plutonium weapons program for a solid eight years—a fact that often gets overlooked thanks to the dramatic way that the deal unraveled. Additional deals have been reached with the North Korean leadership as well. And while all of these have eventually collapsed, due to mistrust between the parties or outright violations by Pyongyang, the fact that missile moratoriums have been reached in the past is proof (however little) that talks don’t have to be a dead letter. They should always be an option in America’s toolkit.

North Korea’s missile test last weekend is one more demonstration that the status quo isn’t good enough. What North Korea hawks don’t seem to recognize is that we’ve generally followed their advice over the past two decades, with very little to show for it other than more North Korean nuke tests, more nuclear weapons in North Korea's arsenal and the very frightening prospect that Pyongyang could wield an ICBM over America’s West Coast. It might be time for some shrewd—albeit frustrating and politically toxic—negotiations. What better person to explore the possibility of the diplomatic option than a shrewd businessman-turned-politician who ran on shaking up the establishment, rewriting the rules and making good deals for America?